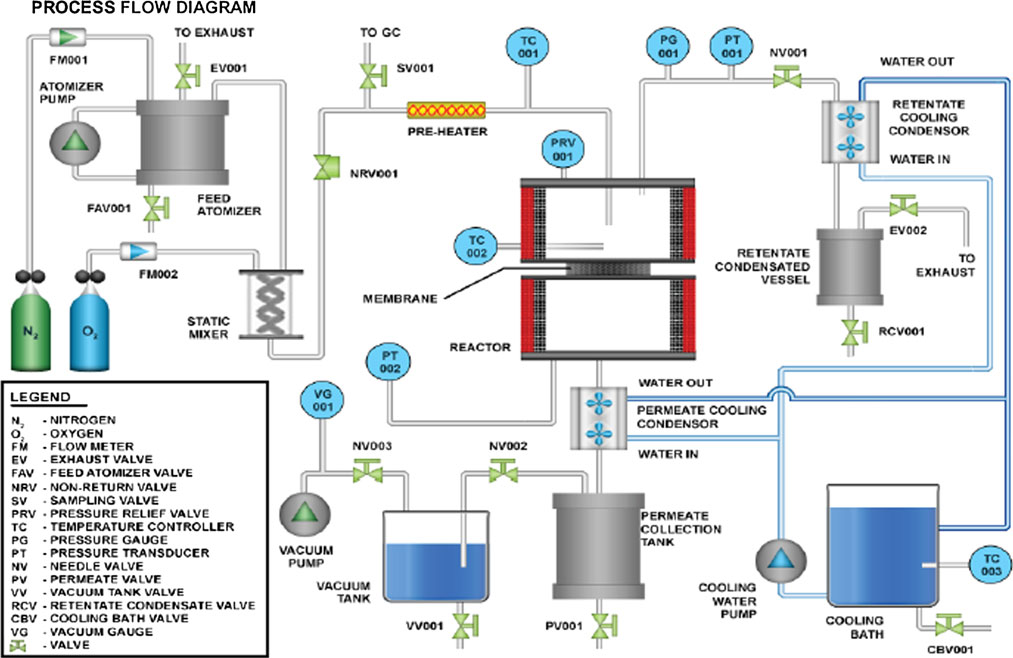 J Sol-Gel Sci Technol Fig. 1 Schematic diagram of liquid permeation membrane test rig 2.2.4 Preparation of AlOOH sol with CNTs-VxOy catalysts Table 1 Independent variables and their coded and actual values by addition of PVA following peptization used in the response surface study To prepare a suspension of c-Al2O3 sol embedded with CNTs-VxOy catalysts, 20 ml of boehmite sol was dilutedwith deionized water and then mixed with 0.04 g of CNTs- VxOy and 40 cc of a solution of 0.8 g of PVA and 100 g water. The prepared sol contained 10 % CNTs-VxOy. The Temperature (°C) mixture was then placed in an ultrasonic water bath with a frequency of 37 kHz, a power of 150 watt and a temper-ature of 85 °C for 30 min to disperse the catalyst bundles procedure described in Sect. to form a boehmite sol.
and agglomerates in the sol solution. After sonification, the A boehmite sol, with a pH value of 3.32, was obtained. To solution was stirred for 24 h.
prepare the suspension of c-Al2O3 sol with CNTs-VxOy The binders applied to prepare the sol solution with the catalysts, 22 cc of boehmite sol was diluted with deionized catalyst were polyethylene glycol (PEG) and polyvinyl water and mixed with 0.04 g of CNTs-VxOy.
alcohol (PVA) with average molecular weights of 10,000 To prepare a sol using a binder mixture, 4 g of equal and 30,000–70,000, respectively.
wt% PVA and PEG was mixed with deionized water fol-lowing the procedure described in this section.
2.2.5 Preparation of AlOOH sol with CNTs-VxOy catalysts by addition of PVA/PEG prior to peptization 2.2.6 Preparation and pre-treatment of a-alumina support for coating the catalytic membrane Enough PVA binder to prepare a final solution with 2 wt%PVA was stirred with deionized water at 90 °C for 10 h.
Homemade alumina support pellets were prepared from Alumium tri-sec-butoxide was then added following the alumina powder with a particle size of less than 250 lm. 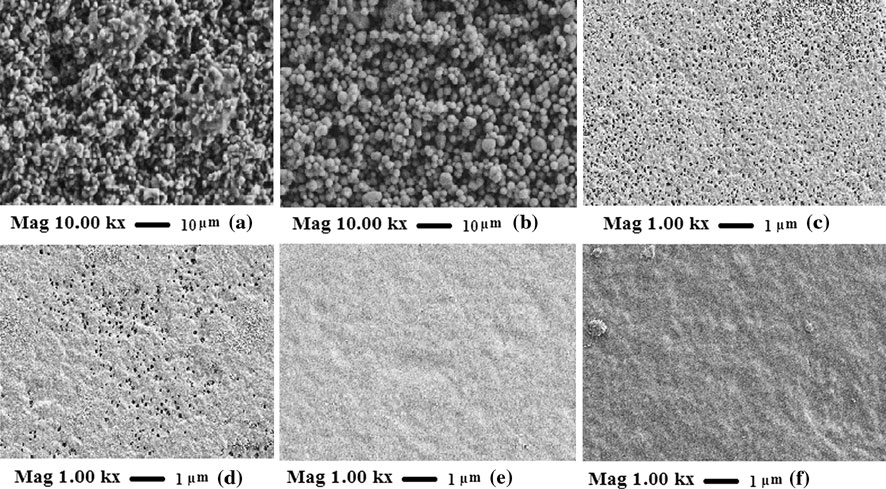 J Sol-Gel Sci Technol unbounded particle in an ultrasonic condition. As seen and isdefinable from the figures, it is clearly understood that thesurface treated with solvent under ultrasonic condition has farbetter and uniformed particles, it shows no unbounded parti-cles, as a result it proves the unique action of the solvent in anultrasonic treatment environment rather and comparing withthe untreated ones due to the removal of the unbounded par-ticles which is the result of the action of the solvent treatedwith homogeneous coated solution, now and therefore anexcellent adsorption site for the acidic solution was adopted,where for and on the supported surface without any treatmentno such result was observed. Figure c, d show the mem-branes coated with sol (AlOOH ? PVA) and (AlOOH ?PVA ? PEG), respectively, on the support surface withoutany treatment. In both samples, binder was added to the solprior to peptization. As shown in the SEM images, the coatingwas not homogenous and had many holes on the surface.
However, for the solvent-treated support, the solution coatingwas homogenous and smooth, as shown in Fig. e, f. Theresults show that the functional group introduced onto themembrane surface after solvent treatment provided excellentadsorption sites for the acidic sol.
Table shows the Zeta potential and mean particle size of the sol Al2O3 with and without binder under different pHconditions. Based on the results, the sol alumina withoutany binder was stable, but when PVA was added afterpeptization, the stability of the sol decreased, as shown bythe reduced Zeta potential of 15.2 mV. However, whenbinder was added to the sol prior to peptization, a morestable sol was obtained as a result of steric repulsion of thesol by the adsorbing polymers. Conversely, the higherpolymer contents contributed by the binder caused mem-brane defects related to shrinkage during the calcinationprocess required to produce an optimum membrane.
The specific surface area and pore volume of the catalyst and the unsupported membrane were analyzed usingnitrogen adsorption at -197°C. The physical characteris-tics of the raw MWCNTs, the acid-treated MWCNTs, theCNTs-VxOy, and three different types of unsupportedmembranes are listed in Table . Based on this analysis, weconcluded that the catalyst and all unsupported membraneshad meso-pores because the pores were larger than 2 nm.
The significant increase in the surface area of acid-treatedMWCNTs can be explained by the opening of pores by theMWCNTs, which makes the internal surface more acces-sible. However, after impregnation, the surface area of theprepared catalysts dropped drastically. This decrease insurface area and pore volume clearly indicates that theVxOy complexes were impregnated inside the MWCNTs.
Conversely, mixing the CNTs-VxOy with alumina sols prepared with different membrane support coating methods b–d adsorption isotherms of unsupported sample 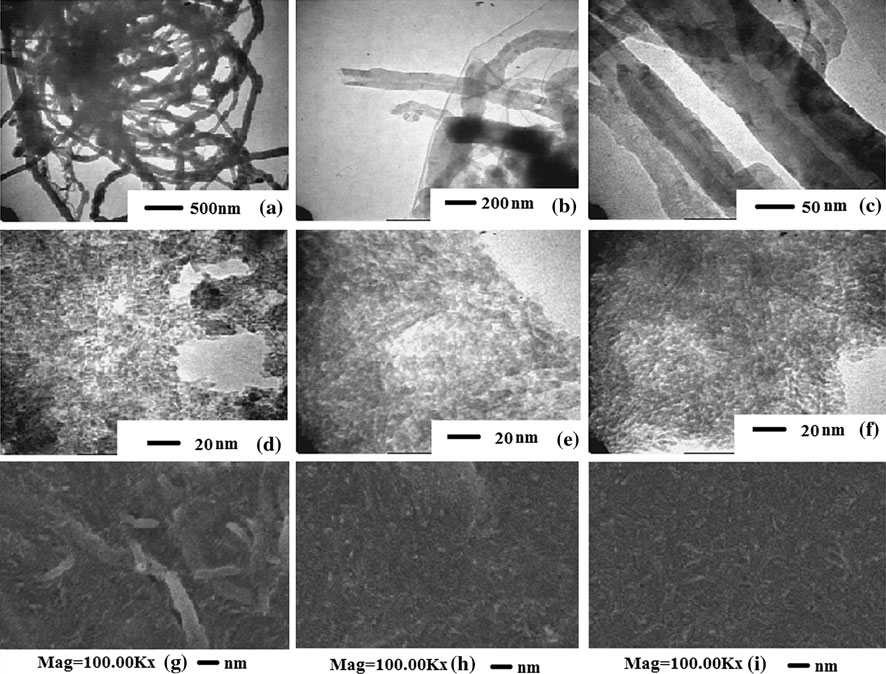 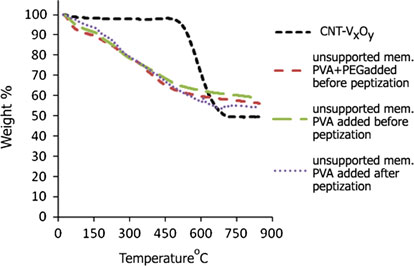 J Sol-Gel Sci Technol Fig. 4 SEM images of CNT-VxOy catalytic membrane TEM image membrane PVA ? PEG add to sol before peptization SEM images of of a MWCNTs, b acid-treated MWCNTs, c the CNTs-VxOy, g membrane, PVA add to sol after peptization h membrane, PVA add d unsupported membrane PVA add to sol after peptization, e unsup- to sol before peptization i membrane, PVA ? PEG add to sol before ported membrane PVA add to sol before peptization, f unsupported the PVA, PEG and boehmite particles occurred duringpeptization. The dispersion of binder inside the solprovided a homogenous surface area. However, whenPVA was added to the sol after peptization, particles couldnot disperse uniformly, increasing the porosity of themembrane.
As shown in Fig. the pore size distribution of the unsupported membrane prepared by adding PVA or PEG atdifferent times could be narrowly controlled. The mem-brane pore size distribution of the membrane prepared byadding PVA prior to peptization was narrower than that of Fig. 5 Weight loss curve for catalyst and unsupported membrane the membrane prepared by adding PVA to the sol afterpeptization. The pore size distribution of this membrane increased the specific surface area because Al2O3 possesses was narrow compared to that of the membrane prepared by a greater surface area and a more porous structure than adding the PVA and PEG mixture as a binder during VxOy. The addition of PVA and PEG prior to peptization peptization. The addition of binder molecules to the alu- resulted in a higher surface area for the unsupported mina sol prior to peptization resulted in a uniformly dis- membrane. Using a mixture of PVA and PEG as a binder tributed sol. Conversely, the addition of PEG increased the produced larger pore volumes than the use of PVA alone.
pore volume, pore diameter and BET surface area. As This result indicates that more hydrogen bonding among shown in the adsorption isotherms of Fig. d, monolayer

J Sol-Gel Sci Technol Fig. 6 XRD patterns ofunsupported membrane withdifferent condition ofpreparation formation was usually complete when the relative pressure the CNTs-VxOy catalyst inside the membrane was random.
reached 0.3 because the radius available for condensation However, the distribution of catalyst inside the membrane was decreased by the thickness of the monolayer or by prepared by adding PVA (Fig. or a mixture of PVA and approximately two molecular diameters. Based on the PEG (Fig. i) after peptization was much better than that results, the samples with relative pressures above 0.3 had inside the membrane prepared by adding PVA after pep- type IV hysteresis according to the IUPAC classification, indicating the presence of mesoporous materials related to The thermogravimetric weight loss curves for the CNT- cylindrical pores open at both ends ].
VxOy and unsupported membranes are shown in Fig. The TEM images (Fig. show that the acid-treated The thermal gravity curve in air for the CNT-VxOy catalyst MWCNTs had an open-ended structure and some defects shows that a major weight loss occurred at temperatures following acid treatment. The pentagonal defects and the greater than 500 °C, corresponding to the decomposition of curved dimensional area are important because they can the CNT template and indicating that 49 wt% was a result increase reactivity as a result of the tubes' structural of VxOy loading []. As shown, the higher weigh instability []. Figure c demonstrates that VxOy was ts associated with the residue were a result of the VxOy and successfully distributed on the surface and within the c-Al2O3 on the surface of the support.
CNTs. It can be noticed from the image that the VxOy For all the unsupported membranes, the initial losses of impregnated inside MWCNTs. The walls of MWCNTs are physically bound water and volatile materials were similar presented with randomly margins of dark and bright and occurred at temperatures below 150 °C. The weight regions. The bright margins represent CNTs, while dark losses at temperatures between 250 and 280 °C coincided margins (few nm) represent the vanadium oxide nanopar- with the evolution of H2O, CO2, and ethylene oxides, based ticles, which are intercalated between the CNTs layers.
on the decomposition of PVA or PEG, and weight losses at Figure d–f show the unsupported membranes prepared temperatures between 400 and 450 °C were due to the with different binders under different conditions. Figure d phase change of boehmite to c-Al2O3. This occurred at shows the membrane for which PVA was applied as a temperatures near 400 °C, and the losses of water were a binder after peptization of the Al2O3 sol. Figure f show result of reactions with the small amount of carbon residues the membranes for which PVA and a mixture of PVA and from the binder , PEG, respectively, were added to the sol Al2O3 prior to 2A1OOH ! c - A12O3 þ H2O: peptization. The distribution and homogeneity of particlesin the unsupported membrane prepared by adding PVA or a Figure shows the XRD patterns of the unsupported mixture of PVA and PEG to the sol Al2O3 prior to pepti- membrane prepared with the sol Al2O3 and different zation were much better than those of the membrane pre- binders in the presence of CNTs-VxOy. It was calcinated in pared by adding PVA after peptization. As shown in air at a heating rate of 3 °C/min and remained at 550 °C for Fig. large holes were present in the unsupported 3 h. The XRD patterns confirm that the composites were a membrane when PVA was added after peptization.
hybrid of c-Al2O3, VxOy and MWCNTs. The XRD results Scanning electronic microscope (SEM) images of the indicate that the mixed composition of the products CNTs-VxOy membrane supported on a-alumina are shown matched the patterns of different types of V2O5.H2O and in Fig. As shown in these figures, the orientation of 6VO2.5H2O. The peaks at 2h = 26.2° and 2h = 50.6° J Sol-Gel Sci Technol Table 4 The experimental data for the oxidation of styrene Amount of styrene of each experiment is 2 mol Amount of solvent 1,000 ml Table 5 ANOVA table for styrene oxidation Styrene conversion Benzaldehyde selectivity DF degree of freedom, CV coefficient of variation, std. Dev. standard deviation 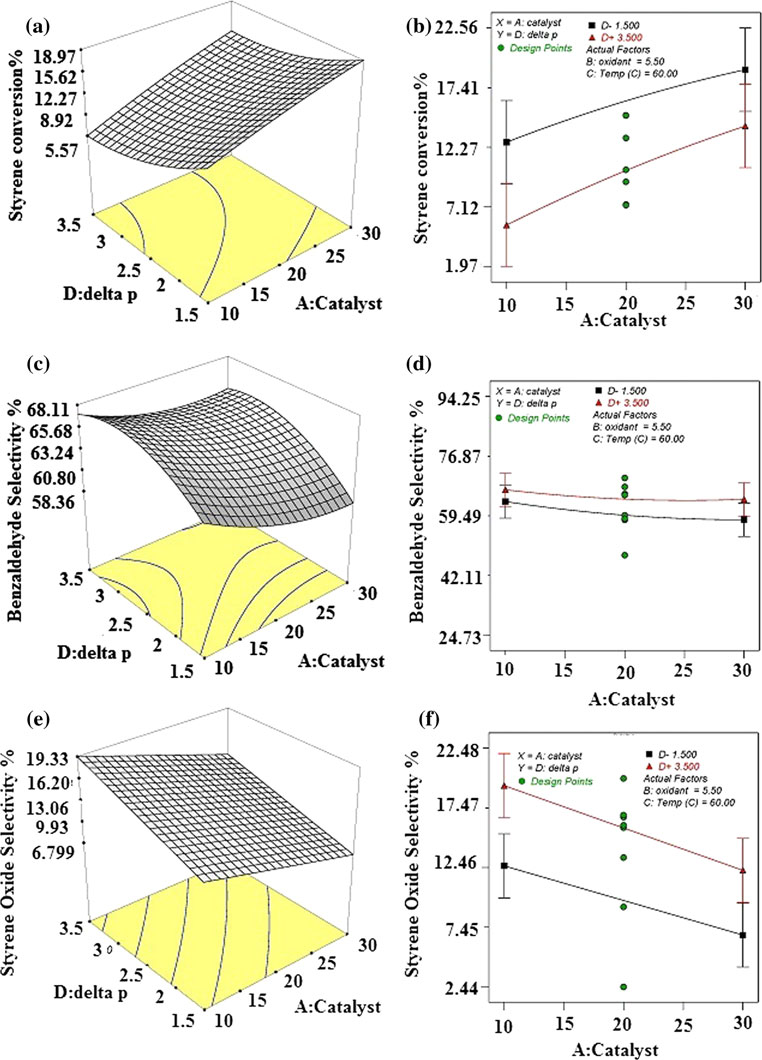 J Sol-Gel Sci Technol Fig. 7 Response surface plotshowing the effect of catalystpercentage and differentialpressure, and their mutual effecton the conversion of styrene(a, b) and on benzaldehydeselectivity (c, d) and styreneoxide selectivity (e, f) correspond to the (110) and (020) diffraction planes of presence of c-Al2O3, VxOy and MWCNTs in the composite V2O5, respectively [].
membranes and indicate that the choice of binder did not The peaks at 2h = 23.5 and 2h = 26.3° correspond to affect the membrane properties.
MWCNTs. The peaks overlap with the V2O5 peak (110),corresponding to the reflection peak (002) associated withthe inner layer spacing of nanotubes (d002 = 0.338 nm).
4 Model fitting and analysis of variance (ANOVA) Most peaks also had low intensities, indicating that theV2O5–MWCNTs nanocomposite had a microcrystal struc- The experimental data related to the oxidation of styrene to ture ]. The XRD patterns at 2h = 46.2° and 67° cor- benzaldehyde using supported membranes and an appli- respond to c-Al2O3 ]. For all the preparation methods, cation of PVA ? PEG prior to peptization are given in similar XRD patterns were found. These results confirm the Table The ANOVA results show that the reaction of