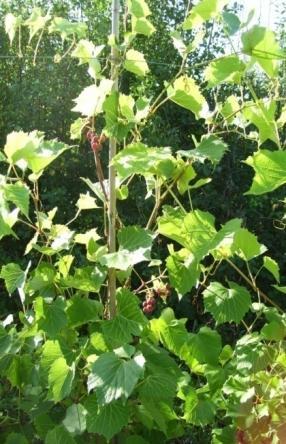 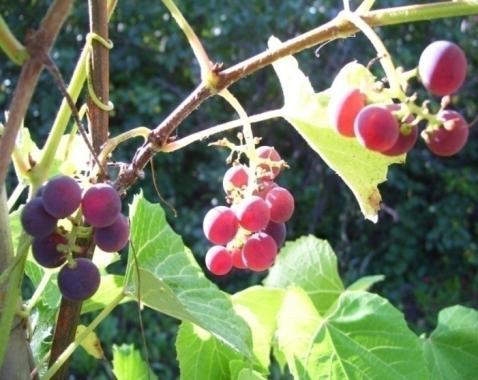 Grape Breeding for the
Prairies:
Inheritance of
Resveratrol production in hybrid
grapes
2008/09 Annual Project Summary for The Alberta Horticultural Growers Congress and Foundational Society By Tyler Kaban
University of Saskatchewan Breeding Overview
Over the last three seasons, I was able to perform multiple controlled crosses utilizing parent vines of diverse genetic backgrounds. Research started in my last year of undergraduate studies has continued employment with the Fruit Program and now as a graduate student. In 2007, with the help of summer staff, 300 vines from controlled crosses were planted in the U of S hort field plots. Of those vines two promising genotypes have Figure 1. Promising red-fruited (Valiant x Kay Gray) seedling showing greater hardiness (and quality traits), C-16 hardiness than its parent Valiant. Fruit which will be described in detail and a quality is similar to its paternal parent ‘Kay Gray'.
red-fruited (Valiant x Kay Gray) seedling Cluster size is small because the plants are very young. Currently, which produced fruit for the first time this there are no red grape varieties for the year. This genotype was the hardiest of all the first generation crosses to Valiant and proved to be hardier than Valiant itself having flowered above the snow Due to the low level of hardiness line following the 2008/2009 ‘test winter'. observed in the Valiant-cross, first This genotype may prove useful in generation seedlings, I decided to return further breeding. back to crosses with pure Vitis riparia to maintain greater hardiness in progeny. The first step was to select local V. riparias characteristics; many genotypes with 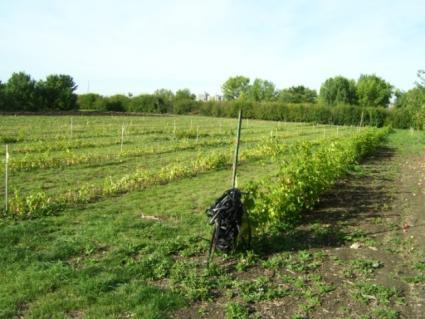 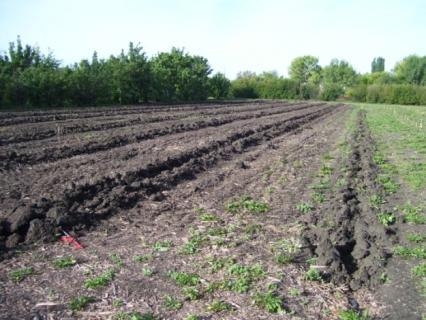 little to no ‘herbaceousness' (a common off type flavour in wild grapes) were selected, cloned and used in controlled crosses. I have also utilized superior male V. riparias in breeding; the pollen parent of C-16 is a male Manitoba V. riparia that I found growing in an above-ground planter outside the university library, I reasoned that if it could survive -45°C with its roots above ground it must be very hardy! Instead of using inferior ‘quality' parents like Concord or Fredonia-types, I decided on the best, low acid and neutral flavoured Swenson and French hybrids available, preferably those that already have some V. riparia in their backgrounds. I have also used pure Vitis vinifera (Pinot Noir, Merlot, Riesling, Cabernet) in some crosses and those will remain in pots in the greenhouse for future breeding. Not all crosses have been directed to wine grapes, I am also looking at producing hardy juice and table grapes; I have bred a promising seedless (Valiant x Figure 2. Block 4 grape seedling nursery Petite Jewel) seedling that will be used planted in 2008 & 2009 (Top); newly in further table grape breeding. broken soil in. Block 4 ready for 2010's seedlings (Bottom). In 2008, 3,000 experimental grape vines were planted in Block 4 of the hort field plots and this year (2009) another 4,000 were added. Next year, I hope to plant Details on some exciting
another 3,000 vines, this time with selections
promising second-generation material based on ‘C-16', a promising female vine. I have crossed C-16 with some of I was able to identify the superior grape the best interspecific grape hybrids seedling – accession ‘C-16' which arose from a cross I performed between Vitis ‘Severnji' and a Vitis riparia male pollen Minnesota's grape breeding program in parent. This breeding was done as part of my undergraduate thesis project (also hardiness with high fruit quality. It is in funded by the Alberta Hort Congress) second generation crosses like these and is a continuation of the effort to that segregating populations begin to breed high quality grapes for the throw out the ‘good stuff'. I look forward Canadian Prairies. to evaluating these promising crosses in the future. 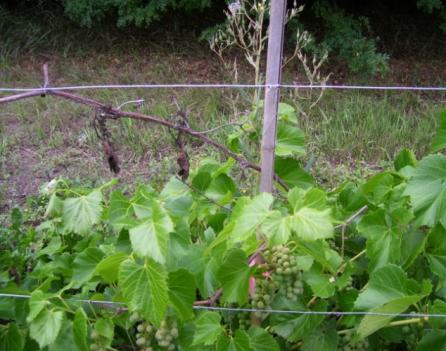 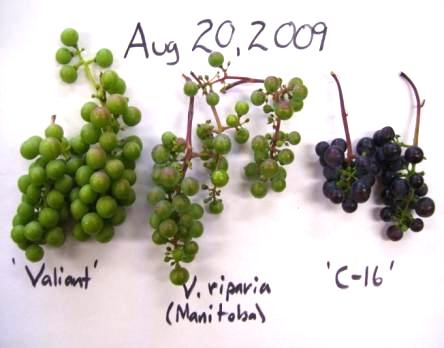 ‘C-16' has proven to be a superior Vitis riparia x F1 in that it not only possesses excellent fruit quality characteristics Accession C-16 flowered for the second herbaceousness), moderate acidity and season this year (2009) and despite the high sugar (average 23° brix in 2008 & 2009) but the vine itself has many summer, ripened ahead of both ‘Valiant' desirable agronomic characteristics. C- and Manitoba V. riparia. Figure 4 illustrates just how early-ripening this Saskatoon, Saskatchewan through three genotype is. In a ‘normal' year with winters including last winter which was adequate heat unit accumulation, C-16 may be capable of full ripeness by the Saskatoon experienced 24 consecutive last week of August; this year it was days where temperatures were no estimated to be 2 weeks earlier than ‘warmer' than -25°C! The majority of Valiant. It was also observed that the this cold-snap, saw temps in the -30's fruit of C-16 ripens evenly from top to with an absolute minimum of -42°C. bottom (within and between clusters) This past ‘test' winter was a welcome achieving uniform ripeness throughout. event in that it enabled the identification Valiant by comparison began to ripen its the truly hardy grape genotypes in the bottom clusters first where heat had field plots. Aside from pure indigenous accumulated near the bare soil. Vitis riparia, genotype C-16 was the only seedling to suffer little to no die-back and flowered from the highest buds on canes trained up a 7' stake. For comparison, the standard Prairie-hardy genotype ‘Valiant' died back to the snow line under this period of extended cold, evidently lacking true ‘field' hardiness. Figure 4. Vitis genotype ‘C-16' fruit ripening in comparison with hardy standards ‘Valiant' and Manitoba V. riparia. Note: C-16 has larger clusters on mature vines (Figure 7). Figure 3. Vitis ‘Valiant' with dead canes above the snow. Vine is trained on a 7' bamboo stake shown centre, picture taken Aug. 20, 2009. 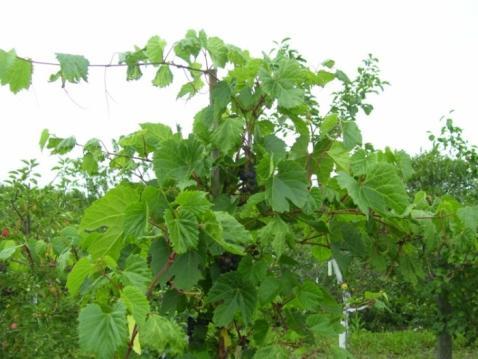 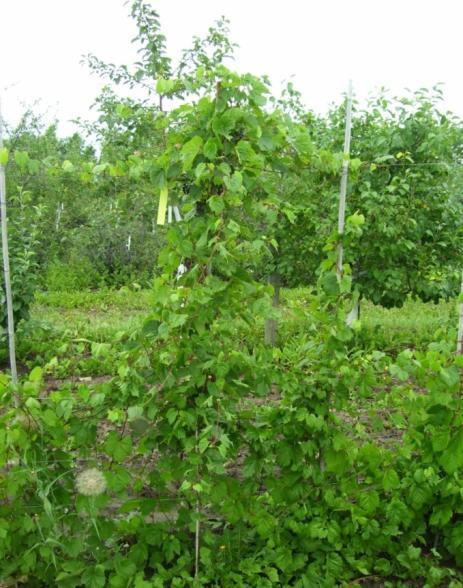 Figure 5. C-16 with ripe fruit at the top canes. Figure 6. C-16 with even ripening fruit from top to bottom (Aug. 20, 2009); hardy well above the snow line as well. Figure 7. Unripe bunch of Vitis ‘Frontenac' on top comparable to ripe ‘C-16' (bottom) on greenhouse-grown vines. To get large clusters like these in the field, vines must be fully mature and trained properly. Pictures taken on the same day- Sept. 20, 2009. ‘Frontenac', the vines to ripen its canes and drops its leaves; last year (2008) being fully Minnesota is aprox. 25% Vitis vinifera, defoliated and dormant by Oct. 10 while 3% V. labrusca, 50% V. riparia with Valiant still possessed green leaves and lesser amounts of other Vitis spp. like V. rupestris, V. aestivalis, V. berlandieri and V. cinerea. This type of genetic Planned research for 2009/2010
background maximizes the adapted alleles from the North American species The purpose of my graduate research (especially Vitis riparia) which provides project is in part to determine if C-16 is a hardiness and disease resistance and superior breeding parent (combining minimizes the negative influence of V. abilities) compared to other standard labrusca on flavour quality. ‘Frontenac' Vitis riparia x F1's like Valiant, Beta, ES is said to possess ‘Vinifera-like' flavour 8-2-24 and Frontenac. I will also look at quality with only a theoretical quarter of some of the heritabilities of fruit quality its genome comprised of Vitis vinifera traits like pH, sugar content (°Brix), acidity (TA) and the ‘functional' trait, Likewise, accession ‘C-16' is comprised of aprox. 25% Vitis vinifera, and 50% V. compound will give prairie grapes a riparia but contains no Vitis labrusca in commercial advantage filling a valuable its background, therefore has no potential to carry off-flavours associated with this species. The rest of C-16's Resveratrol is an ‘inducible' trait that pedigree is filled by V. amurensis needs some sort of stimulus to elicit its another super hardy grape species from production in grape skins. The chosen Asia. In fact it may be favourable, elicitor for this project is UV-C radiation. This past winter with the help of your organization's from both Vitis riparia and Vitis amurensis that makes C-16 better departmental grant, two 60watt UV-C adapted to the mid to high latitudes of lamps were purchased for this purpose the Canadian Prairies than the most and assembled in a proper work station Northern Vitis riparia ecotypes. In addition, C-16 has ‘Precose de Malingre' Analytical (HPLC) equipment was also in its background which is a super-early purchased so that the resveratrol ripening V. vinifera, this vine is also the content of harvested fruit can be ancestor of the most notably early- analyzed in the second phase of my Angevine, Sigerrebe, Ortega, Perle de Csaba and Agria. The ability to ripen earlier than Valiant and Manitoba V. riparia makes C-16, a potentially valuable Canadian Prairies. In Saskatoon over the last three growing seasons it has been observed that C-16 not only ripens its fruit first but its also one of the first Labrusca= 1%
Riparia= 50%
Figure 7. Genetic background of (C-16 x Frontenac Gris) progeny; maintaining a similar Figure 8. Ultraviolet lamps used in resveratrol pedigree to Frontenac. induction experiments Summary of Grape crosses:
2007: 14 types of crosses using Cultivar Development
the following parents: The experimental design of my thesis project utilizes a half-diallel mating scheme. This past winter I was able to complete all the crosses with an excess amount of seed resulting from the C-16 x Frontenac Gris cross (extra seedlings will be planted directly in the field plots next spring). As mentioned earlier, both parents have desirable traits and I believe that their offspring could be a good step toward cultivar development. Somerset Seedless Frontenac Gris is a grey mutation (sport) of Frontenac so it actually breeds like a V. riparia white grape meaning that its offspring will carry recessive alleles for white fruit colour. I am optimistic that the above cross could produce an even hardier 2008: 8 types of crosses using the following parents: characteristics as the early ripening trait of C-16 could help in producing progeny of much lower fruit acidity and like flavoured. In the next year this breeding strategy and hypothesis will be tested. Himrod Louise Swenson Sabrevois Selfed Eona Selfed Valiant V. riparia 2009:31 types of crosses using the following parents: (Riparia K x Pinot Noir) DG Riparia DM 8521-1 New York Muscat ES 10-18-28 ES 2-8-1 The parents used in the breeding ES 8-2-24 program represent a wide range of ES 8-2-43 hardy and semi- hardy varieties useful for wine, juice and table grapes. Some crosses may result Kandiyohi in hardy offspring but others will Louise Swenson likely require another generation or Petite Jewel 2 before hardiness for Prairie Riparia A conditions can be restored. Riparia I Riparia J Previous to this project, grapes have not been bred at the Riparia K Riparia L Thus, these crosses represent the Selfed ES 8-2-24 start of an entirely new breeding St. Croix Steuben Valiant I wish to thank the The Alberta Horticultural Growers Congress and Foundational Society and the Planned for 2010: 21 types of U of SK's Department of Plant crosses using the following providing 45% of funding for my stipend and research expenses. Also, ‘Garden's Alive' (a US company from Ohio) is providing 10% of the funding. (C-16 x ES 8-2-24) (C-16 x Frontenac Gris) I am planning to graduate in Fall or Winter of 2010, at which time I will send a completed copy of my