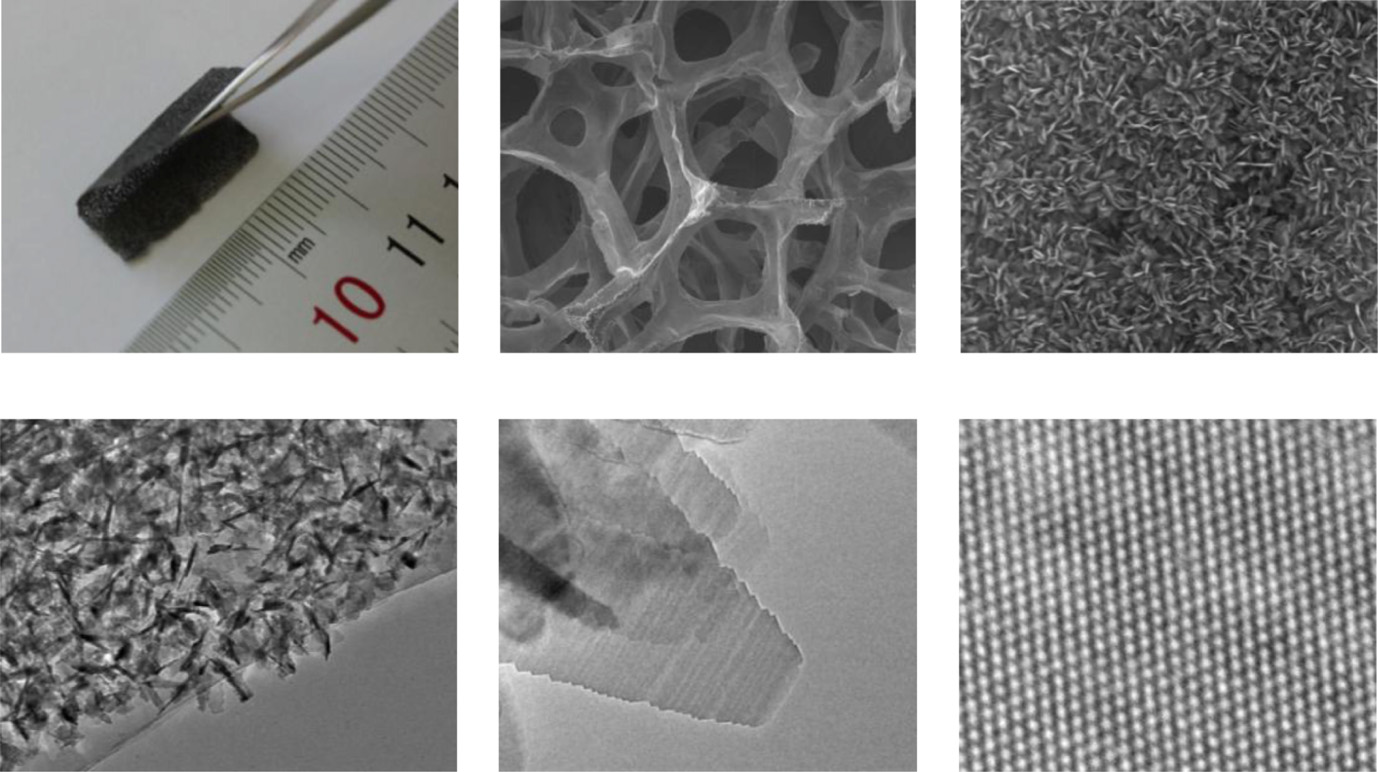 Schematic of a ﬂexible battery containing a cathode and an anode made from 3D interconnected GF.
performance. To build a ﬂexible LIB with a high capacity and perpendicular to the surface of the GF, which not only provides fast charge and discharge rates, we integrated highly conductive, a large interfacial area for fast lithium insertion/extraction but porous, and ﬂexible GF with LTO and LFP as anode and cath- also ensures a short solid-state diffusion length (Fig. 2 C and D ode, respectively (Fig. 1). It is worth noting that the 3D porous and The LTO sheet growth is nucleated at GF network was directly used as a highly conductive pathway for wrinkles on the GF because of their higher chemical reactivity electrons/lithium ions and current collectors for the LIB, without ). The direct growth of LTO on the GF enables the use of conventional metal current collectors, carbon black good contact and strong binding between LTO and GF, with no additive and binder. The LTO/GF and LFP/GF hybrid materials need to add any binder. As a result, no LTO nanosheets were were fabricated by in situ hydrothermal deposition of active peeled off even after repeated bending ( materials on GF followed by heating in an argon atmosphere The transmission electron microscope (TEM) image (Fig. 2E) (details in Methods and ). Notably, similar to GF, shows that the LTO nanosheets are several hundred nanometers these hybrid materials are very ﬂexible (Fig. 2A), can be bent into in width and a few nanometers in thickness. The high-resolution arbitrary shapes without breaking, and completely preserve the TEM image in Fig. 2F indicates the high crystallinity of the 3D interconnected network structure of the GF (Fig. 2B).
nanosheets with a lattice fringe spacing of 4.8 Å, corresponding The LTO in the hybrid material has a sheet structure a few to the most stable and frequently observed (111) facet of spinel nanometers in thickness, and high-density LTO sheets stand LTO (), which is consistent with the X-ray Characterization of a free-standing ﬂexible LTO/GF. (A) Photograph of a free-standing ﬂexible LTO/GF being bent (2 × 2 cm2). (B and C) SEM images of the LTO/GF. (D) TEM image of the LTO/GF. (E) TEM image of the LTO nanosheets in LTO/GF. (F) High-resolution TEM image of a LTO nanosheet showing latticefringes with a spacing of 0.48 nm.
PNAS October 23, 2012 vol. 109 no. 43 17361

electrons, a short ion diffusion length, and a fast transport channel for a high Li+ ﬂux, which provide the electrodes with a great po- tential for fast charge and discharge.
Electrochemical Behavior of the LTO/GF Anode. We investigated thelithium insertion/extraction properties of the LTO/GF material by galvanostatic charge–discharge measurements (Fig. 3) and Li4Ti5O12 and Li7Ti5O12
found that this LTO/GF hybrid material shows extremely high charge/discharge rates. At a charge/discharge rate of 0.1 C, the LTO/GF and LTO have similar speciﬁc charge/dischargecapacities. However, at charge/discharge rates of 1 C and 30 C, the LTO/GF shows a speciﬁc capacity of about 170 and 160 mAh/g, respectively, and even at a charge and discharge rate of 200 C (corresponding to an 18-s full discharge), it still retains ﬁc capacity of 135 mAh/g, corresponding to ∼80% of the speciﬁc capacity at the 1-C rate. In contrast, the reference LTO, which was prepared using the same process but without the presence of GF, shows a capacity of almost zero at 200 C, al-though it also has a 2D sheet structure ().
Moreover, the rate performance of this LTO/GF material is much better than those reported in the literature for all kinds of conventional LTO electrodes integrated with metal foil current collectors, carbon black additive and binder, including nano- crystalline LTO, carbon-coated LTO, and LTO/multiwalled car- bon nanotube and LTO/graphene composites ( To further determine the stability of the electrode structure, we studied the change in morphology of the LTO/GF electrode after 100 charge/discharge cycles at 0.5 C and found that the LTO/ GF electrode is capable of long-term lithiation and delithiation at low rates without structural failure ).
More strikingly, the discharge curve of the LTO/GF anode at high rates (up to 200 C) shows a long, ﬂat potential plateau, which ensures a constant power output, and therefore is very important for the commercial use of LIBs (20). The ﬂat plateausegment is a characteristic of two-phase equilibrium (21), a room-temperature miscibility gap, as shown in Fig. 3A. In con- trast, although many nanostructured materials have been devel- oped to show high-rate performance (4, 5, 22–24), most of them exhibit a nonﬂat plateau with a capacitor-like charge–discharge curve at high rates. The proﬁle change of voltage curves from ﬂatto slope at high rates may be attributed to polarization related to the poor electrical conductivity of electrode materials, or may occur because electrode materials obey a pseudocapacitive (in- terfacial) storage mechanism instead of a bulk intercalation storage mechanism (25). The high-rate performance with a long, ﬂat plateau in the potential proﬁle of the LTO/GF electrode suggests excellent ion and electron transport kinetics of the LTO/GF hybrid structure. As shown in Fig. 3C, the speciﬁc ca- pacity of the ﬂat plateau segment of the LTO/GF at 200 C is 86 Discharge rate and cyclic performance of the LTO/GF electrode. (A) mAh/g, whereas the value of the reference LTO is almost zero.
Two-phase equilibrium region of the LTO/GF with different charge/discharge Fig. 3D shows the cyclic stability of the LTO/GF at 30 C and 100 rates; C /n denotes the rate at which a full charge or discharge takes n hours.
C. Note that the capacity decreases less than 4% of the initial (B) Discharging voltage curves of the LTO/GF with different charge/discharge value after 500 cycles, demonstrating the excellent electro- rates. (C) Speciﬁc capacities of the LTO/GF and reference LTO at various chemical stability of this free-standing ﬂexible electrode.
charge/discharge rates within a ﬂat plateau segment shown in B. (D) In general, in a commercial LIB, metal current collectors Capacities of the LTO/GF charged/discharged at constant 30-C and 100-C (mainly copper, ∼10 mg/cm2 and aluminum, ∼5 mg/cm2, with rates for 500 cycles.
a thickness of ∼10–30 μm), conducting additives, and bindingagents are indispensable, and these account for 30–50% of the diffraction measurements (JCPDS 49–0207; electrode weight. Bulk electrodes constructed of either metal (5, In addition, similar to the pristine GF (19), the Raman 14) or pyrolytic carbon (26) have recently been developed forfast charge and discharge, but metal current collectors are still spectra of a free-standing LTO/GF material shows a strongly needed for facilitating electron transport from the electrode to suppressed defect-related D band (), in- the cell. These metal and carbonaceous components of bulk dicating the overall high quality of graphene in LTO/GF. This electrodes make a battery cell heavy and nonﬂexible. In contrast, also suggests that no defects were introduced in GF during the in our electrode, the 3D ﬂexible and conductive interconnected LTO synthesis process, guaranteeing a very high electrical con- GF network acts not only as a highly conductive pathway for ductivity of the GF. The above features of this 3D porous LTO/ electrons/lithium ions but also as an ultralight current collector GF hybrid electrode produce a highly conductive pathway for (down to ∼0.1 mg/cm2) (without