Journal of Physiology - Paris 99 (2006) 232–244 Development and virtual screening of target libraries Bioinformatics of the Drug, CNRS, UMR 7175, 74 route du Rhin, F-67400 Illkirch, France The concomitant development of in silico screening technologies and of three-dimensional information on therapeutically relevant macromolecular targets makes it possible to navigate in the structural proteome and to identify targets fulﬁlling user-deﬁned queries.
This review illustrates some in-house recent advances in the development of target libraries and how they can be browsed to unravelchemogenomic information.
 2005 Elsevier Ltd. All rights reserved.
Keywords: Virtual screening; Docking; Chemogenomics gets and whenever possible relevant ligand binding sites,(2) predict the most likely target(s) of a given ligand, (3) Virtual screening of compound libraries ( predict a selectivity proﬁle for either a target or a ligand, ) has recently gained considerable importance in early (4) predict the ‘druggability' of a given target from a struc- hit ﬁnding programs, notably when technological or eco- tural point of view. All these issues require early answers in nomic hurdles disfavor experimental screening. Numerous the evaluation of drug discovery programs. We will try to successful applications of either ligand-based review each of these applications in the coming sections.
) or structure-based () in silicoscreening have been reported in the literature. Quite unex- 2. Setting up target libraries pectedly, the inverse paradigm still has not been deeplyinvestigated. Given a set of ligands, is it possible to prior- When developing a target library, a ﬁrst compromise itize their most likely targets for experimental validation? between available information (notably at the structural Answering this question ﬁrst requires the development of level) and the therapeutical relevance of selected targets a library covering the most reliable target space ( has to be made. Many proteins for which ﬁne structural By target library, we mean here a col- details are known (e.g. toxins, antibodies) are not ‘drugga- lection of macromolecules for which either the amino acid ble'. Conversely, some important protein families for the sequence and/or three-dimensional (3-D) coordinates are pharmaceutical industry (e.g. G-protein-coupled receptors) available and can be browsed using simple queries. Then, are poorly understood at the 3-D level. Next, a scope has to an appropriate screening method has to be set up which be assigned to the library. Which target space has to be cov- is able to select a panel of targets fulﬁlling requirements ered? Last, which kind of data (amino acid sequences, 3-D imposed by either a ligand structure or a speciﬁc ﬁngerprint atomic coordinates) is browsed for deﬁning a target list? ) or an evolutionary trace 2.1. sc-PDB: a collection of active sites from the Protein Once a target library has been developed, sev- eral applications can be foreseen: (1) simply compare tar- 2.1.1. Setting up the database To establish the proof-of-concept that a protein library Fax: +33 3 90 24 42 35.
E-mail address: might be of screening interest, we have chosen the Protein 0928-4257/$ - see front matter  2005 Elsevier Ltd. All rights reserved.
doi:10.1016/j.jphysparis.2005.12.084

D. Rognan / Journal of Physiology - Paris 99 (2006) 232–244 Fig. 1. Flowchart for developing the sc-PDB databank ).
Data Bank (PDB) ) as it is the major tein active sites customized to accommodate small molecu- 3-D protein database for which experimentally determined lar-weight ‘drug-like' ligands. Generally, no diﬀerences protein coordinates are available. Several protein–ligand between solvent, detergent, co-factors and ligands (in the databases derived from the PDB have been recently pharmaceutical sense) are made in the above-mentioned databases. To ﬁll this gap, we recently developed a rela- tional database (sc-PDB) (speciﬁcally customized for screening purposes ().
easily allows retrieving protein–ligand com- Starting from 27,000 PDB entries, a series of hierarchi- plexes from a user-deﬁned query focusing on speciﬁc cal ﬁlters has been applied to constitute the database as molecular interactions. MSDsite () is a database search and retrieval system for listing PDBentries fulﬁlling user-deﬁned queries based on ligand • removal of undesirable entries: low resolution (>2.5 A information. The LPDB ) stores 195 X-ray structures, NMR structures; high-resolution protein–ligand complexes and related • on-the ﬂy detection of the molecule to which each refer- physicochemical descriptors as well as binding constants.
enced PDB atom belongs to (target, organic ligand, pep- Its main purpose, as well as related protein–ligand data- tide ligand, co-factor, ion, solvent, detergent) thanks to sets ) is to pro- knowledge-based rules and preexisting lists of ‘HET' vide reliable 3-D information for calibrating docking codes deﬁned in the PDBsum database algorithms and scoring functions. The ProLINT database (contains about 20,000 interaction • removal of undesirable small molecular-weight ligands data for two protein families (kinases, proteases) with (solvent, detergents, ions and co-factors exhibiting atom attached information about the ligand, the protein, exper- types not recognized by classical docking algorithms); imental binding constants and published literature. It has • deﬁnition of putative ligands (organic or peptidic mole- been used to derive structure–activity relationships and cules, co-factor if present alone); predict binding constants. LigBase ) • deﬁnition of the binding site for each ligand (collection is a database of ligand binding sites aligned with related of amino acids for which any heavy atom is closer than protein structures and sequences containing 50,000 bind- ˚ from any ligand atom); ing sites for heterogeneous ligands (ions, solvent, co-fac- • prioritization of a single ligand/active site for each PDB tors, inhibitors, etc.).
entry by calculating the buried surface area of the ligand However, none of the above-mentioned databases are and of the site, and selecting the ligand/site pair for directly usable to generate a collection of ‘druggable' pro- which the percentage of burial is the highest; 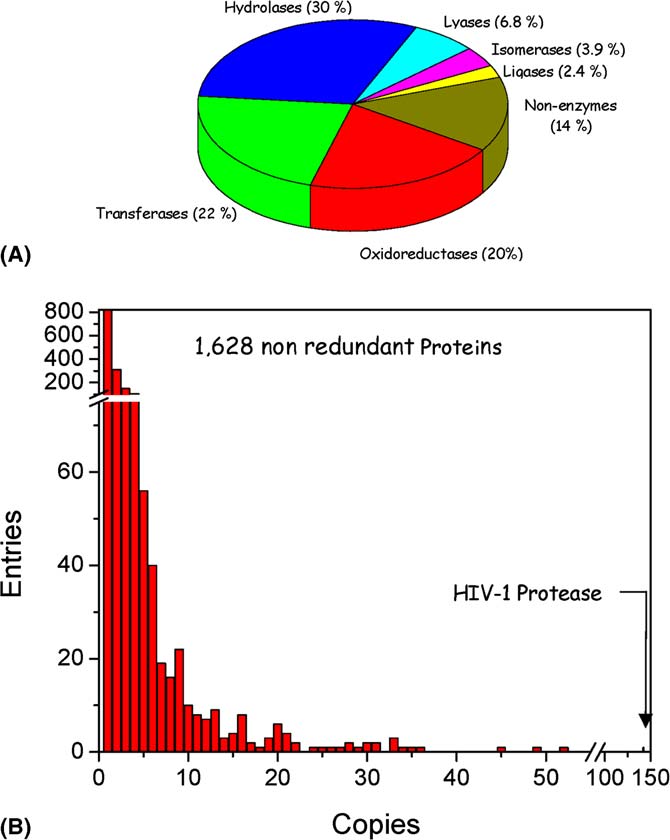 D. Rognan / Journal of Physiology - Paris 99 (2006) 232–244 • storage, for each selected PDB entry, of 3-D atomic great interest for application like virtual screening. Indeed, coordinates in readable PDB format (target, active site) conformational diﬀerences between several copies of an and SD/MOL2 formats (ligand, co-factors, ions).
active site reﬂect the local protein ﬂexibility.
2.2. hGPCRDb: a collection of human non-olfactory 2.1.2. Annotating the database The current version of the sc-PDB database contains 5947 ligand-binding sites for 2626 small molecules; In total, 2.2.1. Setting up the database the database refers to 5947 PDB entries. We assigned a G Protein-Coupled Receptors (GPCRs) constitute a unique UniProt (accession number superfamily of membrane receptors of outmost importance to each protein, thereby identifying 1628 diﬀerent proteins in pharmaceutical research ().
in the database. Additional information collected from Hence, GPCRs are the macromolecular targets of ca.
both UniProt and PDB databanks was collected to obtain 30% of marketed drugs (). The ﬁrst draft the source organism and the biological function of each of the human genome suggests that over 800 genes encode protein. A functional classiﬁcation of the database entries for a GPCR out of which only a few is shown in Entries were separated into two super- (ca. 30) are currently addressed by marketed drugs. If families, namely enzymatic and non-enzymatic proteins.
one excludes the family of sensory receptors, about 400 Out of the 5947 diﬀerent entries of the database, ca. 85% GPCRs are potentially ‘druggable' with ca. 120 proteins are enzymes with a well-referenced EC (Enzyme Commis- being still considered as orphan targets ( sion) number The distribution of enzyme Traditionally, the ﬁrst stage in the design of GPCR families displayed in reveals that the most populated ligands has focused on the potency of the ligands for the family is that of hydrolases (35% of the enzymes). This is selected receptor target. Selectivity towards the host recep- correlated to the high number of proteases in the sc-PDB tor is usually considered once potency has already been database. B gives an overview of the redundancy of reached. It would however be highly desirable to consider current database entries. In most cases, less than 10 copies selectivity as soon as possible in the design process. Ideally, of an active site corresponding to a given protein are avail- one would like to consider the GPCR universe for design- able in the database. The uneven protein entries distribu- ing a ligand with the desired selectivity proﬁle. As address- tion, which reﬂects the intrinsic PDB redundancy, is of ing this issue by high-throughput screening is currentlyimpossible, ‘in silico' screening could provide a reasonablestart. Indeed the recently described 2.8 A ˚ -resolution X-ray structure of bovine rhodopsin pro-vides a possible 3-D template for modeling other GPCRs.
Recent reports unambiguously demonstrated that rhodop-sin-based GPCR homology models are accurate enough topropose reliable 3-D models of receptors very diﬀerentfrom bovine rhodopsin ) and to identify new ligands by structure-basedvirtual screening ). Ofcourse, using classical homology modeling to establish a3-D target library including ca. 400 reliable 3-D models isnot possible. We therefore designed a chemoinformatictool (GPCRMod) speciﬁcally dedicated to high-through-put GPCR modeling (). From the verybeginning, several considerations were taken in the designof the code: (i) the target library should cover all humannon-olfactory GPCRs, (ii) a reliable multiple alignmentof all investigated GPCRs should be obtained at theseven-transmembrane (7-TM) domain only, acknowledg-ing that high-throughput modeling of intra- and extra-cel-lular loops is not feasible, (iii) the 7-TM binding cavity ofevery 3-D model should not be biased by the X-ray struc-ture of bovine rhodopsin.
In a ﬁrst step, 372 human GPCR amino acid sequences were aligned at the 7-TM by browsing the target sequence Fig. 2. sc-PDB content (release 3, March 2005): (A) distribution of for family-speciﬁc ﬁngerprints and motifs ( enzymes and non-enzymes; (B) observed redundancy.
Then, alignments were converted into 3-D 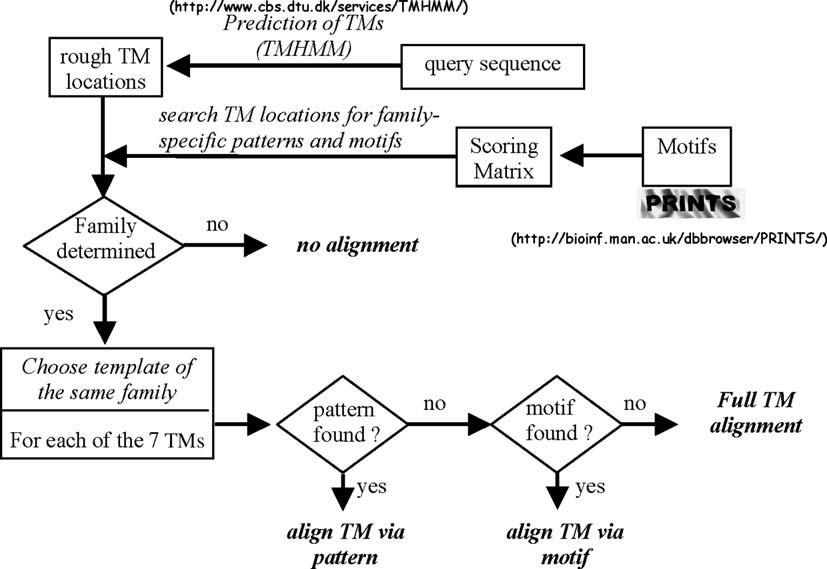 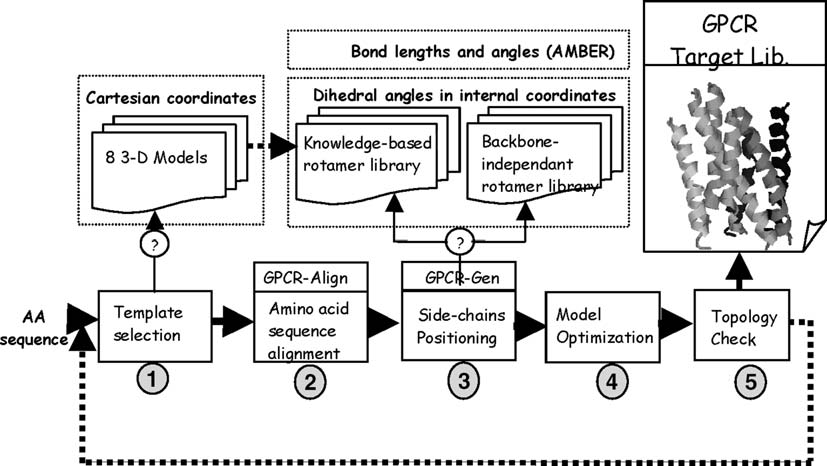 D. Rognan / Journal of Physiology - Paris 99 (2006) 232–244 Fig. 3. Multiple alignment ﬂowchart in GPCRMod.
model using a comparative modeling tool that uses a set of nal binding site in bovine rhodopsin, were extracted from ligand-biased GPCR models as main chain templates, and all entries and concatenated into ungapped sequences out two rotamer libraries for side chain positioning (). A of which a phylogenetic tree could be derived using the key point of the modeling procedure is that 7-TM cavities standard UPGMA clustering method ( are modeled starting from templates which prove useful to discriminate known ligands from decoys. Resulting 3-D Twenty two clusters could be unambiguously detected models are qualitatively quite similar to those obtained from the present analysis of 30 amino acid positions by ligand-assisted comparative modeling These clusters were deﬁned in order to encompass ) but obtained at through- the maximum number of related entries within a branch put allowing the fast generation of hundreds of targets.
characterized by the highest possible statistical bootstrapvalue. Thirty four out of 372 entries could not be assigned 2.2.2. Annotation of the hGPCRdb to one of the existing 22 clusters and are deﬁned as single- Assuming that similar targets recognize similar ligands, tons. The herein presented tree is very similar to the most an accurate annotation of all entries should consider simi- complete phylogenetic tree (GRAFS classiﬁcation) known larities/diﬀerences at their binding cavity. As most small to date although the latter has molecular-weight ligands probably bind to the 7-TM core, been obtained from full TM sequences. In both classiﬁca- all GPCR entries have been annotated using a chemoge- tions, GPCRs of the Frizzled, Glutamate, Secretin and nomic procedure considering a ﬁngerprint characterizing Adhesion families cluster in well-separated groups whereas their 7-TM binding cavity. Thirty positions lining the reti- the large Rhodopsin family can be classiﬁed into 18 Fig. 4. 3-D model generation ﬂowchart in GPCRMod. 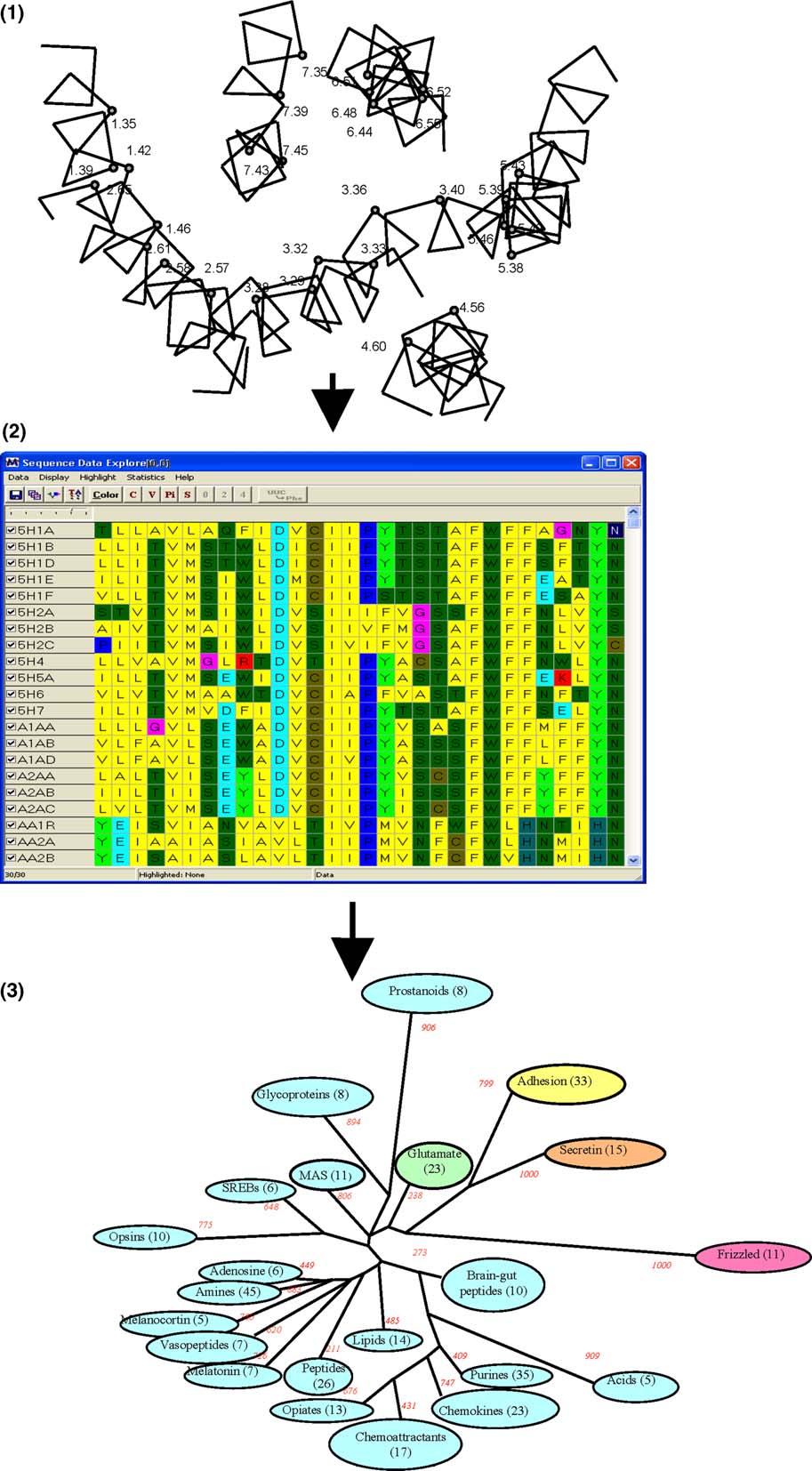 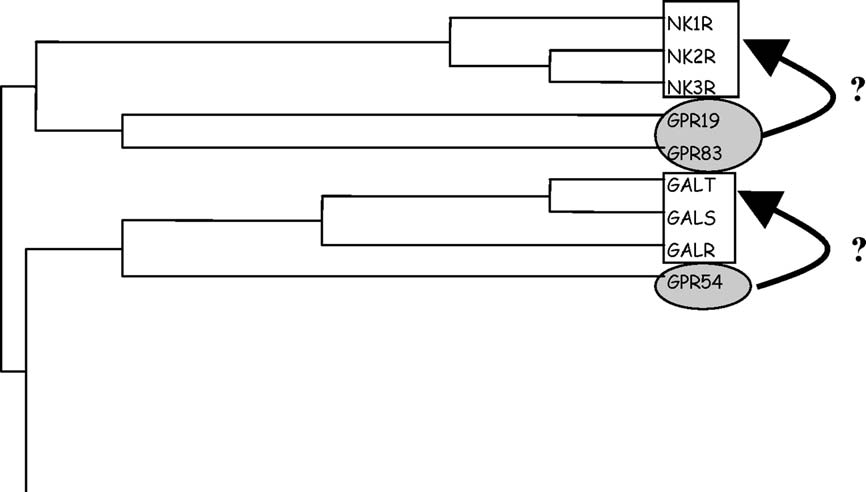 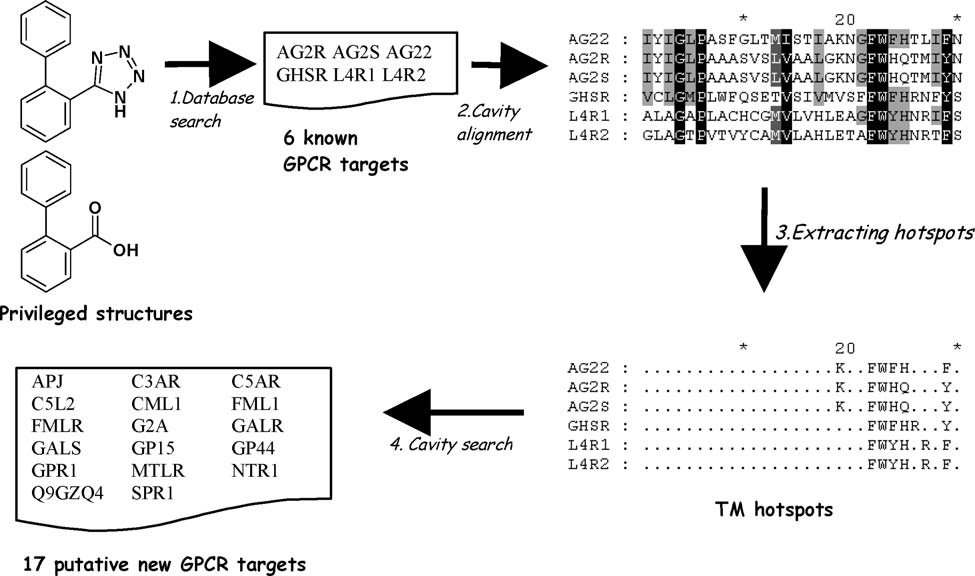