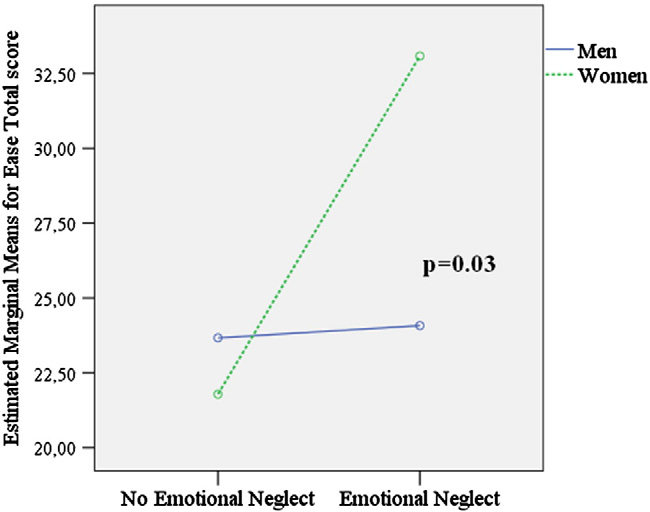 E. Haug et al. / Comprehensive Psychiatry 56 (2015) 35–41 4.2. Strengths and limitations of the study We included patients in the early phase of the treated course of the disorder, thereby minimizing potential confoundingeffects such as selection of non-responders and chronicity thatmight impact on the assessment of ASEs and CT. TheNorwegian mental health care offers public mental health careto all individuals with mental illness within a given catchmentarea. Because of the absence of private mental health care inNorway, the sample is not biased for socioeconomic class. Thestudy population is representative because we included allconsecutive in- or outpatients referred to treatment for apsychotic disorder in two neighboring Norwegian counties in adefined time period.
4.2.2. Limitations Fig. 1. Interaction between gender and emotional neglect on EASE total The correlational nature of this study gives no firm score.ANOVA, interaction between gender and emotional neglect: Df = 1,f = 4.91, p = 0.03.
conclusions about the direction of associations, or about "No emotional neglect," n = 29; "emotional neglect," n = 25; men, n = 28; women, n = 26.
causality. CT ratings are made from retrospective self-reports, and childhood adversities might be both conse-quences and triggers of distorted self-experiences. Highlevels of ASEs and high levels of CT reported could also be a associated with hippocampal and striatal alterations in adults result of recall bias among patients with high levels of . Sex differences in stress-reactivity, including in the depression. However, the retrospective examination of CT in development of the stress-sensitive cortico-striatal-limbic patients with psychosis has been found to be a valid and regions could partly explain why CT contributes reliable source when collecting data in previous studies .
differently to risk for depression in women and men in linewith previous indications that women might be more susceptible to the negative effects of stress and toearly trauma in general. The presence of ASEs is today Childhood trauma was significantly associated with most often viewed as a stage in the development of higher levels of ASEs (EASE total score) in women in the schizophrenia . The results of this study could early treated phases of schizophrenia. This seemed to be indicate that CT adds to this particular development.
specifically driven by emotional abuse, emotional neglect There are several possible explanations of the link between and physical neglect. Our data support including emotional CT, ASEs and depression. It is well-known that CT is a risk abuse, emotional neglect and physical neglect in addition to factor for the development of depression. If CT also increases the more frequently investigated sexual abuse and physical the risk of ASEs in susceptible individuals, the link between abuse when investigating associations between CT and pre- ASE and depression could either be a statistical artifact or psychotic and psychotic features.
indicate that the presence of ASEs further increases the risk ofdepression. A model where depression mediates the effect ofCT on ASEs in the strict definition of the term is, however, Role of funding source unlikely, since ASEs and CT are thought to be relatively stableover time, while depression fluctuates. We can however not Funding for this study was provided by Innlandet completely rule out that depressive individuals could be biased Hospital Trust (grant number 150229). The funding source towards reporting both more CTs and more ASEs. Empirical had no further role in study design; in the collection, analysis studies documenting the stability of ASEs over time are thus and interpretation of data; in the writing of the report; and in required. Finally, as we know that ASEs are present before the the decision to submit the paper for publication.
onset of psychosis and thus could potentially be presentalready in childhood and adolescence , they could interactwith difficulties in eliciting or receiving emotional support, which in turn could increase the risk of depression. Analternative explanation could be that females have a more EH, IM, PM, MØ and BN planned the current study, and complex response to trauma involving more ASE-like OAA contributed to the study design. EH and UB depersonalization and dissociation like phenomena contributed to data collection. EH conducted the statistical . However, the lack of gender differences in relevant analyses and also wrote the first draft of the manuscript. EH, EASE subscales does not support this hypothesis at present.
IM and MA contributed to the analyses. All authors E. Haug et al. / Comprehensive Psychiatry 56 (2015) 35–41 participated in critical revision of manuscript drafts and approved the final version.
Author disclosure All authors declare no conflict of interest.
The authors thank the patients for participating in the study. We also thank Innlandet Hospital Trust for making convenient and necessary arrangements for the work on this article. BN was supported by an NHMRC Career Develop- ment Fellowship (#1027532).
E. Haug et al. / Comprehensive Psychiatry 56 (2015) 35–41

Tadalafil (Adcirca®) Issued by PHA's Scientific Leadership Council Information is based on the United States Food and Drug Administration drug labeling Last Updated November 2013 WHAT IS TADALAFIL? Tadalafil is an oral medication called a phosphodiesterase-5 (PDE5) inhibitor approved for the treatment of pulmonary arterial hypertension (PAH) in World Health Organization (WHO) Group 1

Symptom control in the last days of life Owner Anne Garry Contributions from Specialist Palliative Care teams in York and Scarborough Jane Crewe, Lynn Ridley and Diabetes team Version 3 Date of issue December 2014 Review date December 2017 Principles of symptom management in last days of life These principles are applicable to the care of patients who may be dying from any cause Recognise that death is approaching Studies have found that dying patients will manifest some or all of the following: