Consequences of acute stress and cortisol manipulation on the physiology, behavior, and reproductive outcome of female pacific salmon on spawning grounds 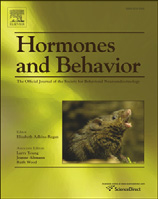 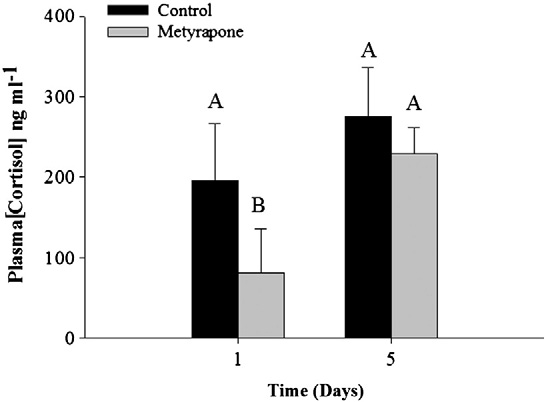 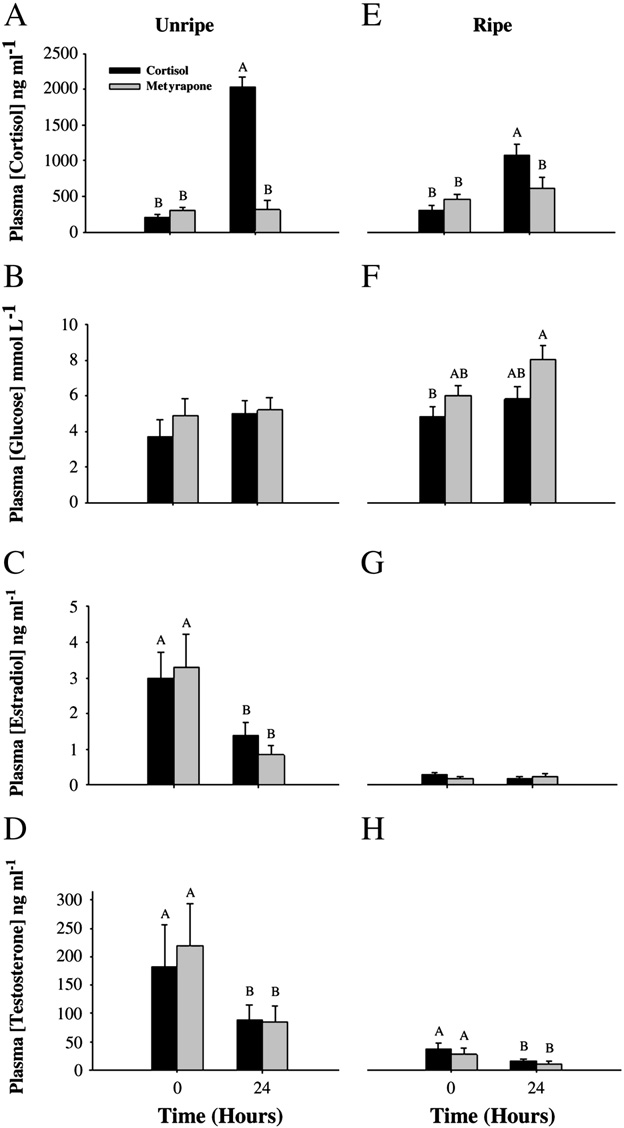 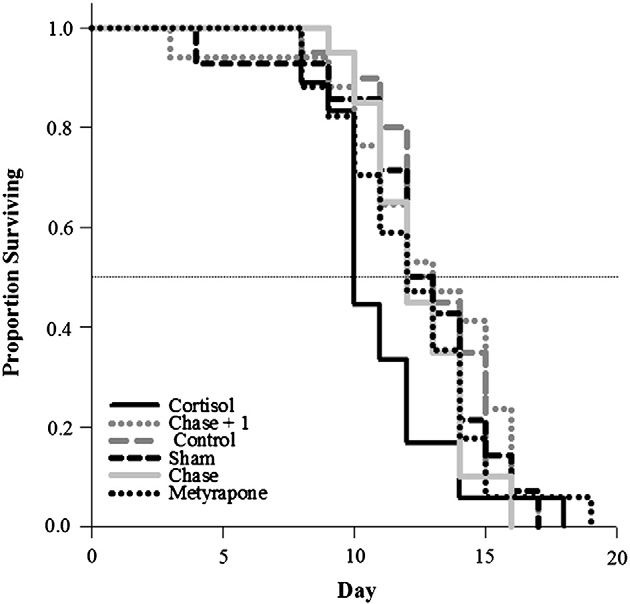 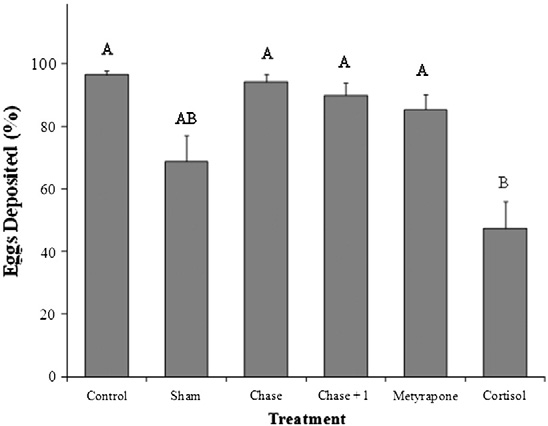 S.H. McConnachie et al. / Hormones and Behavior 62 (2012) 67–76 Fig. 5. (A and B). Figure A presents the percentage of pink salmon (Oncorhynchus gorbuscha) that became ripe during the behavior trials and thus were able to spawn during theenclosure experiment. Figure B presents the percentage of total eggs available (%) that were deposited during the 4 day trials by ripened ﬁsh across treatment groups. Sample sizeswere as follows: chase = 1/9, chase + 1 = 2/8, control = 3/9, cortisol = 3/10, metyrapone = 2/9, sham = 4/8. All data were transformed into ArcSine (square root) values beforebeing analyzed. Dissimilar letters denote signiﬁcant differences among treatment groups (Tukey–Kramer HSD test, p b 0.05).
outcome of pink salmon on their spawning grounds. Conversely, acute Nonetheless, collectively these data are consistent with the notion stressors that also presumably elevated plasma cortisol, namely exercise that semelparous salmon may be resilient to the effects of stress hor- and air exposure, did not affect reproductive outcomes in either ripe or mones during the ﬁnal phases of reproduction unripe ﬁsh. These results demonstrate that a sustained elevation of plas- ). However, in the case of Paciﬁc salmon, it is unclear ma cortisol carries signiﬁcant reproductive costs for semelparous salmon when such a transition takes place during the migration. In main- on their spawning grounds (despite their high baseline cortisol levels), stream riverine habitats, ﬁsh mount a cortisol response to a stressor but that temporary elevations may not. In an ecologically relevant and cortisol does, indeed, result in suppression of reproductive context, events that could elicit a prolonged stress response that might hormone titers ). Yet, our data indi- last 2–5 days include periods of high water temperature ( cate that, upon arrival at spawning grounds, reproductive hormones are ), seasonally high (or low) river discharge ), not altered by either certain acute stressors that are expected to elevate river obstructions or regions that are hydraulically complex ( plasma cortisol levels (see below) or experimental cortisol manipulation.
), or disease ). In contrast, very short- Because we did not observe any differences between ripe and unripe ﬁsh term stressors, which might include ﬁsheries interactions, failed preda- with respect to the inﬂuence of cortisol elevation on hormone titers, the tion events, and antagonistic interactions with conspeciﬁcs just prior to onset of resistance to elevated cortisol appears to occur prior to ovulation, or during spawning may result in fewer effects on reproduction.
a point that warrants investigation in a further study. The transition maybe associated with the decline from stable levels of reproductive hor- Cortisol manipulation and reproductive hormones mones as the ﬁsh move into an ovulated state. During ovulation, thereis a critical need to increase 17α-hydroxy-20 β-dihydroprogesterone In a variety of ﬁsh species, elevation of glucocorticoids results in de- (17α, 20β-P) to complete reproduction because this creased reproductive hormone concentrations (see review by hormone induces sexual maturation necessary for the ovulation process, ), which in iteroparous ﬁsh can lead to a postponed whereas estradiol and testosterone mediate maturation and ovulation reproductive event. Additionally, a stressful reproductive environment (e.g., ﬁsh exposed to bleached kraft pulp mill efﬂuent) negativelyimpacts reproductive ﬁtness in various ways Channel longevity and reproductive success ). In semelparous Paciﬁc salmonexposed to a natural hydraulic challenge during their reproductive Cortisol-treated ﬁsh exhibited decreased longevity and high egg migration up the Fraser River system in BC (at the Hell's Gate ﬁshway, retention during the channel experiment, despite our ﬁnding that in the Thompson Canyon, BC, ), cortisol treatment did not change reproductive hormone titers.
reproductive hormone titers (i.e., 11-ketotestosterone, estradiol and Therefore, chronic cortisol elevation on spawning grounds negatively testosterone) fall dramatically while cortisol levels increase. Further inﬂuences reproductive function and success. Even though egg re- upstream, where the river is less challenging and perhaps less than lease by metyrapone- and sham-treated ﬁsh during the unripe enclo- 1 day later in the migration, baseline values of cortisol are restored sure experiment was reduced when compared to other treatment ( 100 ng ml−1) and reproductive hormones return to their elevated groups, overall these ﬁsh still released the majority of their eggs and levels Yet prior to the present study, the potential longevity was comparable to control groups. As such, even if the interactions between cortisol and reproductive hormone oscillations cocoa butter implant did prevent some egg release in the sham, corti- had not been investigated in terms of impacts on behavior at spawning sol, and metyrapone treatments (see discussion below), the existence grounds and reproduction for a semelparous species. The raceway of differences among these treatments lends support to the notion blood proﬁles and hormone validation data collected in the present that the driver of the differences was of a physiological nature rather study indicated that, even though cortisol titers in cortisol-treated than an artifact of the use of cocoa butter.
ﬁsh were increased to levels observed in senescing salmon ( This suite of ﬁndings is particularly important because ﬁsheries managers are concerned with the largely unexplained phenomenon cortisol treatment did not alter reproductive hormone titers in either of "pre-spawn mortality"—ﬁsh that die on spawning grounds either unripe or ripe ﬁsh.
without spawning or with signiﬁcant egg retention It is important to recognize that the experimental elevation of cor- The eggs of such ﬁshes are often still viable ( tisol titers with IP implants is not itself a stress response, but instead so it appears that other factors are inhibiting reproductive be- results in elevated cortisol that is consistent with a stress response.
havior and/or are advancing senescence. In a study of sockeye salmon 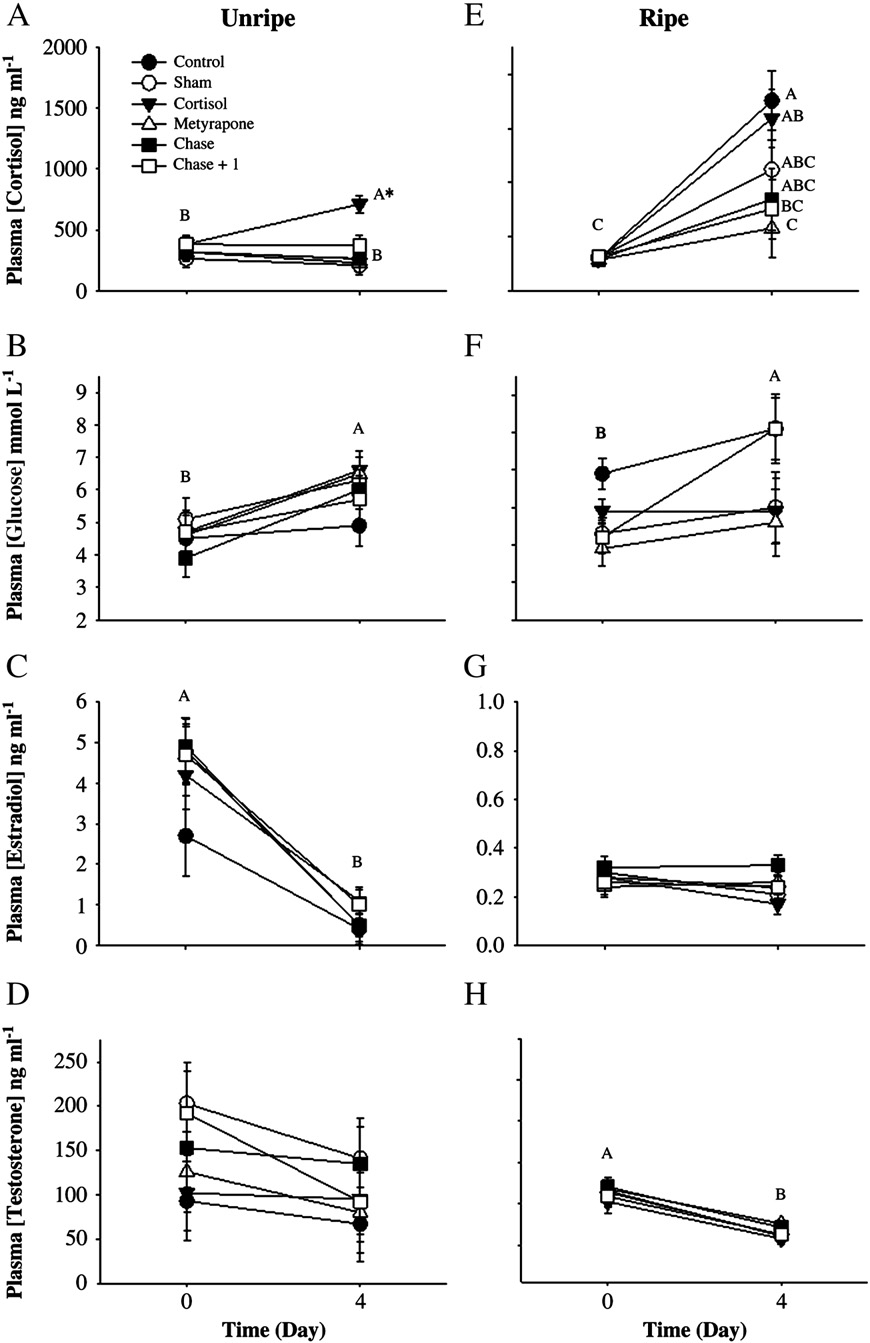 Personalised, Serendipitous and Diverse Linked Data Resource Recommendations Milan Dojchinovski and Tomas Vitvar Web Intelligence Research Group Faculty of Information Technology Czech Technical University in Prague Abstract. Due to the huge and diverse amount of information, the ac-tual access to a piece of information in the Linked Open Data (LOD)cloud still demands significant amount of effort. To overcome this prob-lem, number of Linked Data based recommender systems have been de-veloped. However, they have been primarily developed for a particulardomain, they require human intervention in the dataset pre-processingstep, and they can be hardly adopted to new datasets. In this paper, wepresent our method for personalised access to Linked Data, in particularfocusing on its applicability and its salient features.