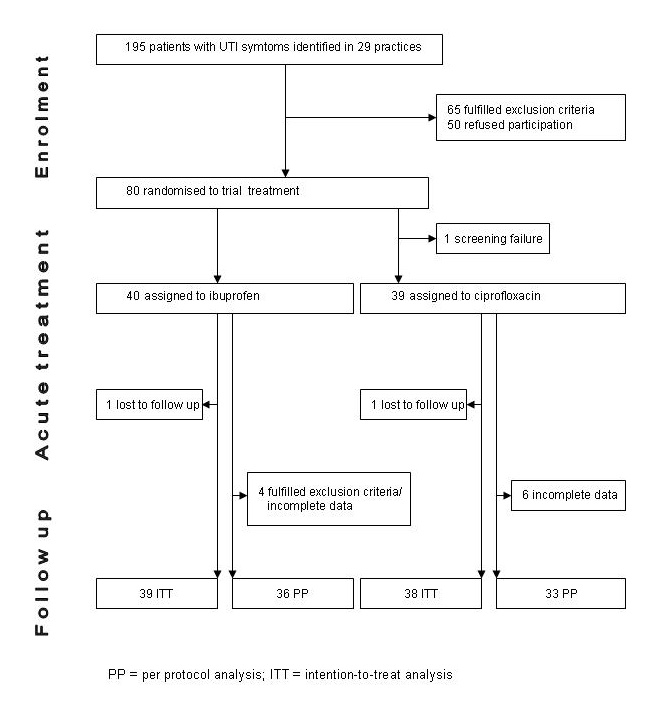 Bleidorn et al. BMC Medicine 2010, 8:30
Figure 1 Participant flow.
groups. In particular, for the course of dysuria no differ- In regards to re-consultation with persistent or worsen- ence between groups could be shown (Table).
ing symptoms up to Day 4, four patients in the ciprofloxa- Considering urine cultures on Day 7, negative urine cin group and five patients in the ibuprofen group cultures (less than 102 cfu/ml) occurred more often in the returned during the treatment period. Most often GPs ciprofloxacin group (23/33, 71.9%) than in the ibuprofen then prescribed one of the following antibiotics: group (16/36, 48.5%). However, this was not significant (P trimethoprim, ciprofloxacin or cotrimoxazole. Most = 0.093, data not shown).
patients did not re-consult again, with one exception Bleidorn et al. BMC Medicine 2010, 8:30
Table 1: Baseline characteristics
Ibuprofen n = 36
Ciprofloxacin n = 33
Previous UTI (in last two years)
Mean symptom duration, days (SD)
leukocytes positive Positive urine culture
Enterococcus faecalis Streptococcus agalactiae Klebsiella spp.
resistance to ciprofloxacin Symptoms at inclusion
low abdominal pain Mean score at inclusion (range 0 to 4)
low abdominal pain sum score (range 0 to 12) where the antibiotic therapy was changed again. In line On follow up on Day 28, one ciprofloxacin patient and with the study protocol, these patients remained in their two ibuprofen patients (P = 1.0) reported a relapse. A groups for the analysis. In total, 12/36 (33.3%) patients in total of 58 adverse events were retrieved by telephone the ibuprofen group and 6/33 (18.2%) in the ciprofloxacin interviews, 32 in the ibuprofen group vs. 26 in the cipro- group required secondary antibiotic treatment. This dif- floxacin group, thus including also conditions or symp- ference was notable, but not significant within this sam- toms with no obvious association with the drug ple size (Tab.
medication. Non-serious adverse events were reported inboth groups (11 in the ibuprofen group, 9 in the cipro-floxacin group). Mostly common gastrointestinal disor-ders were involved, followed by upper respiratory tract Table 2: Symptom resolution Day 4/Day7
infections, which are likely to be coincident rather than Ibuprofen n = 36
Ciprofloxacin n = 33
related to the study treatment, and headache.
The results of this pilot study suggest a tendency towardsequivalence of ibuprofen as compared to ciprofloxacin for treatment of uncomplicated UTI with regard to symp- Complete symptom resolution (sum score = 0), per protocol tom resolution and symptom course. The difference in 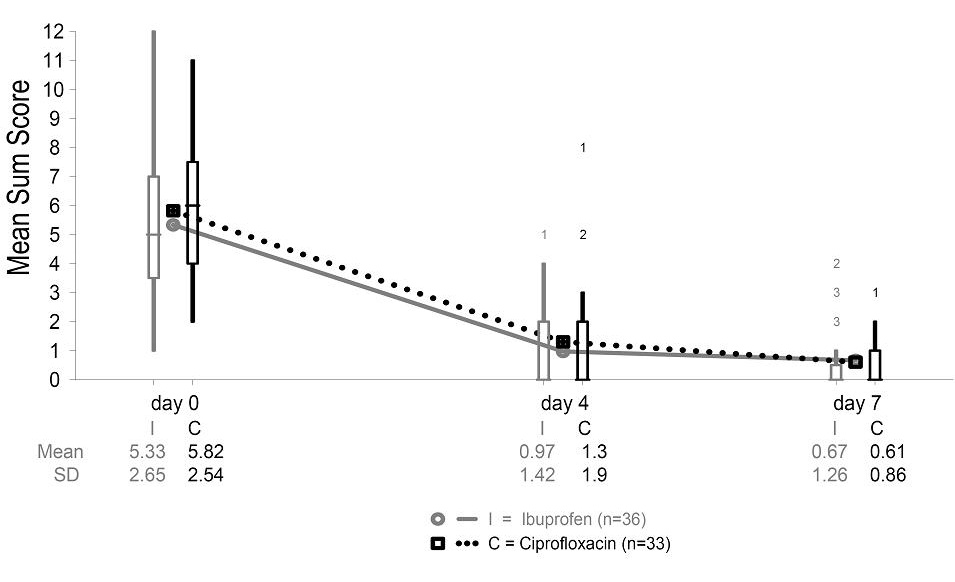 This article is protected by copyright. To share or copy this article, please visit copyright.com. Use ISSN#1543953X. To subscribe, visit imjournal.com The Long-term Health Implications of Depo-Provera Edra Spevack, ND The reproductive health of adolescents and young indicate a correlation between DMPA use and an adults is a major determinant of their future well-being. increased risk of fracture and HIV infection. These

January - March 2010 / # 1 2 hours ago our wandering female harrier from the west In this issue: coast flew straight into the heart of Lesotho! She is now close to a smal stream in a high altitude val ey, about 1 More travels by Lockie . . . . . . Rob Simmons 32 km from the Katse Dam. She has flown a straight line distance of 1173 km from her coastal "home" near