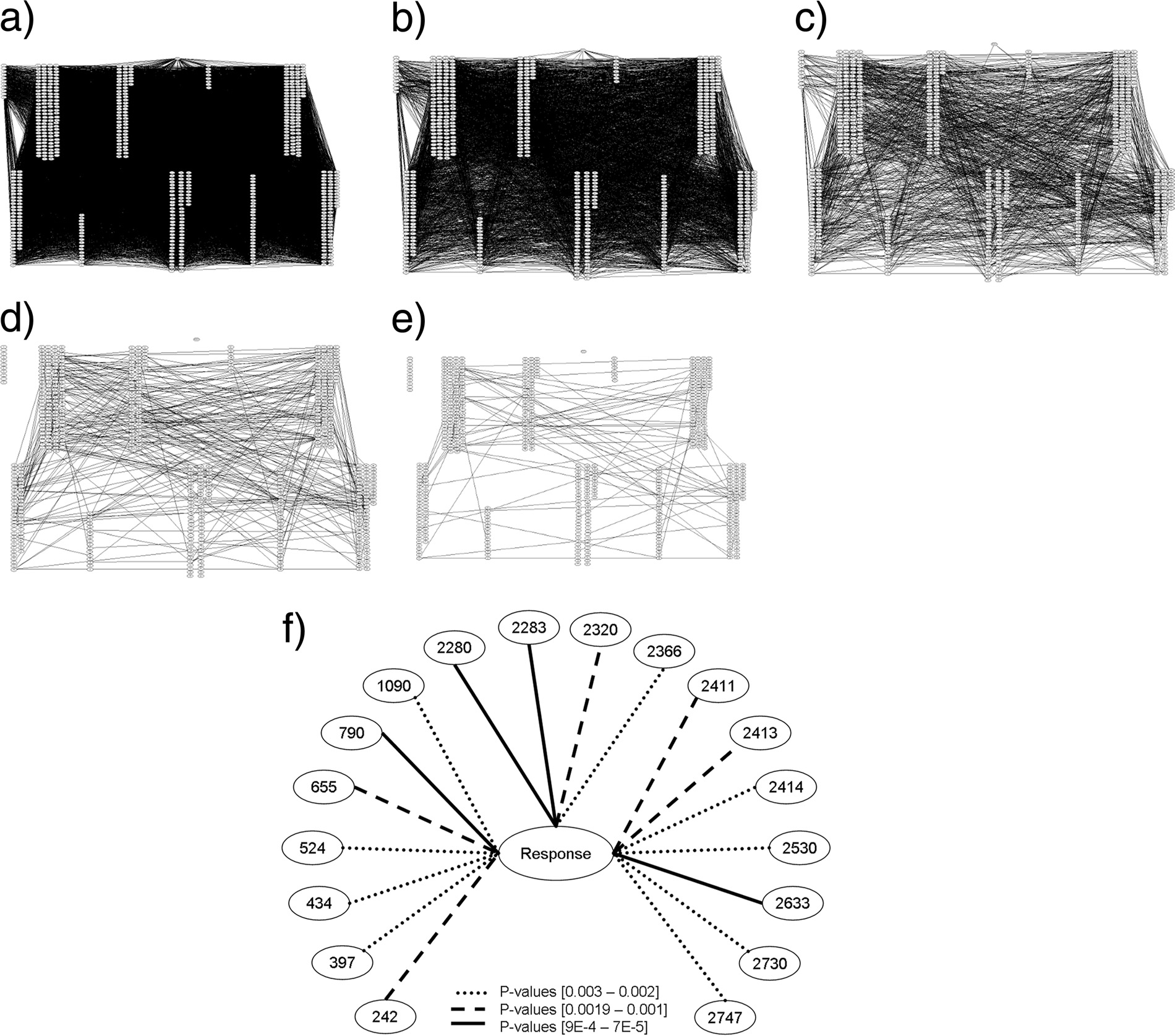 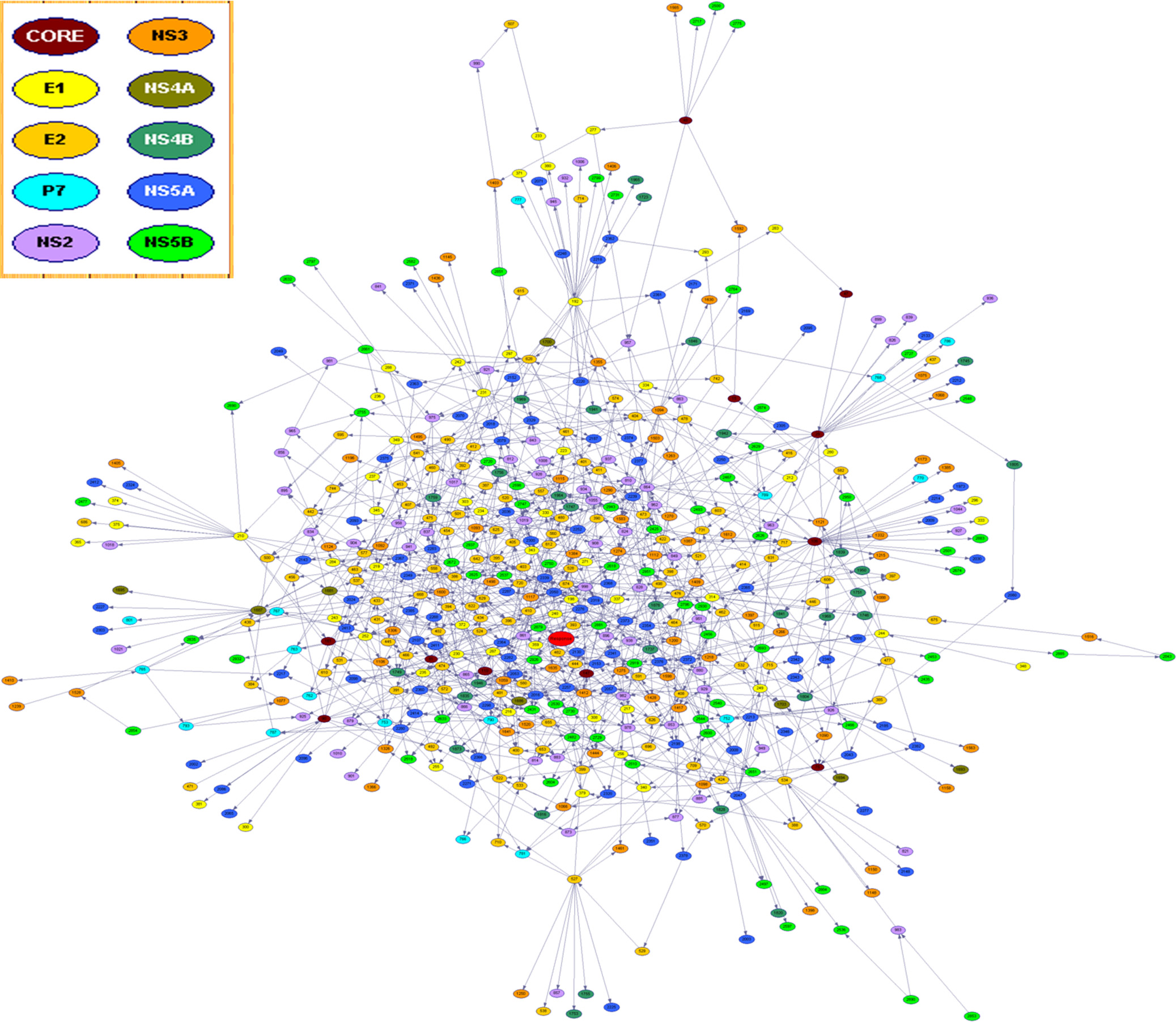 FIG. 2. BN (P ⫽ 3) of inferred relationships among the full-length HCV polyprotein sites and IFN-RBV therapy outcome. Polyprotein sites and outcome are represented as nodes in the graph. Relationships among features are represented as arcs. Features whose probabilisticdependencies exceed the conditional independency tests and GTT scoring are connected. The graph was constructed using a spring-embeddednetwork layout algorithm. Features are color-coded by region (inset), and therapy outcome is shown in red.
other proteins have almost equal measures of incoming (in-degree) and outgoing (out-degree) links.
Many essential properties of the polyprotein BN constructed using the 40 Virahep-C sequences, except for linkage to ther-apy, were observed with another BN constructed using HCVgenotype 1a full-length genome sequences obtained fromGenBank (n ⫽ 298). As shown in Fig. 3 and 4, the GenBankBN and Virahep-C BN have similar distributions of links, andinterrelationships among individual proteins are highly corre- FIG. 3. Distribution of links among polymorphic sites of the HCV lated (r ⫽ 0.99, P ⬍ 0.0001), indicating that the overall coor- 1a NS5A or E2 proteins with other viral proteins in the HCV poly- dination among substitutions in the HCV genotype 1a data set protein BN. E2 and NS5A interrelationships are compared between has been adequately represented by the Virahep-C sequences the HCV polyprotein BNs inferred from GenBank data and Vira- used in this study. However, variations in the number of poly- hep-C data. Sites (%), percentage of sites from each region that werelinked to sites from NS5A or E2.
morphic sites are observed between the GenBank BN (n ⫽ 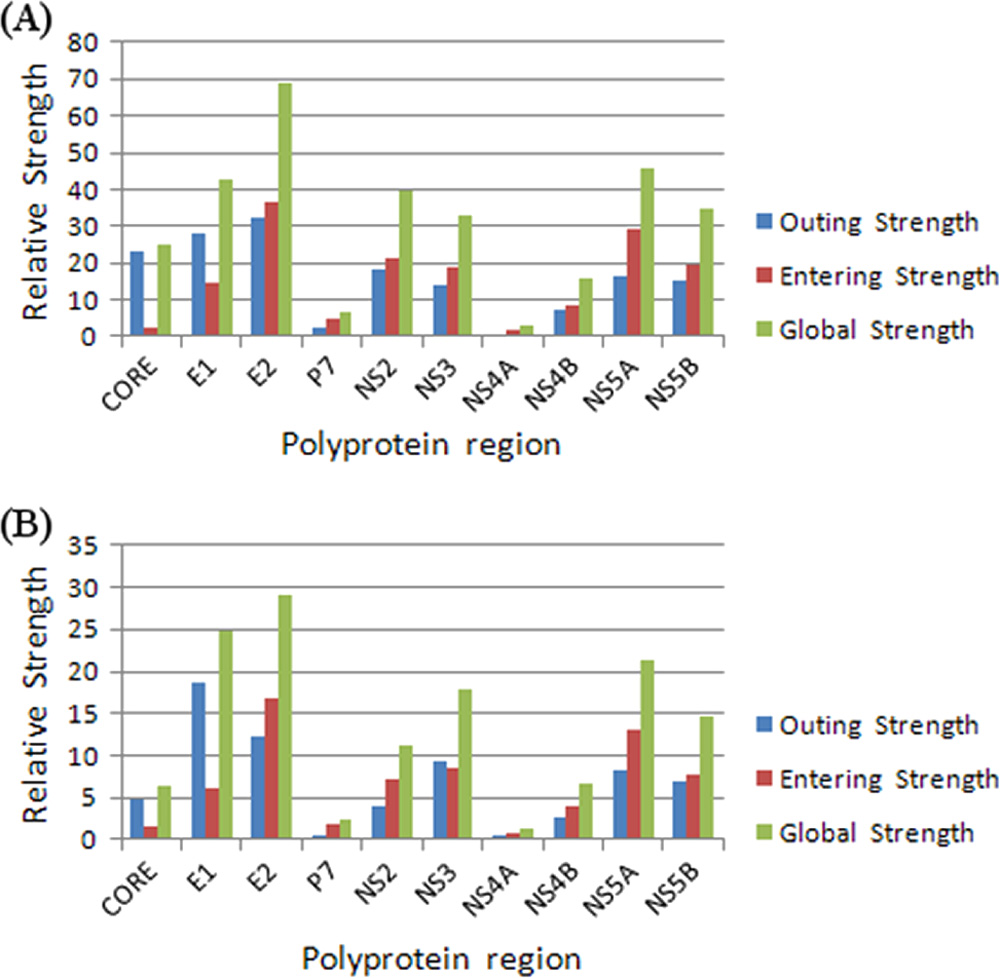 HCV GENETIC PATTERNS OF ADAPTATION TO IFN THERAPY Protein sites relevant to therapy outcome. Observation of a
significant interconnection and coordination among HCV pro-teins suggests that all proteins contribute to determining theUR/NR outcome. To analyze these contributions in more de-tail, BNs were constructed for the individual gene products.
Extensive dependencies between sites and association to ther-apy outcome were found in all individual polyprotein regions,albeit to different degrees. The E2 and NS5A regions werefound to form a more dense set of links than other regions ofthe polyprotein (Table 2).
Although many polymorphic sites were found to be inter- linked in the model shown in Fig. 1, indicating a significantcoordination of heterogeneity along the HCV polyprotein,there are a large number of sites with very few links, suggestingtheir marginal contribution to the polyprotein BN. To evaluatewhich proteins and amino acid sites were most associated withthe outcome, we conducted feature selection experiments. Byusing a naïve Bayesian network with feature selection, the E2and NS5A polyprotein regions were found to contribute thegreatest number of sites relevant to outcome (27.5% and26.3%, respectively) (Fig. 5). Similar results were observedwith four filtering methods for feature selection (Fig. 6). Each FIG. 4. Relative strength and direction of links associated with of the feature selection techniques extracted a certain number individual HCV proteins in the Virahep-C BN (A) and GenBank BN of the most relevant sites. A greater proportion of sites were (B). The total strength of all outgoing links (blue bars), incoming links(red bars), and the global strength (green bars) are shown for each selected from E2 and NS5A as relevant to the outcome (Fig.
6). The NS5A region consistently contributes a large numberof relevant sites with all four feature selection techniques.
Depending on the technique, 14.3% to 32% and 24.0% to 44% 1,296) and polyprotein BN (n ⫽ 551). Despite the greater of amino acid sites were, respectively, selected from E2 and number of polymorphic sites in the GenBank sequences, the NS5A as contributing to the outcome. All of the techniques Virahep-C sequences contain 25 unique polymorphic sites dis- used selected significantly overlapping sets of the relevant tributed among all but core proteins: at positions 230, 349, and amino acid sites from all proteins, albeit with variations in 381 in E1; 385, 582, 631, and 742 in E2; 768 in P7; 826 and 926 ranking among the selected sites (see Table S2 in the supple- in NS2; 1385, 1461, 1520, 1528, 1565, and 1592 in NS3; 1681 in mental material). A set of sites selected using one of the NS4A; 1805, 1820, and 1846 in NS4B; 2003, 2049, and 2343 in techniques is shown in Table 3.
NS5A; and 2500 and 2548 in NS5B. These findings—in con- Relationships between variables in a BN may be interpreted junction with the observation of the 1.7-fold increase in the as being causal (22), which can be applied to detect relevance number of links between sites in E1 and E2 and the 2-fold of a variable to define a target feature, in this case, therapy increase between sites in E2 and NS5A in the Virahep-C BN outcome. Analysis of the strength of influence measured as the compared to the GenBank BN (Fig. 3)—suggest the treat- Kullback-Leibler divergence (69) between the joint probability ment-specific variations in coordination of substitutions at the distribution with and without the arc shows that sites from the genomic sites in the UR/NR HCV strains.
E2 and NS5A proteins have the strongest overall influences on TABLE 2. Propertiesa of the BNs for individual protein regions No. of linksb a Properties correspond to protein-BN inferred from the Virahep-C data using alignments of the individual HCV gene products.
b The maximum number of incoming links was constrained to 10. The NS3-BN reached maximum complexity at a constraint of 11. Arc count, total number of links in the BN; Avg or Max. outcomes, numbers of amino acid states (heterogeneity) of protein sites. 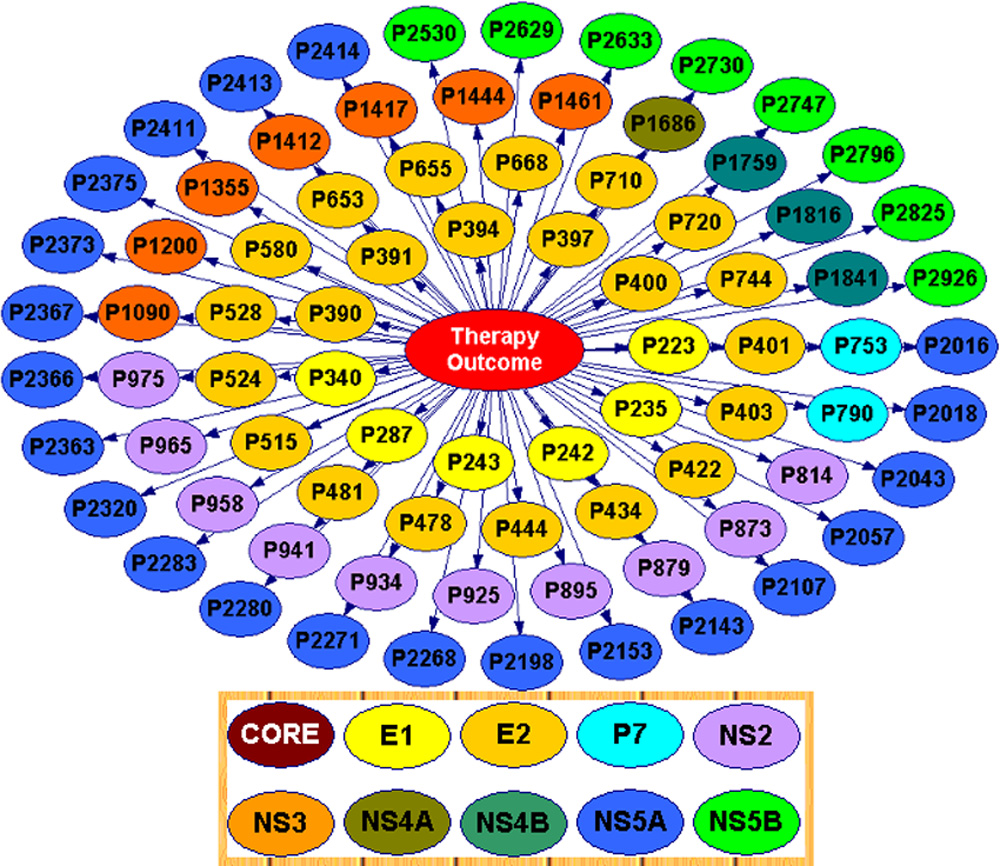 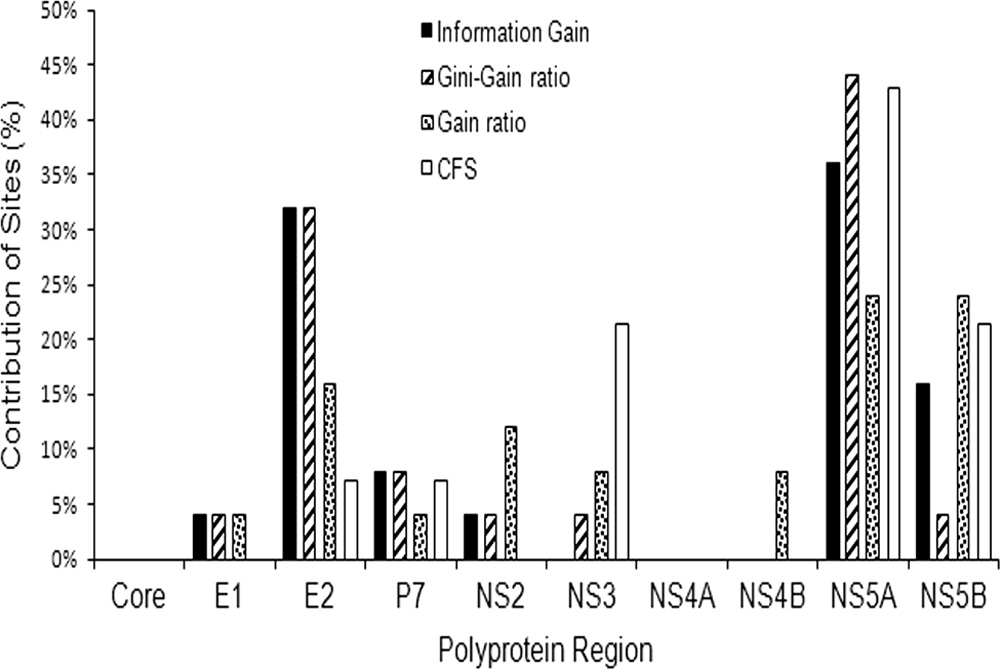 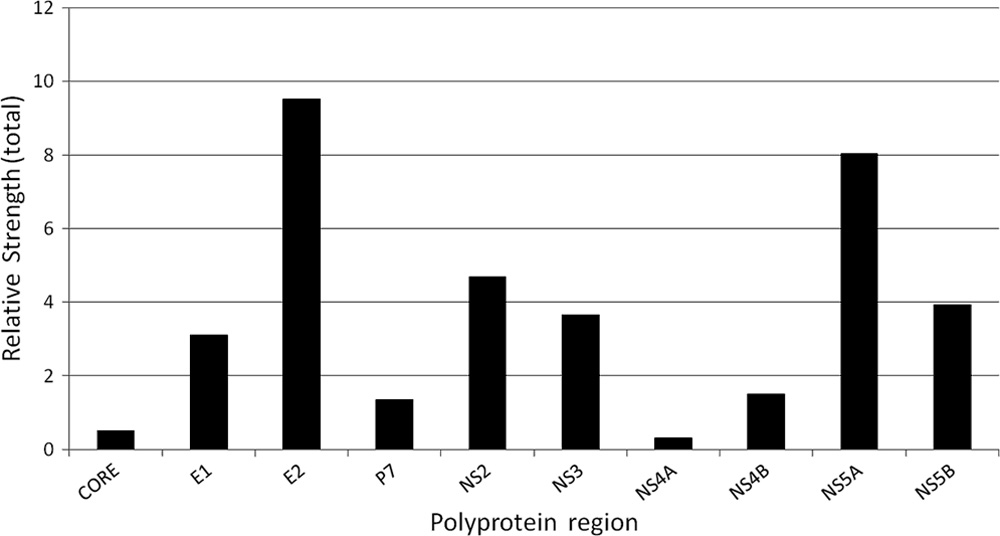 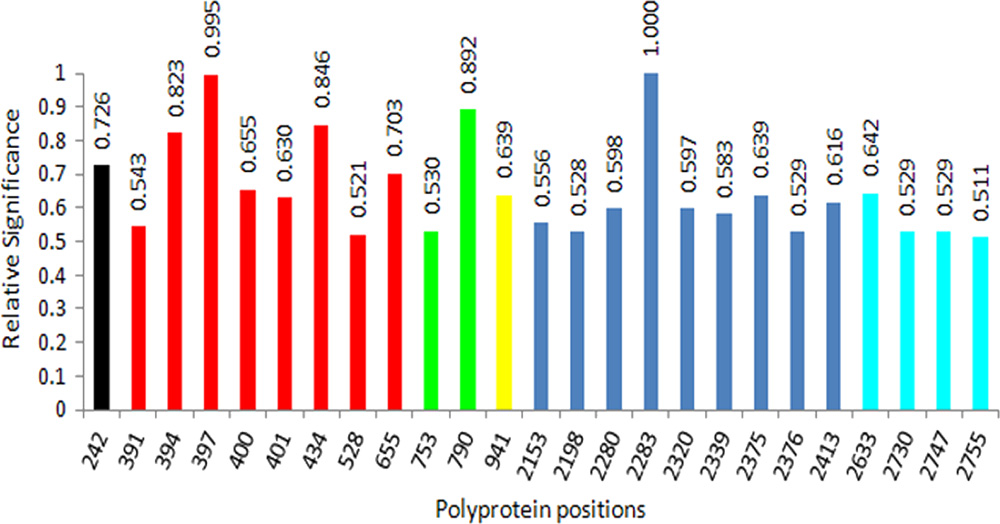