tripod at a fixed distance from the floor but was adjusted to Table 1 Baseline demographic characteristics of study subjects in theLAPEX 2000 LipoLaser study the specific height of each individual participant. Standard-ized waist measurements were taken at baseline, treatment 3, and treatment 8. Standardized photographs were taken beforeand after the initial treatment, treatment 3, and treatment 8.
Weight was measured and BMI was calculated at baseline and at treatment 8 (week 4). Blood pressure was measured at baseline, treatment 3, and treatment 8. All adverse events were recorded in the case report forms.
The waist circumference measurements were compared between the control and laser-treated group using a t test.
The data were analyzed using completers and the more Waist circumference (cm) conservative intent to treat analysis. The blinded observers judged improvement on a 0–3 scale. Zero on this qualitative Body mass index (kg/m2) scale represented no improvement, 1 represented mild improvement, 2 represented moderate improvement, and 3 Systolic blood pressure represented marked improvement. The results of the two observers were averaged and compared by t test.
Diastolic blood pressure75.35 In Vitro Studies Using Human Fat Cells Values are means and standard deviation (SD).
Experiment 1 Does the laser activate the complement using a 10× (Zeiss Achroplan objective) and a 20× (LD plan NeoFluor objective), and a Zeiss Axiocam HRc camera [ Human adipose-derived stem cells obtained from subcu- taneous fat during abdominal surgery were plated and Experiment 3 Does the laser increase triglyceride release or differentiated to form adipocytes as described by Bunnel et lipolysis from adipocytes? al. [Human adipocytes were differentiated in 12-well This experiment used human adipocytes in eight 6-well plates. Three of the wells in the plates were left as a control.
plates. Two wells in each plate were used as a control with Fresh plasma replaced one third of the cell culture media inanother three wells. The next three wells had one third ofthe media replaced with plasma that was heat-inactivated todestroy complement. The final three wells in each plate hadone third of the media replaced by a combination of freshhuman plasma and white blood cells. One experimentalplate was irradiated with the LAPEX 2000 LipoLaser for10 min and the other was left as a non-irradiated control.
The cells were then evaluated for evidence of lysis underthe microscope.
Experiment 2 Does the laser kill adipocytes? To evaluate influence of LAPEX 2000 LipoLaser on adipose cell death and viability, we used LIVE/DEAD® CellViability Assays (Invitrogen). Human adipocytes were differ-entiated in 96-well plates. The experimental plate was Fig. 1 The difference in girth loss between placebo and the LAPEX irradiated with the LAPEX 2000 LipoLaser for 10 min and 2000 LipoLaser at treatments 1, 3, and 8 were all 0.4 to 0.5 cm, and the other was left as a non-irradiated control. The cells were the difference in girth loss at treatment 3 was statistically significant then probed with cell viability assay reagent using the (p < 0.05). The difference in cumulative girth loss compared fromtreatment 1 to 3 was statistically significant by LOCF or completer's manufacturer's protocol. Calcein and propidium iodide analysis (p < 0.05). The difference in cumulative girth loss at emissions were then analyzed using a fluorescent plate treatment 8 was significant in subjects who remained within 1.5 kg reader. Images were acquired on a Zeiss Axiovert 40 CFL of their baseline weights (p < 0.05)

scheduling conflicts. There were no adverse events in eithergroup during the trial. The groups were well balanced atbaseline, and the group characteristics are illustrated inTable . Mean weight and BMI did not change significantlyover the eight treatments and 4 weeks. Blood pressure didnot change significantly from baseline to treatment 3, fromtreatment 3 to treatment 8, or from baseline to treatment 8.
The mean placebo subtracted reductions in waist girth attreatments 1, 3, and 8 with the LAPEX 2000 LipoLaserwere 0.49, 0.41, and 0.40 cm, respectively. This singletreatment difference, 0.41 cm (laser −0.59 ± 0.71 cm vs.
placebo −0.19 ± 0.47 cm) (mean±SD), was significant(p < 0.05) on the third treatment done during week 2 in thecompleters analysis, but was not statistically significant by Fig. 2 Blinded appearance ratings on a 0–3 scale over 4 weeks and the intent to treat analysis. The cumulative girth loss at eight treatments favored the LAPEX 2000 LipoLaser treatment treatment 3 on week 2 was a significant 1.74 cm compared to the placebo treatment (p < 0.001) (laser −1.89 ± 2.97 cm vs. placebo −0.16 ± 2.46 cm, media containing 10% fetal bovine serum (FBS). Two other p < 0.05) on both the completers' analysis and by intent to wells had 25% of the media with 10% FBS replaced with treat analysis. Cumulative girth loss at treatment 8 (4 weeks of human serum with 10% FBS. The last two wells had 25% treatment) was 2.15 cm with 15 subjects in the laser group and of the media with 10% FBS replaced with heat-inactivated 16 subjects in the placebo group (laser −0.78 ± 2.82 cm vs.
human serum with 10% FBS. Four of the plates were placebo 1.35 ± 2.64 cm) in those who maintained their weight irradiated for 10 min with the laser and the other four plates within 1.5 kg of their baseline weight (p < 0.05). Cumulative served as a non-irradiated control. Media from the eight girth loss at treatment 8 (4 weeks of treatment) was 1.33 cm replicates of each of the three conditions in the laser with 19 subjects completing in the placebo group and 20 irradiated plates and the non-irradiated control plates were subjects completing in the laser group (laser −0.87 ± 2.65 cm used for glycerol and triglyceride determination.
vs. placebo 0.47 ± 3.19 cm) regardless of weight change (p=NS). The standardized pictures of the participants showed asignificant 1.21 difference (laser 1.21 ± 0.42 vs. placebo0 ± 0) in appearance on a 0–3 scale favoring the LAPEX 2000 LipoLaser group comparing baseline to week 4 (treatment 8)pictures (p < 0.001). When only those participants that remained within 1.5 kg of their baseline weight (N = 31)were considered, the improvement in appearance increased to Forty subjects participated in the clinical trial. Twenty were 1.25 (laser 1.25 ± 0.45 vs. placebo 0 ± 0) on a 0–3 scale treated with the LAPEX 2000 LipoLaser and 20 were comparing baseline to week 4 (treatment 8) pictures treated with an inactive version of the device. One subject (p < 0.001). The girth difference in the laser group compared in the treatment group did not complete the study due to to the placebo group is illustrated in Fig. The differences in Fig. 3 Woman before and after4 weeks and eight treatmentswith the LAPEX 2000LipoLaser

Fig. 4 Man before and after4 weeks and eight treatmentswith the LAPEX 2000LipoLaser appearance from baseline to week 4 (treatment 8) in the whole Experiment 2 The laser does not kill adipocytes.
group and the subjects who remained within 1.5 kg of their The number of viable cells in the laser-treated or baseline weight are illustrated in Figs. and . Fig. untreated group as determined by the propidium iodide shows a placebo subject at baseline and 4 weeks (treatment 8) assay were similar, but calcein levels were lower in the who remained within 1.5 kg of her baseline weight. Figs. laser-treated cells (Fig. Calcein, a non-fluorescent dye, and show a subject who lost 2.2 kg and 2.7 kg in the laser gets transported through the cell membrane, becomes and placebo treatment groups, respectively.
fluorescent due to cleavage with cellular esterases, and getstrapped intracellularly. Normally functioning cells canextrude the entrapped dye. Considering the equal cell In Vitro Study Using Human Fat Cells viability in the two groups, lower calcein levels in thelaser-treated group suggests either intact metabolic func- Experiment 1 The laser does not activate the complement tioning of cells and/or reduction of cell-trapped calcein, perhaps by leakage.
The fat cells that came into contact with plasma or These findings are also consistent with the studies by plasma with white blood cells were lysed in both the laser- Niera [] in which the laser-treated cells showed micro- treated and the control plate, but cells in the control wells or pores in the membrane, which presumably contributed to in wells with heat-inactivated plasma were not lysed. This the leakage of fat from those cells.
indicates that serum complement does lyse fat cells, but thatthe laser does not activate complement. This is consistent Experiment 3 The laser increases triglyceride release, but with the mechanism shown by Niera [] in which the laser not lipolysis from adipocytes. Baseline triglycerides in the created pores through which the fat leaked from the fat cells control wells were undetectable and were increased, as into the interstitial space.
expected, in the wells with serum. The control wells did not Fig. 5 Woman before and after4 weeks and eight treatmentswith the placebo LAPEX 2000LipoLaser who maintained herweight within 1.5 kg of startingweight 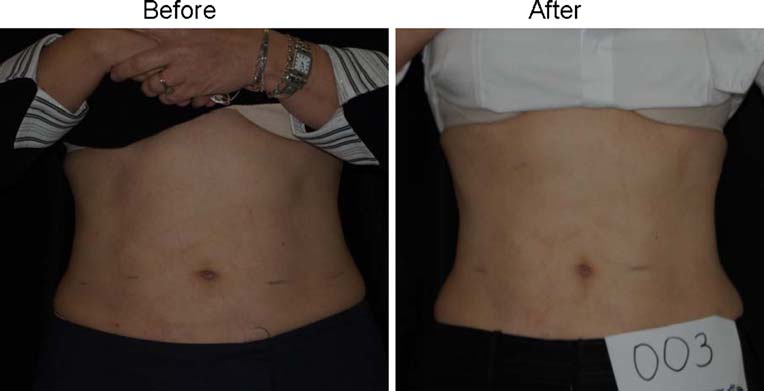 January—April 2013 AfCiC News Action for Children in Conflict (AfCiC) "Working towards a world of equal and sustainable opportunities for every Child From street freedom to a life of Hope Who is AfCiC? The Interim Care Centre for street chil- sional authority. They are incorporated in streets, things were not different. We