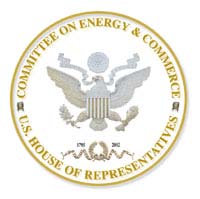 Chairman, R-Texas
Report Raises New Questions
About Climate Change Assessments
‘It is important to note the isolation of the paleoclimate community; even though they rely heavily on statistical methods they do not seem to be interacting with the statistical community. Additionally, we judge that the sharing of research materials, data and results was haphazardly and grudgingly done. In this case we judge that there was too much reliance on peer review, which was not necessarily independent. Moreover, the work has been sufficiently politicized that this community can hardly reassess their public positions without losing credibility. Overall, our committee believes that Dr. Mann's assessments that the decade of the 1990s was the hottest decade of the millennium and that 1998 was the hottest year of the millennium cannot be supported by his analysis.' – Excerpt from Wegman report
Background: On June 23, 2005, following reports of a dispute surrounding two key historical temperature studies
prominently used in the U.N.'s Intergovernmental Panel on Climate Change (IPCC) 2001 assessment report, the
Energy and Commerce Committee wrote the three authors of the studies, the IPCC, and the National Science
Foundation for information relating to the use of the studies by IPCC.
The studies in question, by Dr. Michael Mann, et al, formed the basis for the IPCC assessment's conclusion that the
increase in 20th century Northern Hemisphere temperatures is "likely to have been the largest of any century during
the past 1,000 years" and that the "1990s was the warmest decade and 1998 the warmest year" of the millennium.
Questions about the reliability of the Mann studies were of interest because they raised policy-relevant questions
concerning the objectivity of the IPCC and its reliance upon and "promotional" use of the studies' ‘hockey stick'
shaped historical temperature reconstruction.

Following receipt of the letter responses, committee staff informally sought advice from independent statisticians to
determine how best to assess the statistical information submitted. Dr. Edward Wegman, a prominent statistics
professor at George Mason University who is chair of the National Academy of Sciences' (NAS) Committee on
Applied and Theoretical Statistics, agreed to independently assess the data on a pro bono basis. Wegman is also a
board member of the American Statistical Association.
About the Wegman committee: Dr. Wegman assembled a committee of statisticians, including Dr. David Scott of Rice
University and Dr. Yasmin Said of The Johns Hopkins University. Also contributing were Denise Reeves of MITRE
Corp. and John T. Rigsby of the Naval Surface Warfare Center. All worked independent of the committee, pro bono, at
the direction of Wegman. In the course of Wegman's work, he also discussed and presented to other statisticians on
aspects of his analysis, including the Board of the American Statistical Association.
U.S. HOUSE COMMITTEE ON ENERGY AND COMMERCE PRESS OFFICE, (202) 225-5735, HTTP://ENERGYCOMMERCE.HOUSE.GOV Among the panel's findings and recommendations:

• Mann et al., misused certain statistical methods in their studies, which inappropriately produce hockey stick shapes in the temperature history. Wegman's analysis concludes that Mann's work cannot support claim that the1990s were the warmest decade of the millennium. Report: "Our committee believes that the assessments that the decade of the 1990s was the hottest decade in a millennium and that 1998 was the hottest year in a millennium cannot be supported by the MBH98/99 analysis. As mentioned earlier in our background section, tree ring proxies are typically calibrated to remove low frequency variations. The cycle of Medieval Warm Period and Little Ice Age that was widely recognized in 1990 has disappeared from the MBH98/99 analyses, thus making possible the hottest decade/hottest year claim. However, the methodology of MBH98/99 suppresses this low frequency information. The paucity of data in the more remote past makes the hottest-in-a-millennium claims essentially unverifiable." • A social network analysis revealed that the small community of paleoclimate researchers appear to review each other's work, and reuse many of the same data sets, which calls into question the independence of peer-review and temperature reconstructions. Report: "It is clear that many of the proxies are re-used in most of the papers. It is not surprising that the papers would obtain similar results and so cannot really claim to be independent verifications." • Although the researchers rely heavily on statistical methods, they do not seem to be interacting with the statistical community. Report: "As statisticians, we were struck by the isolation of communities such as the paleoclimate community that rely heavily on statistical methods, yet do not seem to be interacting with the mainstream statistical community. The public policy implications of this debate are financially staggering and yet apparently no independent statistical expertise was sought or used." • Authors of policy-related science assessments should not assess their own work. Report: "Especially when massive amounts of public monies and human lives are at stake, academic work should have a more intense level of scrutiny and review. It is especially the case that authors of policy-related documents like the IPCC report, Climate Change 2001: The Scientific Basis, should not be the same people as those that constructed the academic papers." • Policy-related climate science should have a more intense level of scrutiny and review involving statisticians. Federal research should involve interdisciplinary teams to avoid narrowly focused discipline research. Report: "With clinical trials for drugs and devices to be approved for human use by the FDA, review and consultation with statisticians is expected. Indeed, it is standard practice to include statisticians in the application-for-approval process. We judge this to be a good policy when public health and also when substantial amounts of monies are involved, for example, when there are major policy decisions to be made based on statistical assessments. In such cases, evaluation by statisticians should be standard practice. This evaluation phase should be a mandatory part of all grant applications and funded accordingly." • Federal research should emphasize fundamental understanding of the mechanisms of climate change, and should focus on interdisciplinary teams to avoid narrowly focused discipline research. Report: "While the paleoclimate reconstruction has gathered much publicity because it reinforces a policy agenda, it does not provide insight and understanding of the physical mechanisms of climate change… What is needed is deeper understanding of the physical mechanisms of climate change." U.S. HOUSE COMMITTEE ON ENERGY AND COMMERCE PRESS OFFICE, (202) 225-5735, HTTP://ENERGYCOMMERCE.HOUSE.GOV

For additional resources, please visit www.apic.org/EliminationGuides. Look for other topics in APIC's Elimination Guide Series, including: Catheter-Related Urinary Tract Infections MRSA in Long-Term Care Copyright © 2008 by APIC All rights reserved. No Part of this publication may be reproduced, stored in a retrieval system, or transmitted, in any form or by any means, electronic, mechanical, photocopying, recording, or otherwise, without prior written permission of the publisher.

Medicines to Avoid Before Allergy Skin Testing he American Academy of Otolaryngic Beta blockers are a risk factor for more serious and Allergy (AAOA) has developed this clinical treatment resistant anaphylaxis, making the use of beta care statement to assist healthcare providers blockers a relative contraindication to inhalant in determining which medicines patients