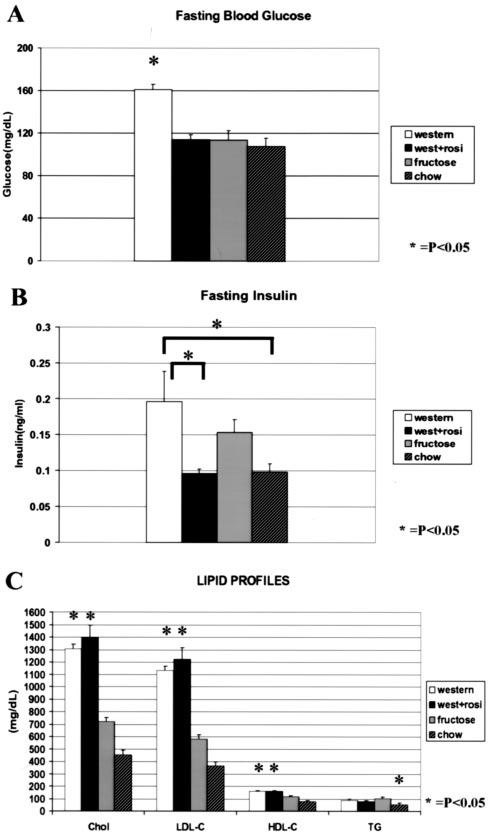 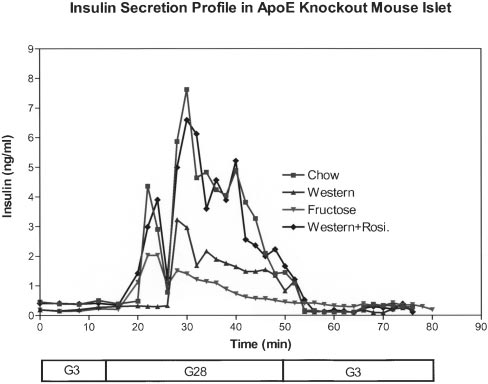 October 21, 2003
Figure 2. Pancreatic islet insulin release kinetics. Insulin release
profiles from pancreatic islet cells after perifusion of glucose
demonstrating loss of the first peak and an attenuated second
peak in WD animals, consistent with a pattern of type 2 diabe-
tes with normalization of this pattern in the WD animals treated
with rosiglitazone. Note the attenuation of both first and second
peaks in FD animals, consistent with insulin resistance and a
normal biphasic release profile in CD animals (n⫽10 animals per
group with 100 islets isolated per diet-fed group for perifusate
insulin levels).
nonsignificant trend toward higher insulin levels in the FDgroup at 5 weeks (Figure 1B). Insulin levels in the WD groupwith rosiglitazone remained normal (Figure 1B). Insulinrelease profiles from pancreatic islet cells with perifusion ofglucose demonstrated loss of the first-release peak and anattenuated second-release peak in WD animals, consistentwith a pattern of type 2 diabetes. In contrast, rosiglitazone-treated, WD-fed mice had normal release kinetics, similar tothe CD animals, which demonstrated a normal biphasicrelease profile. Attenuation of both first and second peaks Figure 1. Metabolic profiles. A, Fasting blood glucose in the WD
was observed in FD animals, consistent with a pattern of mice vs FD or CD after 5 weeks of diet. Note the significantly insulin resistance (Figure 2).
higher fasting glucose levels in the WD group vs FD or CD(*P⬍0.05). Rosiglitazone therapy in the WD-fed mice results inmaintenance of normoglycemia. B, Fasting insulin levels were significantly higher in the WD vs CD group, with a nonsignificant A graded elevation in total cholesterol, LDL, and HDL levels trend toward higher insulin levels in the FD group after 5 weeks was observed in the WD versus FD and CD groups. Triglyc- on feed. Rosiglitazone therapy in the WD mice results in insulinlevels similar to those of the CD group. C, Total cholesterol, eride levels were elevated in both the Western and FD LDL, and HDL levels in the WD, FD, and CD groups. A graded animals (Figure 1C). Total cholesterol, LDL, and HDL levels elevation in total cholesterol, LDL, and HDL levels was observed were elevated in the WD with rosiglitazone group to a level in the WD vs FD and CD groups. Triglyceride levels were ele-vated in the WD and FD animals, and WD mice with rosiglita- that was equal to that seen in the WD-alone group (Figure zone had levels that were no different than the WD-only group.
Histomorphometry
There were no differences in the extent of injury between any
Metabolic Profiles and Insulin Release Kinetics
of the groups as defined by number of elastic laminae broken Baseline glucose levels were normal in all groups before (data not shown). At 28 days after carotid wire injury, NI initiation of diets and after 1 week of feeding at the time of formation was significantly greater in the WD group com- carotid wire injury (data not shown). After 5 weeks on diet, at pared with the FD group (31 000⫾7000 ␮m2 versus the time of euthanasia (Figure 1A), fasting glucose levels 11 000⫾2500 ␮m2, Pⱕ0.05, n⫽10 per group). The FD group were higher in the WD group versus FD or CD groups had significantly greater NI than the CD group (11 000⫾2500 whereas glucose levels in mice fed a WD plus rosiglitazone ␮m2 versus 5130⫾1000 ␮m2, Pⱕ0.05, n⫽10 per group) remained normal. Fasting insulin levels were significantly (Figure 3A). There was a significant 65% reduction in NI higher in the WD group compared with CD group, with a formation in the WD group treated with rosiglitazone com- 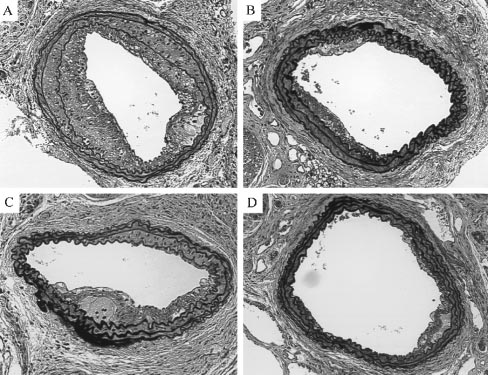 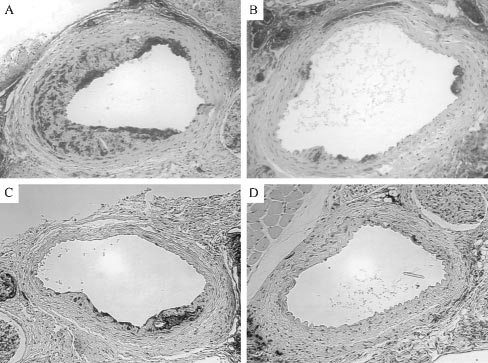 Phillips et al
Type 2 Diabetes Mellitus in apoEⴚ/ⴚ Mice
Figure 4. Representative examples of Movat-stained injured left
carotid arteries (LCA) from a mouse fed a WD showing robust
NI formation (A), a mouse fed a WD with rosiglitazone treatment
illustrating significantly less NI growth (B), a mouse fed a FD
with moderate NI growth (C), and a mouse fed CD showing min-
imal NI growth (D). Magnification ⫻200.
the other groups (Figure 3C). Representative examples ofMOVAT-stained arteries from each group are shown inFigures 4A through 4D, immunostaining for macrophages isshown in Figures 5A through 5D, and smooth muscle cellsare shown in Figures 6A through 6D. There was no signifi-cant difference in either media or EEL areas between groups(data not shown).
This is the first study to document a range of metabolicprofiles consistent with type 2 diabetes and insulin resistancein C57BL/6 apoE⫺/⫺ mice fed various diets. We show gradedNI formation after arterial injury being most robust in thesetting of type 2 diabetes plus hyperlipidemia. On a CD, the Figure 3. Histomorphometry and immunohistochemistry. A,
apoE⫺/⫺ mouse develops mild but significant hypercholester- Quantitative histomorphometry of plaque area in injured carotidarteries 4 weeks after wire denudation and 5 weeks on a WD,FD, CD, or WD with rosiglitazone. Note the markedly increasedneointimal growth in the apoE⫺/⫺ mice fed a WD compared withthe FD or CD mice, *P⬍0.05. Also, note the significantly morerobust NI growth in the FD group vs the CD group, *P⬍0.05. B,Quantitative immunocytochemistry of macrophage infiltrationinto the wall of injured carotid arteries 4 weeks after denudationand 5 weeks on respective diets. Note the marked reduction inpercent area occupied by macrophages in the WD with rosigli-tazone group compared with the WD group, *P⬍0.05. In addi-tion, the FD and CD groups have significantly less macrophagestaining compared with the WD group. C, Smooth muscle cellstaining demonstrating significantly less staining in the FD groupcompared with the other groups, *P⬍0.05.
pared with the WD group (11 000⫾5000 ␮m2 versus31 000⫾6000 ␮m2, Pⱕ0.05, n⫽10 per group). Macrophagecontent in the injured vessel wall was significantly reducedby 52% in the WD group treated with rosiglitazone comparedwith WD alone (9.5⫾2% versus 20⫾4%, Pⱕ0.05, Figure3B). Fewer macrophages were seen in the FD and chow Figure 5. Macrophage content. Representative immunostaining
groups compared with the WD group (5.5⫾2% and 1⫾0.8%, for macrophages using the F4/80 anti-mouse macrophage mAbfrom a mouse fed a WD (A), a mouse fed a WD with rosiglita- Pⱕ0.05, Figure 3B). There was also significantly less stain- zone (B), a mouse fed a FD (C), and a mouse fed CD (D). Mag- ing for smooth muscle cells in the FD group compared with nification ⫻200. 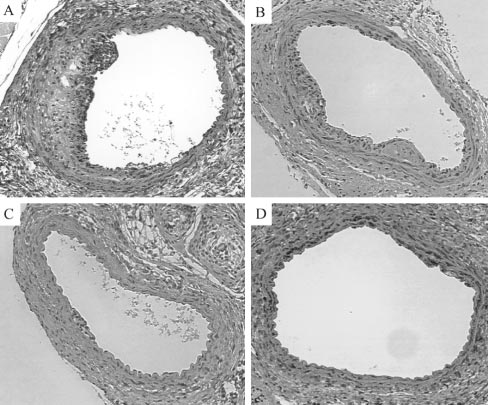 Sugar: spinning a web of influence

BMJ 2015;350:h231 doi: 10.1136/bmj.h231 (Published 11 February 2015) Sugar: spinning a web of influence Public health scientists are involved with the food companies being blamed for the obesity crisis,reports Jonathan Gornall Jonathan Gornall freelance journalist, Suffolk, UK An investigation by The BMJ has uncovered evidence of the