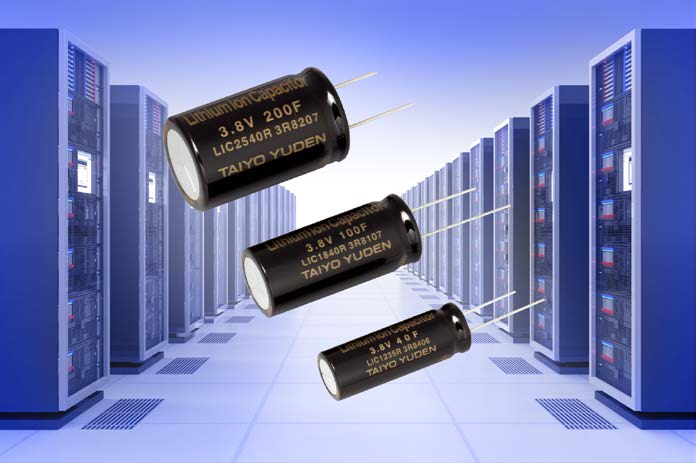 
EDLCs were first created in Japan in the 1970s and began appearing in various home appliances
in the 1990s. Since the 2000s, they have been used in mobile phones and digital cameras. EDLCs
are typically used to protect against sudden momentary drops or sudden interruptions in power.
They can instantaneously output large amounts of power, while a battery cannot. They are
frequently used as backup power sources in servers and storage devices for integrated circuits,
processors, memory and more.
While EDLCs are intended to be backup power sources, conventional EDLCs suffer from a
phenomenon known as self-discharge, where the capacitor will gradually lose its charge over
time. Self-discharge can occur more rapidly during exposure to high temperature environments.
The extremely low self-discharge of an Lithium Ion Capacitor, even in high heat
environments, ensures a long-lasting charge.

The use of Lithium Ion Capacitors is steadily growing. They are increasingly relied on as
supplementary power sources in manufacturing and medical equipment, where even momentary
drops in voltage can be critical. They serve to compensate for uneven voltage levels with solar
panels and even as primary power sources in small devices. Most significantly, Lithium Ion
Capacitors are becoming a preferred backup solution for power interruption in servers and other
devices.

Principles and Features of Lithium Ion Capacitors as Compared to
EDLCs 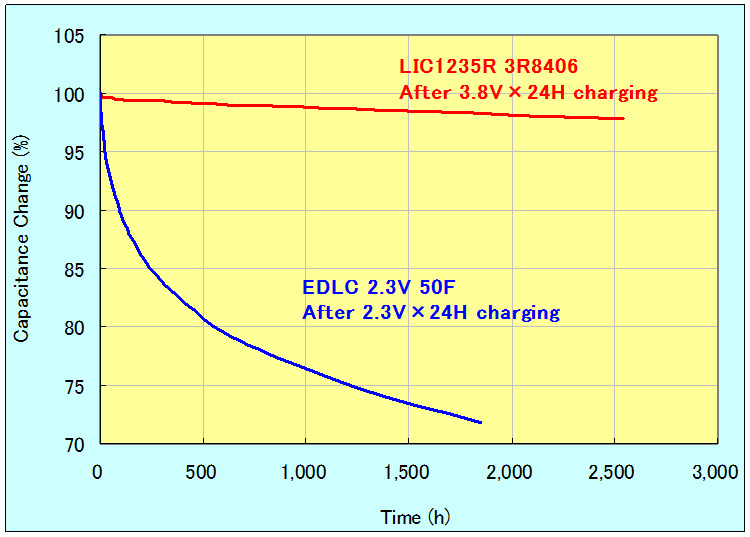 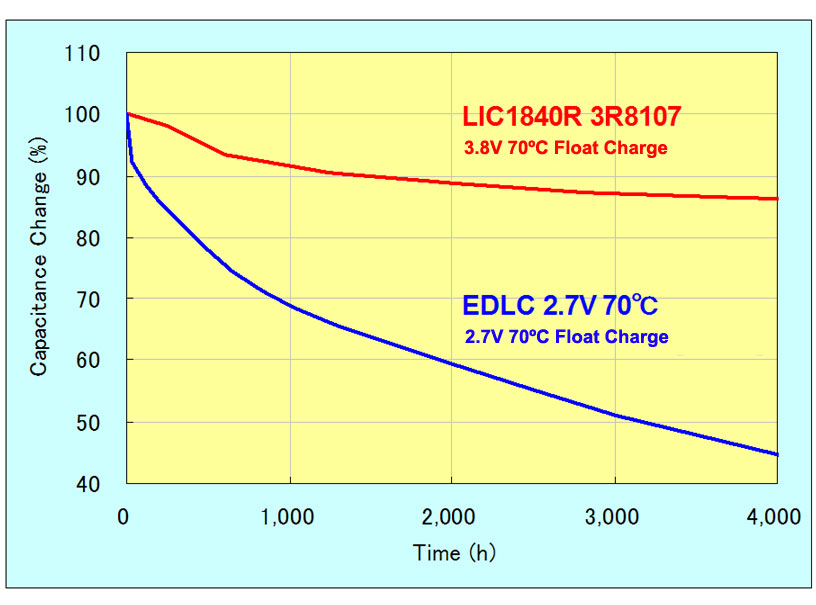 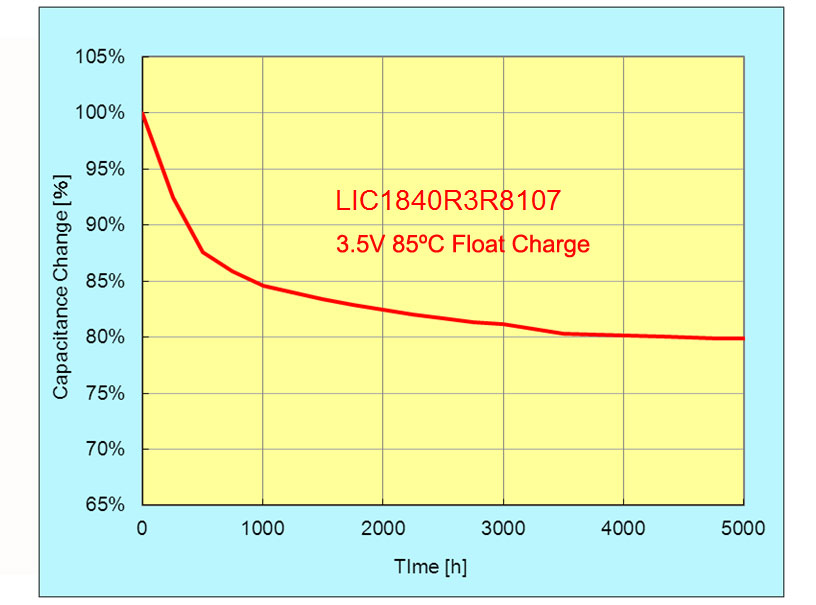 A stable discharge is obtained even at high temperatures and a volume-maintenance rate of over
60% is achieved even at a low temperature of -20ºC. In addition, a strong volume-maintenance
rate of about 50% is achieved at extremely low temperatures, even when affected by the voltage
drop caused by lesser mobility of ions in the electrolytic solution. With that, it is clear that the
Lithium Ion Capacitor has good temperature characteristics.
5. High Energy Density
The maximum voltage of Lithium Ion Capacitors, 3.8 V, is higher than that of a symmetric
type EDLC, and the capacitance is twice that of the EDLC. Therefore, the energy density of
Lithium Ion Capacitor is quadruple that of the EDLC, based on the formula of
"Q=1/CV2".

6. Space Savings
Thanks to its high energy density, multiple EDLCs can be replaced with one Lithium Ion
Capacitor. In applications such as servers and integrated circuits that use dozens of EDLCs, this
can result in significant space savings allowing for an overall reduction in space or more space
between each component. Utilizing fewer capacitors also helps improve thermal design by
reducing the number of heat generating components.
Safety of Lithium Ion Capacitor
Using a carbon-based material doped by Lithium Ions at the negative electrode may create
concerns about the safety, similar to Lithium Ion Batteries (LIB). However, the material
composition of their positive electrodes are very different: LIB uses metal oxide and Lithium Ion
Capacitor uses carbon-based materials such as activated carbon, which does not contain oxygen.
This differentiates their reactions when an internal short-circuit occurs.
In LIBs, when an internal short-circuit occurs, the temperature of the internal cell rises by the
short-circuit current. A following reaction between the negative electrode and the electrolytic
solution causes an increase in the pressure of the internal cell, followed by a collapse of the
crystal at the positive electrode and a release of oxygen in oxidation products of the positive
electrode. This causes another thermal runaway, and, in some cases, an ignition or an explosion
might occur due to a further rise in pressure of the internal cell and vaporization of the
electrolytic solution. 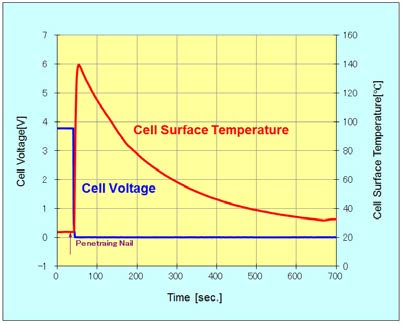 In contrast, the internal pressure of the cell also rises in Lithium Ion Capacitors, but after that, thanks to the difference of the materials in the positive electrodes, the thermal runaway phenomenon will not occur and the reaction quietly finishes with the opening of the safety valves. Thus, Lithium Ion Capacitors will not cause any serious accidents such as fires or explosions by the thermal runaway even of an internal short-circuit or other accident occurs, thanks to the difference of the material of its positive electrode compared to LIBs. Lithium Ion Capacitor can be said to be as logically safe an energy device as conventional non-aqueous solvent based EDLCs. Below are the results of a nail penetration test to a cylinder type Lithium Ion Capacitor with 200F, assuming an actual internal short-circuit.
These results show that the Lithium Ion Capacitor is a safe device. Even if the temperature of an
external wall of the cell increases to 100ºC after short-circuiting, the temperature gradually
decreases and the cell does not cause serious problem such as major deformations or explosions.
With these results, Lithium Ion Capacitor is a good device equivalent to the symmetrical type
EDLC in safety, has a number of features such as that it does not cause the thermal runaway even
with rising internal cell temperatures, unlike LIBs, it does not contain any metal oxides as a
material of the positive electrode. In addition, if an internal short-circuit should occur, internal
short-circuits from an elution in base materials of the negative electrode are unlikely as the
potential of the negative electrode does not exceed the elution potential of Cu.
Lithium Ion Capacitor Applications
• Backup power source in servers and storage devices for integrated circuits, processors, memory and more. The Lithium Ion Capacitor is ideal for tight, high temperatures spaces, as it provides energy density up to 4 times that of EDLCs, superior heat performance characteristics, voltage maintenance over time and low deterioration of floating charge. • Power sources for small appliances, applying the quick rechargeable, lightweight, and low self-discharge features. • Energy devices combined with photovoltaic cells or wind power generators (such as raised markers, light-emitting load signs, street lights, small LED illuminations) • Auxiliary power devices for energy saving devices (such as rapid drum heating in copiers and on star-up for projectors) • Computerized devices for automobiles, such as idling-stop devices, drive recorders and Author Biography
Atsuya Sato is the field application engineering supervisor in TAIYO YUDEN's ECD (Electric
Chemical Device) Project of the New Business Planning Development Division. He has worked
in TAIYO YUDEN ENERGY DEVICE CO., LTD. (formerly Shoei Electronics Co., Ltd.) Osaka,
Japan office, where he oversaw business with European, Chinese and South Korean mobile phone
manufacturers. After company restructuring in 2010, Mr. Sato moved to TAIYO YUDEN Co.,
Ltd. ECD Project, and currently supports sales offices in Europe, the United Sates and Singapore.
About TAIYO YUDEN
Since its establishment in 1950, TAIYO YUDEN has invested in research and development to
offer leading-edge technology to capacitors, inductors, circuit products, Surface Acoustic Wave
(SAW)/Film Bulk Acoustic Resonator (FBAR) devices, energy devices and recording media
under the philosophy that the process of product commercialization starts with material
development. TAIYO YUDEN's extensive range of products demonstrates world-leading support
to development and progress in the information technology and electronics industries. The
company's North American affiliate, TAIYO YUDEN (U.S.A.) INC., operates sales and
engineering offices in Chicago IL, Boston MA, Dallas TX, Denver CO, San Diego CA, San Jose
CA, and Ontario, Canada.
For more information, please visit:

CONSUMER MEDICINE INFORMATION Ask your doctor or pharmacist if you have any • Any of the ingredients listed at the end of this leaflet. questions about why Chemmart® Thrush one dose + Some of the symptoms of an allergic reaction may cream has been recommended for you. Your doctor or pharmacist may have recommended Chemmart® Thrush one dose + cream for another reason.