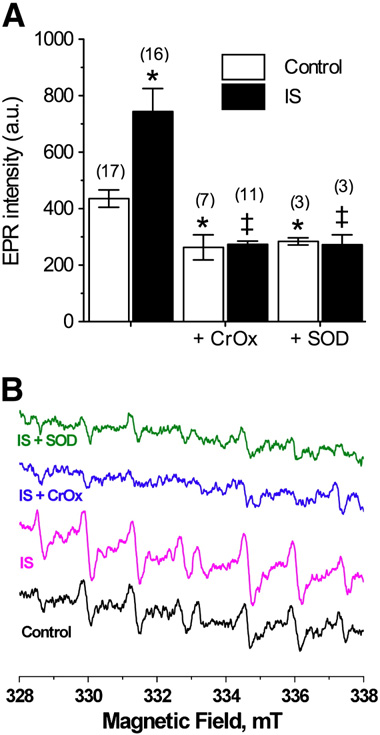 Fig. 1 – IS increases free radical production from neurons. (A)Summary of EPR-revealed changes in superoxide productionfrom neurons treated as indicated for 2 h. (B) Raw EPR traces Fig. 2 – DIDS or Apo prevents IS-mediated increase of ROS from (A). Parentheses ( ) indicate n values. Data are mean generation. (A) Summary of EPR-revealed changes in superoxide ± SEM. Asterisks (*) indicate significant difference from production from neurons treated as indicated for 2 h. (B) Raw control; double daggers indicate significant difference from EPR traces from (A). Parentheses ( ) indicate n values. Data are IS-alone (p < 0.05).
mean±SEM. Dashed and dotted lines indicate normoxic andIS controls from A, respectively. Asterisks (*) indicatesignificant difference from control A); double daggers normoxic DIDS-treated neurons. Therefore during ischemia, indicate significant difference from IS-alone p<0.05).
and with anion channels blocked, ROS accumulate in the cy-tosol. Similarly, the general Nox inhibitor apocynin (Apo:10 μM) reduced the IS-mediated increase in ROS generationto control levels (420.0 ± 27.7, F(2,23) = 3.6, and B), while Nox inhibition or ROS scavenging provide moderate co-treatment of DIDS with Apo did not further reduce ROS neuroprotection against ischemic insult (362.0 ± 72.0).
Next, we assessed the effects of IS ± DIDS ± Apo on neuronal vi- DIDS does not permeate intact neurons ability. Relative to experimental onset (t = 0 h), control cellsmaintained >85% of their [ATP] through 24 h; whereas [ATP] DIDS blocks ROS transmission across multiple lipid mem- dropped progressively to 89.2 ± 0.1, 34.0 ± 3.5, and 3.9 ± 2.0% fol- lowing 2-, 12-, and 24-h IS-treatment, respectively ( therefore, to assess the penetration of DIDS into neurons, n = 8–10 for each treatment). DIDS did not preserve [ATP] in we employed 2-photon confocal microscopy and took advan- IS-treated neurons at 24 h (n = 10 for each), likely due tage of the natural fluorescence of DIDS molecules to secondary intracellular actions of DIDS on cells with dam- In control experiments DIDS did not permeate aged membranes at this time-point (However, another plasma membranes through 2 h (n = 4 for each), general Cl− channel antagonist, 5-nitro-1-(3-phenylpropyla- whereas in IS, DIDS fluorescence was observed in some mino)benzoic acid (NPPB, 100 μM) increased [ATP] 3-fold rela- cells. To determine whether this penetration was due to tive to IS-alone and decreased IS-mediated PI uptake 18.8% membrane degradation, we also measured propidium iodide B and C and D, n = 16 for each). Similarly, Apo or the (PI) uptake. At 2 h, 15% of neurons took up PI, and this up- ROS scavenger NAC had minimal effects on [ATP] in control take coincided with cellular DIDS fluorescence ( experiments, but in ischemia increased [ATP] 7- and 10-fold, n = 10–20 for each). Therefore, the accumulation of DIDS in respectively, and ameliorated 25.7 ± 3.2 and 56.1 ± 4.5% of IS- some cells at 2 h is due to membrane degradation, and mediated PI uptake relative to IS-alone –D, n = 3–10 for DIDS-mediated inhibition of ROS production from intact each [NAC]). When ischemic neurons were treated with both cells at this time-point is likely due to extracellular actions Apo and NAC simultaneously, their neuroprotective effects were not additive. 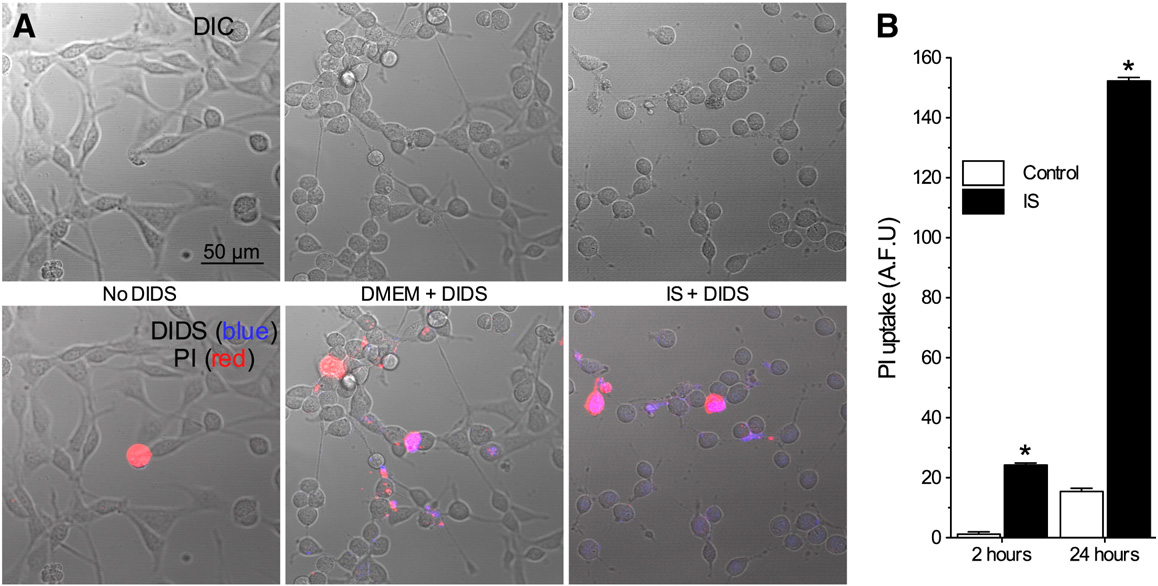 Fig. 3 – DIDS penetrates damaged, but not intact neuronal membranes. (A) Two-photon confocal DIC and Z-stack projection images(2 microns total) of neurons treated without DIDS, or with DIDS during normoxia or IS. Upper panel: DIC images. Lower panel:DIC images (grey) overlaid with PI (red) and DIDS (blue) fluorescent Z-stack projection images. Images are representative of 4separate experiments for each treatment. (B) Summary of PI uptake. Data are mean ± SEM from 10–20 replicates per treatment.
Asterisks (*) indicate significant difference from control (p < 0.05).
Ischemic solution induces mixed modes of cell death in this increase was abolished by co-treatment with Z-VAD-FMK B and C, n = 3).
Finally, since glutamate receptor activation and associated In the infarct core, cell death proceeds primarily via necrosis Ca2+ influx has been linked to ROS and reactive nitrogen spe- due to excitotoxicity, mediated by over-activation of excitatory cies production we examined the effect of AMPAR and NMDAR inhibition on ROS production. In nor- panoic acid and N-methyl-D-aspartic acid receptors (AMPARs, moxia, application of CNQX + APV (50 μM each) increased NMDARs) (Conversely, in the penum- ROS generation 14% from 466.5 ± 34.2 to 545.0 ± 28.7 at 2 h, bra, cell death is thought to occur via a mixture of cell death mo- while during IS-perfusion, CNQX + APV similarly increased dalities, including necrosis, apoptosis, and autophagy ROS generation 23%, from 655.2 ± 18.2 to 854.2 ± 48.1 (a.u., In our 2-photon experi- n = 4 for each).
ments, we observed moderate vital dye uptake at 2 h and B), consistent with the occurrence of rapid necrosis insome cells treated with this mimic solution. Therefore, we next examined the role of necrotic cell death in the IS modelby antagonizing AMPARs and NMDARs with 6-cyano-7-nitro- We demonstrate that deleterious ROS generation is increased quinioxaline-2,3-dione (CNQX) and (2R)-amino-5-phosphono- in hippocampal neurons treated with an in vitro ischemic pen- valeric acid (APV), respectively; and also of apoptosis using the umbral mimic perfusate, and that this increase is primarily due to efflux of Nox-derived ROS via plasma membrane anion channels. This conclusion is supported by our observations In vital dye exclusion assays, none of these treatments that anion channel or Nox antagonism, or ROS scavenging, had a significant effect on cell viability during control ex- each: (1) prevent IS-mediated increases in ROS generation, periments, whereas during IS-treatment, higher concentra- and (2) partially ameliorate IS-mediated neurotoxicity, in non- tions of CNQX + APV (50 μM each) reduced PI uptake 20%, additive manners. In neurons, Nox subunits are found at vari- Z-VAD-FMK (5 or 50 μM) ameliorated approximately one- ous lumen membranes, and following prolonged ischemia, third of IS-mediated PI uptake at 24 h (n = 16–32 for are translocated to plasma, mitochondrial, and endoplasmic each). To confirm the occurrence of apoptosis in this model, reticulum membranes ), and therefore contrib- we next examined the expression of Lamin A, a commonly ute to both cytosolic and extracellular ROS generation. Our re- studied marker of apoptosis whose cleavage is indicative of cas- sults suggest a predominant role for cytosolic Nox-derived pase 6 activation ). In Western blot ROS production in the penumbra since co-antagonism of analysis of Lamin A expression, we observed that IS treatment anion channels and Nox did not reduce EPR spectra beyond ei- (6 h) increased Lamin A 15-fold relative to controls, and that ther treatment alone, as would be expected if ROS were 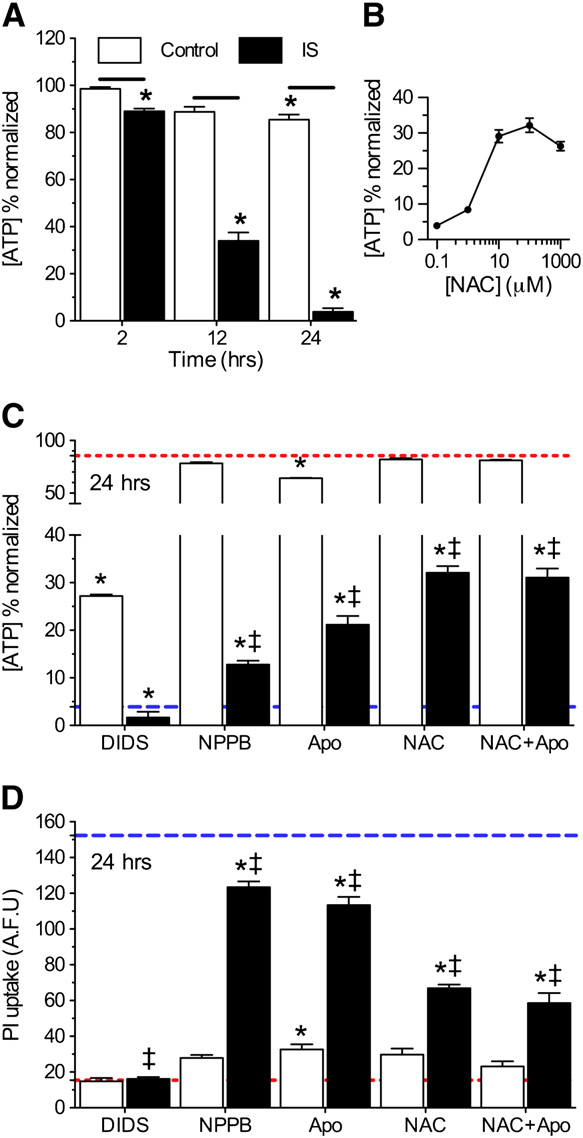 ROS generation from penumbral neurons cannot presently be measured in vivo because tracers do not reach the ischemictissue (however, our results are consistentwith ex vivo measurements from mouse brain followingMCAO, where Nox-mediated O•2 production was increased inthe penumbral region, but not in the core ).
Furthermore, our data are also consistent with measurementsfrom penumbral epithelial cells and arteries in brain in whichROS production increases markedly during ischemia via aNox-dependant mechanism Conversely, ROS production does not increase in ische-mic core arteries. These results from three penumbral tissuesfurther demonstrate that the profile of ROS generation in thepenumbral region is markedly different from the infarctcore, and in particular support a dominant contribution fromNox. Based on our present findings and these recent examina-tions, we conclude that Nox-mediated O•2 production is a keyregulator of deleterious ROS signaling in the penumbral re-gion, and that neuronal Nox contribute to this mechanism.
In the penumbra, oxidative phosphorylation persists due to a steady, albeit restricted supply of oxygen. This persistentreduced level of oxygen availability likely partially preservescells' ability to generate ATP, and thus opposes excitotoxic de-polarization and early rapid necrotic cell death (). However, this temporary preservation of ATP pro-duction allows for the induction of apoptosis and autophagyduring prolonged insult ), as occurs in thepenumbra. As a result, a variety of cell death mechanisms ap-pear to be concomitantly activated in this model present report), and this ex-plains why cell viability was only partially preserved in our ex-periments by ROS scavenging, or by glutamate receptor orcaspase antagonism.
In conclusion, we have used the present gold standard for free radical measurements (EPR), to record ROS productionfrom live neurons treated with a novel ischemic penumbralmimic perfusate for the first time. We conclude that: (1) neu- Fig. 4 – Nox inhibition or ROS scavenging is moderately protective ronal ROS production is increased during IS and this increase against prolonged ischemic insult. (A) Summary of [ATP] is manifested extracellularly, (2) this production is due to in- changes. (B) Dose–response curve of [ATP] vs. [NAC] at 24 h.
creased Nox-derived superoxide production, (3) the efflux of (C) Summary of [ATP] changes from neurons treated as Nox-derived superoxide occurs via anion channels, (4) Nox in- indicated for 24 h. Red and blue dashed lines represent hibition provides mild protection against IS insult in neurons, baseline and ischemic controls, respectively, from Fig. 4A. (D) and (5) neuronal cell death is mediated by a variety of path- Summary of PI uptake by neurons treated as indicated for 24 h.
ways during IS insult.
Red and blue dashed lines represent baseline and ischemiccontrols, respectively, from B. Data are mean ± SEM from8 to 10 replicates per treatment. Asterisks (*) indicate Experimental Procedures significant difference from control (Fig. 4A); double daggersindicate significant difference from IS (Fig. 4A; p < 0.05).
HT22 mouse hippocampal neurons (a generous gift from Dr.
Pam Maher, The Salk Institute, La Jolla, CA) were cultured produced by plasma membrane-bound Nox. Therefore, unlike in Dulbecco's Modified Eagle Medium (DMEM, ATCC) sup- in anoxic infarct core cells where ROS production is low during plemented with 10% bovine calf serum (Hyclone, Santa ischemia and cytotoxicity is predominately mediated by a del- Clara, CA) and 100 U/ml penicillin/streptomycin (Invitrogen, eterious burst of ROS during reperfusion Carlsbad, CA) and grown at 37 °C in a 5% CO2 incubator.
hypoperfused penumbral neurons maintain elevation of the Cells were grown for 5–8 passages and split when they generation, efflux, and extracellular accumulation of ROS, reached 60–80% confluence. For experiments, cells were which are known to contribute to the spread of cell injury and seeded into 96-well microplates (Corning, Lowell, MA), death in the penumbra ).
glass-bottom 35-mm culture dishes (MatTek, Ashland, MA),

Controls and features Seating and safety restraints Starting and driving Maintenance and care Capacities and specifications Reporting safety defects All rights reserved. Reproduction by any means, electronic or mechanical includingphotocopying, recording or by any information storage and retrieval system or translationin whole or part is not permitted without written authorization from Ford Motor Company.Ford may change the contents without notice and without incurring obligation.