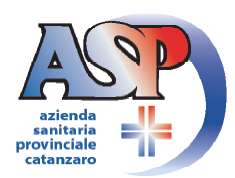 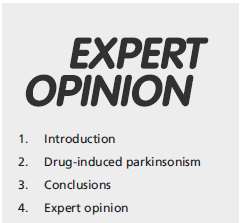 Drug-induced parkinsonism (DIP) was recognized in the early 1950s as a commoncomplication of antipsychotic therapy; initially considered to be present in 4 - 40%of patients treated with the first neuroleptics Reported as a complication of treatments with diverse compounds including newgeneration antipsychotics, CCB, gastrointestinal prokinetics, antiarrhythmics,antidepressants and others Reversible after drug suppression
Persistency of the clinical deficits after culprit withdrawal may indicate a
previous subclinical parkinsonism unmasked by the involved drugs

Two groups of DIP patients: those with normal SPECT (suggesting normal densityof dopamine terminals) and patients with reduced striatal uptake (suggestive oflesion of the presynaptic dopamine terminals) Some individuals, perhaps with genetic variants of genes involved in familialParkinson's disease (PD), are especially susceptible to this complication Key points
• Despite advances in ancillary tests, the clinical course of parkinsonism after drug discontinuation is paramount for a correct differential diagnosis.
• Management of DIP includes prevention, early recognition and withdrawal
of the offending drug.
• Certain variables such as age, use of multiple drugs or previous vascular
damage to the nigrostriatal pathway increase the risk of DIP. However, DIP
susceptibility is highly variable and unpredictable among different subjects.
• DIP is the second cause of parkinsonism but is still perceived as a neglected
pathology on the day-to-day clinics by most of the studies • Population studies have detected incidences of DIP among the 50 -- 99 years age group of 22.94 per 100,000 person-years • In the USA estimation of 20,000 -- 25,000 incident cases of DIP
• Another study focused on an elderly population of 64 years or older patients estimated the prevalence of DIP to be 3.3%,representing a 37% of all cases of parkinsonism • DIP as the second cause of parkinsonism after iPD with a
prevalence of 20 -- 56%
• Antipsychotics are the prototypical and most common compounds producing DIP • Akinetic rigid syndrome • Type of causative drug• Age of the patient• Length of exposure • Dose • Asymmetry is less characteristic of DIP although it may happen. • In contrast with vascular parkinsonism, which severely involves the legs and produces frequent impairment of gait, DIP produces a less severe gait disorder and a relatively more pronounced ‘masked' facial expression.
• The first symptom is a decrease in arm swing when walking, rather than a difficulty to rise from a low seat. The presence of tremor is variable.
• It is uncommon with drugs that selectively involve the dopamine neurotransmission, such as dopamine D2 blockers, and much more frequent with other compounds that act through a less selective mechanism, such as amiodarone or calcium channel blockers • Patients not achieving full recovery after a long period of time should be excluded from the diagnosis of ‘pure' DIP.
• There is evidence supporting that certain drugs can induce a persistent and even progressive parkinsonism.
• Lack of reversibility can also be explained considering that at least some patients with DIP are individuals in the presymptomatic phase of PD 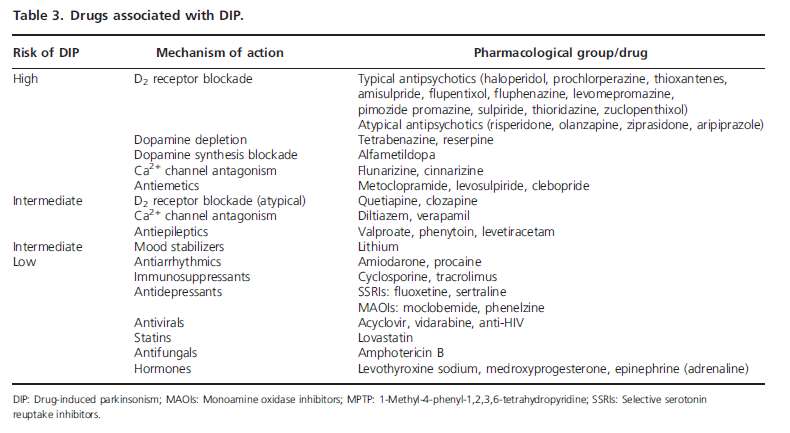 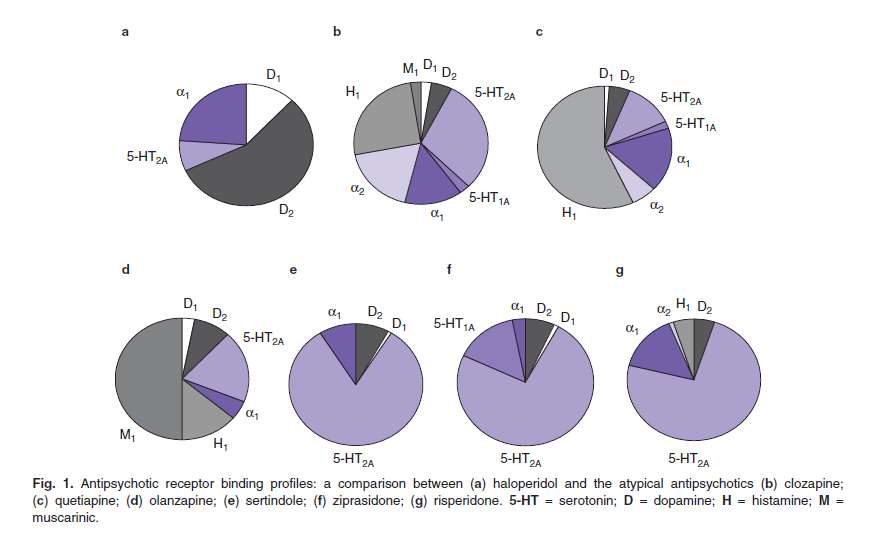 2 Muscarinic
D2 receptor occupancy(%)
Pathogenetic mechanisms (1)
• Diminished D2 receptor stimulation in the striatum• The pharmacological effect of antipsychotics are achieved with a blockade of a 60 -- 70% of the dopamine receptors and parkinsonism appears whenthe blockade reaches 75 -- 80% (occupancy not equal to antagonism) • Other compounds act by inhibiting uptake of dopamine into granular vesicles of presynaptic neurons. Monoamines are concentrated from thecytoplasm into vesicles by vesicular monoamine transporters (VMATs)(two isoforms).
• VMAT1 is located predominantly in peripheral endocrine and paracrine cells while VMAT2 is located in the brain and sympathetic neurons. TBZ
and reserpine bind to the same site on the VAMT2 but to different
conformations. While reserpine binds irreversibly being potentially toxic,
TBZ displays reversible binding.
Pathogenetic mechanisms (2)
• Certain calcium channel antagonists decrease neuronal activity, reduce monoamine neurotransmission and dopaminergic viability and reduce the
levels of HVA in the CSF of healthy primates suggesting that, even without
previous dopamine dysfunction, they can produce a calcium-dependent
reduction of dopamine release.
• Other compounds responsible for DIP may produce not only a reversible pharmacological impairment of dopamine neurotransmission, but alsoneurotoxic effects on dopamine neurons. Short-term blockade ofdopamine D2 receptors inhibits the production of neurotrophic substancesfor dopamine neurons, such as BDNF and stimulates the firing ofdopamine neurons increasing the metabolism of dopamine andproduction of free radicals.
Pathogenetic mechanisms (3)
• Treatment with haloperidol increases oxidative metabolism in the brain, reduces the phosphorylation of Akt and activates caspase-3 • Pharmacokinetic has explained interindividual differences in susceptibility to DIP by haloperidol variability related to CYP34A and the polymorphic CYP3A5 isoenzyme systems, which metabolize haloperidol to its pyridinium ion.
Compounds interacting with this system such as antidepressants may enhance toxicity related to the pyridinium ion in patients treated with haloperidol.
• Parkin knockout mice are more susceptible to the toxic effects of cinnarizine than wild-type controls.
• In parkin-deficient mice, cinnarizine produced changes in the metabolism of dopamine and increased the expression of proapoptotic proteins and reduced the proportion of astroglia and hyperactivated microglial cells, suggesting that in these genetically modified animals, cinnarizine selectively triggers the expression of neurotoxic factors that could produce an irreversible damage to the nigrostriatal dopamine system.
• Prevention: many patients with cognitive impairment or communication
disorders are given antipsychotics ‘larga manu' to cover lack of adequate behavioral stimulation, medical attention or to play a ‘calming effect' on medical problems such as pain, constipation or urinary retention, or for conditions unrelated to psychosis including insomnia, anxiety or depression • The second management strategy is to substitute certain compounds by a related drug with a better side-effect profile (i.e. domperidone).
• Clozapine is a useful agent for the treatment of drug-induced psychosis in PD, but it can also improve the clinical symptoms of DIP induced by other D2 • The third strategy would be to carefully monitor individuals with special risk factors for developing DIP. Senior individuals, those with family history of parkinsonism, dementia or tremor and those under treatment with multiple drugs are more prone to suffer DIP.
• The prognosis of complete recovery is uncertain and 10 -- 30% of the patients will continue to have symptoms several months after the discontinuation of the causative drug.
• At least 10% of patients will develop a persistent and progressive parkinsonian Certain variables such as age, previous vascular damage to the nigrostriatalpathway, treatment with multiple drugs and genetic variants have been identifiedas risk factors for the appearance of DIP, but we still lack the knowledge todetermine why some people are so resistant to astonishingly high doses ofdopamine blockers and others are incredibly sensible to lower doses of the sameagents.
Several mechanisms including a more antagonistic effect toward serotonin-2Areceptors than toward dopamine receptors, and a faster dissociation from D2 receptors explain the lower frequency of DIP with second- compared with first-generation antipsychotics The culprits have to be looked for and withdrawn if possible, second- and third-generation are preferred to first-generation antipsychotics, there is no evidencesupporting the use of levodopa, dopamine agonists or anticholinergics for thetreatment of DIP and gastrointestinal motility drugs not crossing the blood--brainbarrier (such as domperidone) are preferred to those with central effects.
Second-generation antipsychotics such as quetiapine are associated with very lowrates of DIP. Others, such as clozapine, have not been associated with DIP butentail a spectrum of undesirable side effects.
Grazie per la vostra

FOR CANCER By Harvey Kaltsas, D.O.M., A.P. Hyperthermia and Electrotherapy Janice wasn't flattered when the German shopkeeper congratulated her on the baby she looked about to deliver. For despite her severely swollen abdomen, Janice was not pregnant. She had advanced, multi-drug resistant peritoneal cancer with an accumulation of fluid in her abdominal cavity. Janice had been told she was in the end stages of an eight-year battle that had started with ovarian cancer and metastasized into liver, colon and bladder cancer.