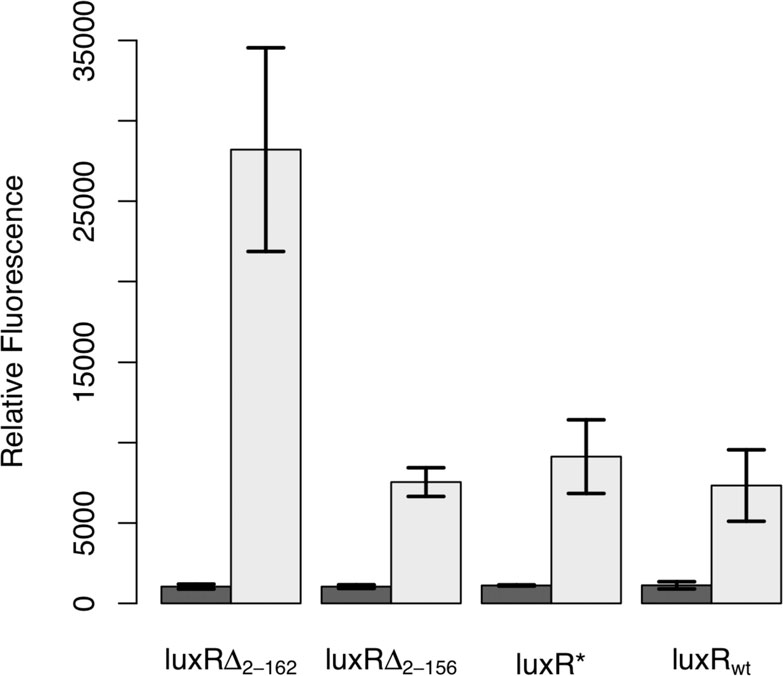 Nistala et al. Journal of Biological Engineering 2010, 4:4 exogenous inducer. However, a number of approaches relative to the wild-type control. Based on these results, exist for making constitutively active derivatives of LuxR we chose to use the LuxRΔ2-162 variant to design the and thus satisfying our design constraints. For example, an Ala221Val point mutation was previously found to To construct the amplifier, we cloned GFP and constitutively activate LuxR . The alanine at position LuxRΔ2-162 in a bicistronic configuration behind the 221 enables the N-terminal signaling domain to inhibit PluxI promoter on high-copy number plasmid (ColE1 the activity of the C-terminal, DNA-binding domain.
origin of replication). In this arrangement, LuxRΔ2-162 Presumably, mutating this residue to a valine prevents functions in a positive feedback loop as it can bind to the N-terminal domain from interfering with DNA the PluxI promoter and activate its own transcription binding. Consistent with this model, deleting the N- (Figure ). The reason we cloned LuxRΔ2-162 down- terminal domain of LuxR was also found to yield a con- stream of the GFP reporter is to control for polar effects stitutively active variant when we compared results involving positive feedback Based on these previous studies, we engineered three to those lacking it. To induce this circuit, we again used constitutively active variants of LuxR to test their suit- LuxRΔ2-162, this time as the input signal. In such a ability in designing an amplifier. The first, denoted by design, the output of the sensor is LuxRΔ2-162, which in LuxR*, harbors the Ala221Val point mutation. The turn feeds back into the amplifier. In these regards, other two, denoted by LuxRΔ2-156 and LuxRΔ2-162 LuxRΔ2-162 is used both as the input and positive feed- respectively, involved different N-terminal deletions, back signal. For the output, we used GFP as it provides where the subscript denotes the deleted fragment. To a facile measure of transcriptional activity. This choice test the relative effectiveness of these three different is in no way limiting, and any gene can in practice be constitutive LuxR variants, we determined how strongly used as the output.
they could activate expression from the PluxI promoter,using the green fluorescent protein (GFP) as our tran- Validation of amplifier using a tetracycline sensor scriptional readout. The results from these experiments We first tested the amplifier by coupling it to a one- are shown in Figure All of the LuxR variants, includ- component tetracycline sensor (Figure ). In this design, ing the wild-type control, were able to induce expression we cloned LuxRΔ2-162 behind the TetR-regulated PLtetO-1 from the PluxI promoter. Of the three, only LuxRΔ2-162 promoter on a compatible, medium copy-number plas- was capable in our hands of enhancing transcription mid (p15A origin of replication) In the absence ofthe tetracycline analogue, anhydrotetracycline (aTc),dimeric TetR binds to the O2 operator sites within thePLtetO-1 promoter and represses transcription. However,when TetR is bound with aTc, it no longer binds andrepresses the PLtetO-1 promoter, enabling dose-depen-dent control of gene expression. Thus, the aTc-induciblepromoter functions as a one-component tetracyclinesensor with LuxRΔ2-162 as the output.
To couple this sensor with the amplifier, we trans- formed cells (GN100) constitutively expressing a Figure 2 Schematic of positive-feedback amplifier. The basic Figure 1 Comparison of constitutive LuxR variants. In these design for the amplifier consists of GFP and LuxRΔ2-162 arranged in experiments, LuxR was expressed from a tetracycline-inducible a bicistronic configuration under the control of the PluxI promoter.
promoter, PLtetO-1, in strain GN101, which harbors a chromosomal LuxRΔ2-162 functions in a positive feedback loop as it can bind to copy of tetR. Activity was determined by the ability of these the PluxI promoter and activate its own transcription. In our design, different variants to induce expression from the PluxI promoter, LuxRΔ2-162 is also used as the input signal for the amplifier. LuxRΔ2- using GFP as the readout, in the absence of any autoinducer. Dark 162, therefore, functions both as the input and positive feedback bars denote the uninduced case and light bars the induced case signal. GFP, the output signal, provides a measure of transcriptional (200 ng/mL aTc). Error bars denote 95% confidence intervals. 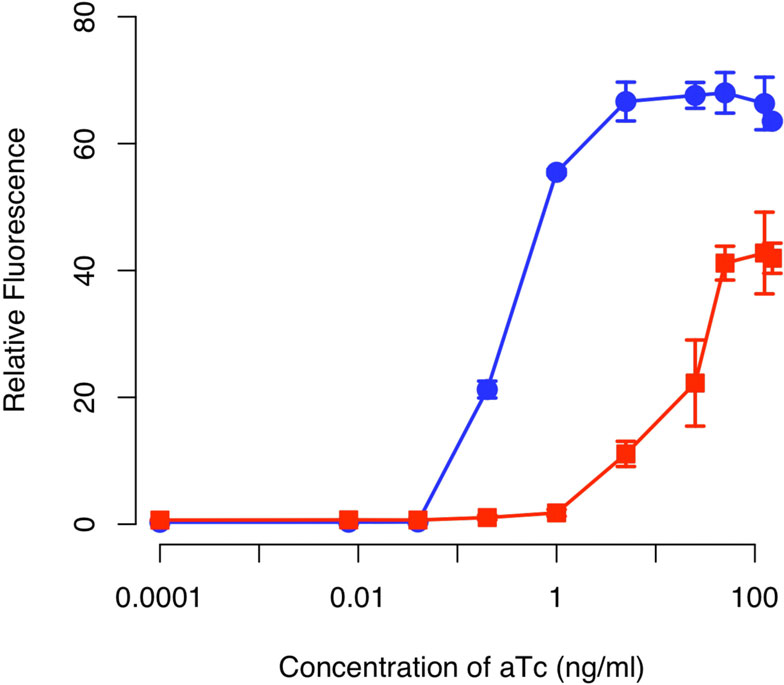 Nistala et al. Journal of Biological Engineering 2010, 4:4 Figure 3 Schematic of tetracycline sensor coupled to thepositive-feedback amplifier. The one-component tetracyclinesensor consists of a plasmid where LuxRΔ2-162 has been clonedbehind the TetR-regulated PLtetO-1 promoter. In the absence of theinducer anhydrotetracycline (aTc), dimeric TetR binds to the O2operator sites within the PLtetO-1 promoter and repressestranscription. However, when bound with aTc, TetR is no longerable to bind to the O2 operator sites within the promoter, thusenabling dose-dependent control of LuxRΔ2-162. This sensor wascoupled with the positive feedback amplifier, encoded on a Figure 4 Comparison of tetracycline sensor with positive separate plasmid, by transforming cells (GN100) constitutively feedback (solid circles) and without (solid square). Schematic of expressing a chromosomal copy of the tetR gene with the two positive feedback design is shown in Figure 3. The design lacking plasmids respectively harboring the sensor and amplifier.
positive feedback is otherwise identical to one with positivefeedback except that only GFP is expressed from the PluxI promoter.
In these experiments, cells were grown overnight at the indicated chromosomal copy of the tetR gene with the two plas- concentrations of aTc prior to measurements. The fluorescencevalues were normalized with the OD mids respectively harboring the sensor and amplifier 600 absorbance to account for cell density. Error bars denote 95% confidence intervals for the (see Materials and Methods for details). A schematic of the integrated design is given in Figure When wetested this design, we found that the amplifierincreased both the sensitivity and dynamic range of multiple studies have shown that positive feedback can the integrated circuit relative to an otherwise identical lead to bistability and hysteresis Therefore, we circuit lacking positive feedback (Figure ). In particu- speculated that cells harboring the amplifier might be lar, we found that positive feedback increased the sen- able to "remember" previous exposures to aTc. How- sitivity to aTc by roughly two orders of magnitude. In ever, when we transferred cells from media containing other words, we observed equivalent levels of expres- aTc to media lacking it, we no longer observed any sion in the circuit involving positive feedback at aTc GFP expression relative to the background after we concentrations roughly one hundred times less than grew the cells up (data not shown). These results indi- those observed with the circuit lacking positive feed- cate the positive feedback loop involving LuxRΔ2-162 is back. Moreover, we found that positive feedback able to amplify the response to an inducer but is increased the dynamic range by roughly 50%. By range, incapable of sustaining the response in the absence of we mean the ratio of expression under saturating indu- cing (100 ng/ml aTc) and non-inducing (0 ng/ml aTc) Based on what we know about the properties of LuxR, specifically the role of AHL in stabilizing LuxR, In addition to these endpoint measurements, we also the reason the circuit does not sustain activation is performed kinetic experiments where we measured the likely due to the protein dimer being degraded too response over a twelve-hour interval to varying concen- quickly. In other words, we suspect that LuxRΔ2-162 trations of aTc (Figure Consistent with our end- dimer is being degraded at a rate greater than it is point measurements, we found that the design involving being produced by positive feedback alone (though we positive feedback was more sensitive to aTc and had a did not directly make this measurement). More specifi- wider dynamic range of expression levels. Collectively, cally, positive feedback alone is unable to sustain the these results demonstrate that our genetic amplifier is expression of LuxRΔ2-162 in the absence of some exo- capable of both increasing the sensitivity and dynamic genous source, in our case the one-component sensor.
range of this one-component tetracycline sensor.
That said, the positive feedback is still strong enough We last tested whether the amplifier would endow to amplify the response when an external input signal the cell with memory. While not a design goal, 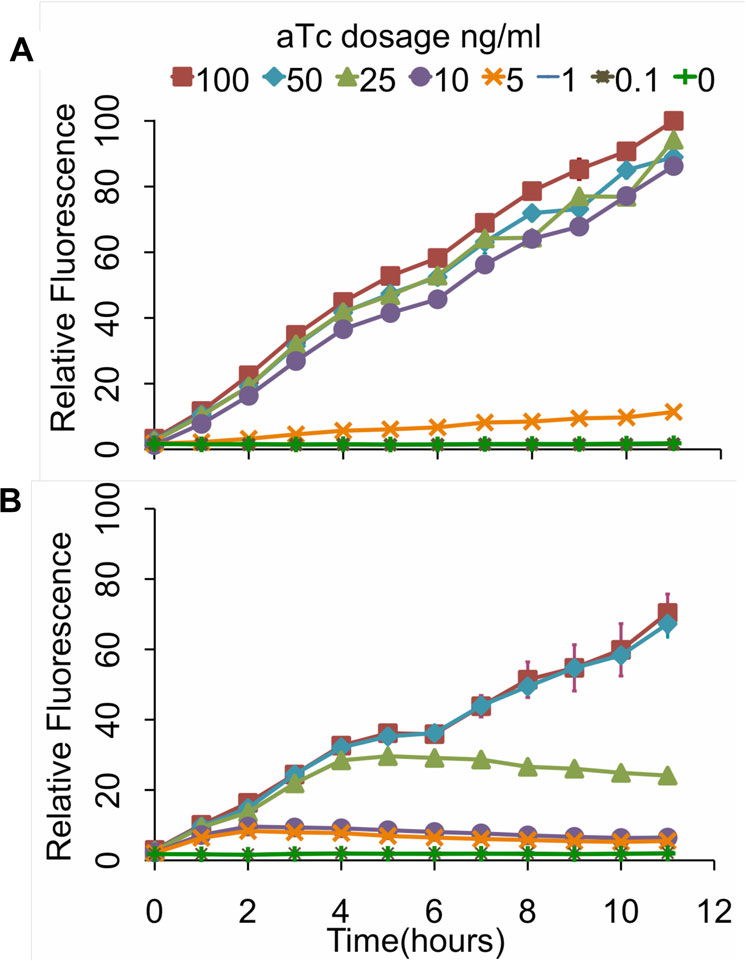 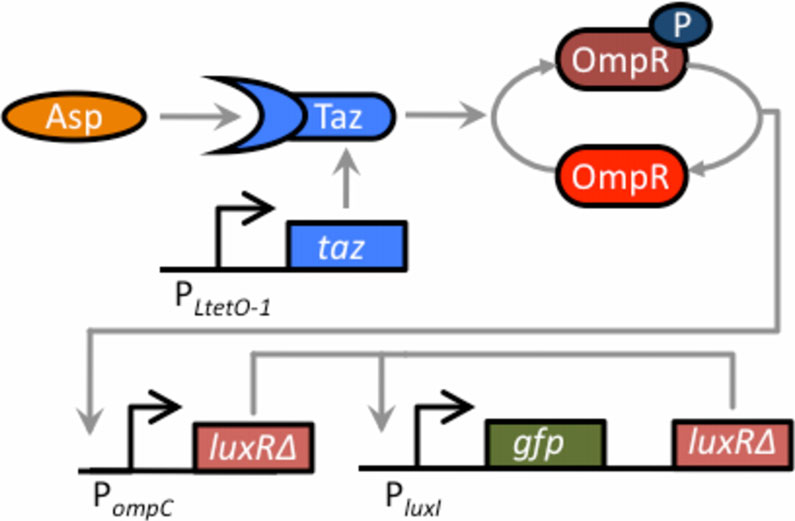 Nistala et al. Journal of Biological Engineering 2010, 4:4 Figure 6 Schematic of aspartate sensor coupled to thepositive-feedback amplifier. The two-component sensor consistsof the Taz sensor kinase and the OmpR response regulator. Tazcontrols the level of phosphorylated OmpR (OmpR-P), which in turnactivates the expression from the PompC promoter. When the Tazsensor kinase is bound with aspartate, it increases the levels ofOmpR-P, leading to increased expression from the PompC promoter.
In our design, the Taz sensor kinase has been cloned behind theconstitutive PLtetO-1 promoter on one plasmid (the cells used inthese experiments do not possess TetR). On a second plasmid,LuxRΔ2-162 has been cloned behind the PompC promoter, resulting inthe expression of LuxRΔ2-162 being aspartate dependent. The thirdplasmid harbors the positive feedback amplifier. The sensor was Figure 5 Kinetic analysis of tetracycline sensor with positive coupled to the amplifier by transforming the three plasmids into a feedback (A) and without (B). In these experiments, cells were ΔenvZ null mutant (GN101).
grown for 12 hours at varying levels of aTc induction withmeasurements taken every hour. The fluorescence values werenormalized with the OD600 absorbance to account for cell density.
The scale for both sets of experiments is the same. Error bars To construct the integrated circuit in E. coli, we trans- denote 95% confidence intervals for the measurement average.
formed a ΔenvZ null mutant (GN101) with these threeplasmids.
Similar to what we observed with the one-component Validation of amplifier using an aspartate sensor tetracycline receptor, we found that the amplifier We next tested the amplifier by coupling it to a two- increased both the range and sensitivity when coupled component aspartate sensor (Figure To do this, we to the two-component aspartate sensor as compared to used the hybrid Tar-EnvZ (Taz) sensor kinase [. This an otherwise identical circuit lacking positive feedback chimeric, transmembrane sensor kinase controls the (Figure Unlike the case with the one-component sen- levels of phosphorylated OmpR, which in turn activates sor, we observed only a minor increase in sensitivity.
the expression from the PompC promoter. When the Taz However, we observed a significant amplification of the sensor kinase is bound with aspartate, it increases the response. In particular, the amplifier increased the levels of OmpR-P, leading to increased expression from dynamic range by roughly an order of magnitude the PompC promoter. In addition to amino acids, EnvZ whereas the sensitivity increased by approximately a fac- chimeras have been constructed to sense other inputs tor of two. While these results demonstrate that the such as sugars and light amplifier is modular as it can readily be applied to dif- In order to couple the two-component aspartate sen- ferent sensor systems, they also demonstrate that the sor with our genetic amplifier, we cloned LuxRΔ2-162 performance of the amplifier is context dependent. In behind PompC promoter on a compatible, medium copy- particular, we observed mostly an increase in the range number plasmid (p15A origin of replication). To intro- when the amplifier was coupled to the two-component duce the Taz sensor kinase into E. coli, we cloned this aspartate sensor kinase and, conversely, mostly an gene behind the constitutive PLtetO-1 promoter on a increase in sensitivity when it was coupled to the one- compatible, low copy-number plasmid (pSC101 origin of component tetracycline sensor.
replication). Note, these experiments were performed in We note that we observed only weak activation, cells lacking a chromosomal copy of the tetR gene, so roughly two-fold, in response to aspartate in the absence the PLtetO-1 promoter in this background is constitutive.
of positive feedback. This level of activation is less than 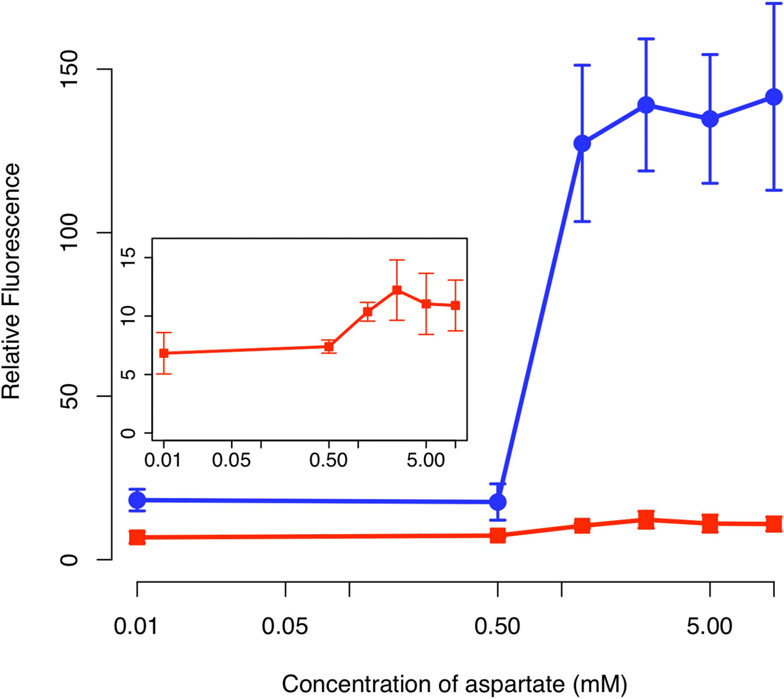 HIGHLIGHTS OF PRESCRIBING INFORMATION These highlights do not include all the information needed to use TIROSINT safely and effectively. • Patients unable to swallow a capsule, including young children (generally under 6 years of age) (4) See full prescribing information for TIROSINT. • Acute myocardial infarction (4) TIROSINT (levothyroxine sodium) capsules, for oral use