CASE REPORT
HUGE NODULAR GOITRE WITH RETROSTERNAL
EXTENSION- A rare case report
Raj Nagarkar1, Shirsendu Roy1, Mohammad Akheel2, Nayana Kulkarni3
1-Surgical oncologists 2-Senior Registrar, 3-Anesthetist, Dept of head & neck oncology services, HCG Curie Manavata cancer centre, Nashik, India. ABSTRACT:
Retrosternal goitre is very rare condition which account for 5 to 20 % of thyroidectomy patients. Though rare, it can be better managed surgically. In this article we report a rare case of 55 year old female who had nodular goiter with huge retrosternal extension associated with hyperthyroidism. Majority of retrosternal thyroid can be removed safely by conventional cervical approach. Our patient had around 12 x 8 x 7 cm mass which was impossible to remove it from conventional approach and hence total thyroidectomy by a combined cervical/sternotomy approach. Procedure was uneventful and patient is doing fine in 2 months of follow-up. The role of thyroidectomy in patients with retrosternal goitre provides yet another area of surgical controversy. KEYWORDS: Thyroid neoplasm, retrosternal goitre, sternotomy
Retrosternal goiter is defined when 50 % of the thyroid is below the thoracic inlet. This can also be called as intrathoracic goiter. Retrosternal goiter is a very rare condition which account for 5 to 20 % of thyroidectomy patients. Mediastinal extension is more common in huge goiters with a peak incidence in 5th to 6th decade. This is usually rare when the patient has associated hyperthyroidism which may increase the risk of complications. The reported incidence of goiters with thyroid malignancy is around 3 to 17 %. Retrosternal goitre occurs when the thyroid enlarges downwards into the chest. Although the great majority of retrosternal goitres are extensions from the neck, pure intrathoracic goitres are very rare. Retrosternal goitres are more likely to be left sided and very rarely a left sided cervical goitre 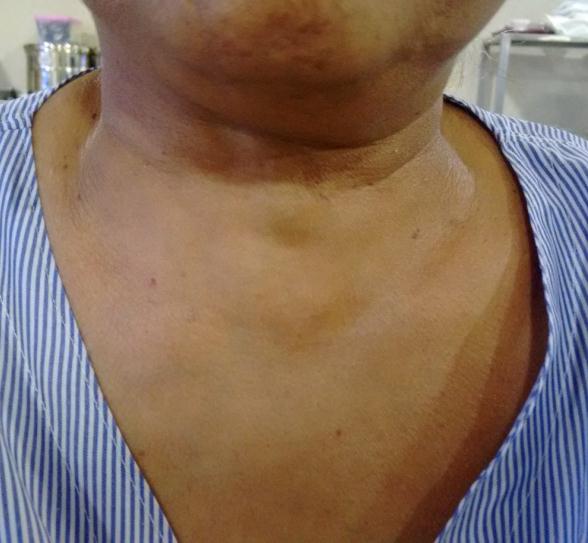 descends into the right side of the chest which is called a "crossed substernal goitre". With few exceptions huge goiters can be removed by cervical approach but less than 2 % patients require cervical/sternotomy approach. All these factors will influence the perioperative management of the patient. In this article we report a rare case of 55 year old female who had nodular goiter with huge retrosternal extension associated with hyperthyroidism. The tumor was removed surgically by a combined cervical/sternotomy approach. CASE REPORT:
A 55 year old reported to our cancer centre with a chief complaint of difficulty in breathing and eating from 2 years. General examination was insignificant. Local examination revealed a diffuse swelling of left lobe of thyroid (Fig 1). Her medical history revealed hyperthyroidism from 2 years. A provisional diagnosis of Thyroid swelling was made. Radiological examination was done. Computed tomography of neck revealed 12 x 8 x 7 cm retrosternal mass arising from left lobe of thyroid with tracheal compression (Fig 2). There was no cervical lymphadenopathy. Thyroid function test (T3, T4 and TSH) were done. T3 was 2.11 nmol/l, T4 was 228.86nmol/l and TSH was less than 0.06uIU/Ml. Fine needle aspiration of the lesion gave a final diagnosis of nodular colloid goitre with cystic changes. Since T4 was high, patient was started on Tab Neomarkazole 2.5mg, Tab Inderal 80 mg and Lugol Iodine solution orally for 10 days to avoid Thyrotoxicosis. After 5 days T3 was 0.98nmol/L, T4 was 180.36 nmol/L and TSH was less than 0.05 Uiu/Ml. Patient was taken FIG1: Diffuse swelling of left lobe of thyroid 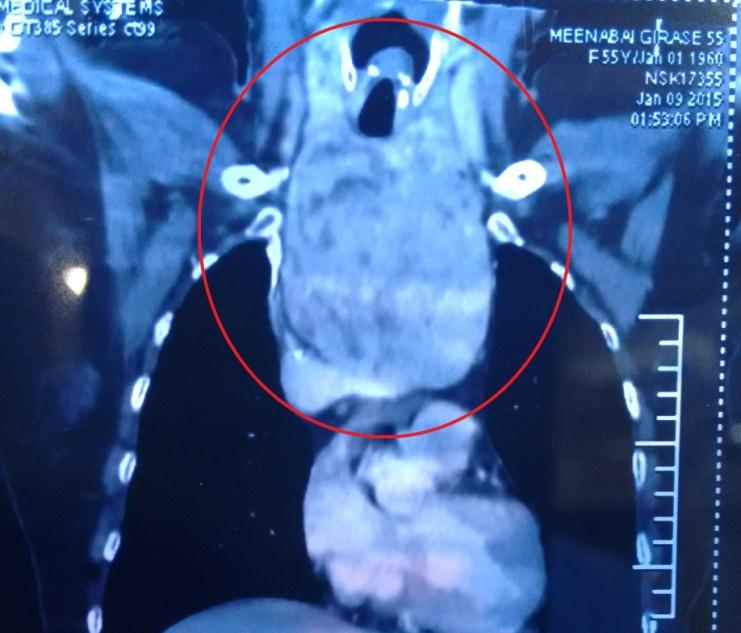 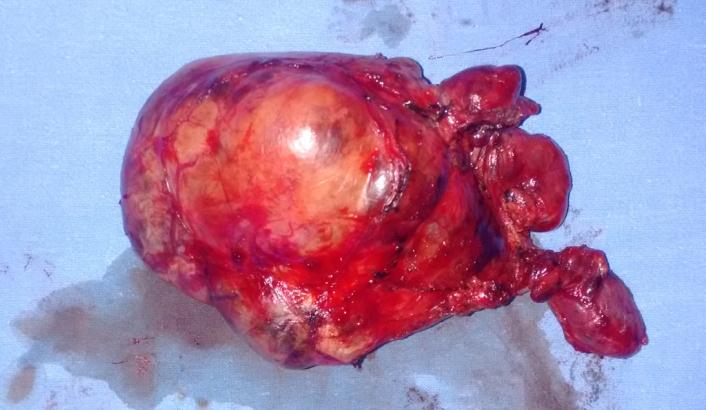 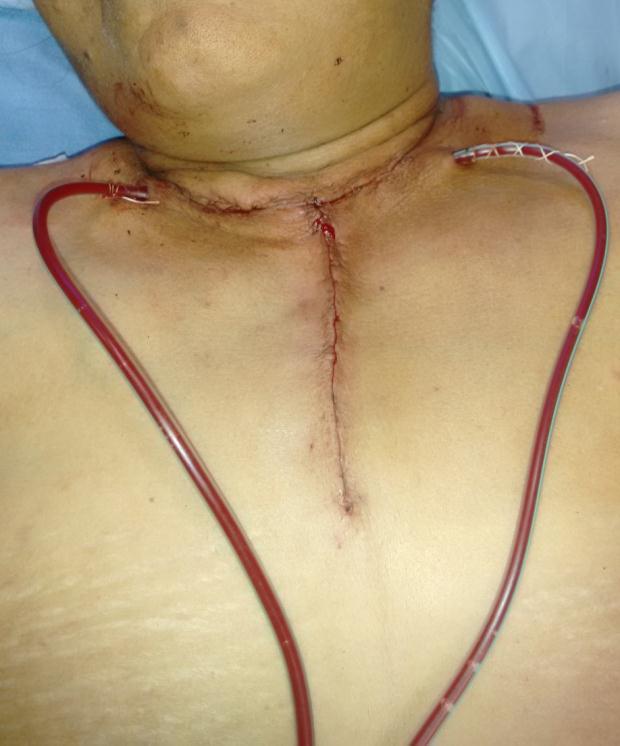