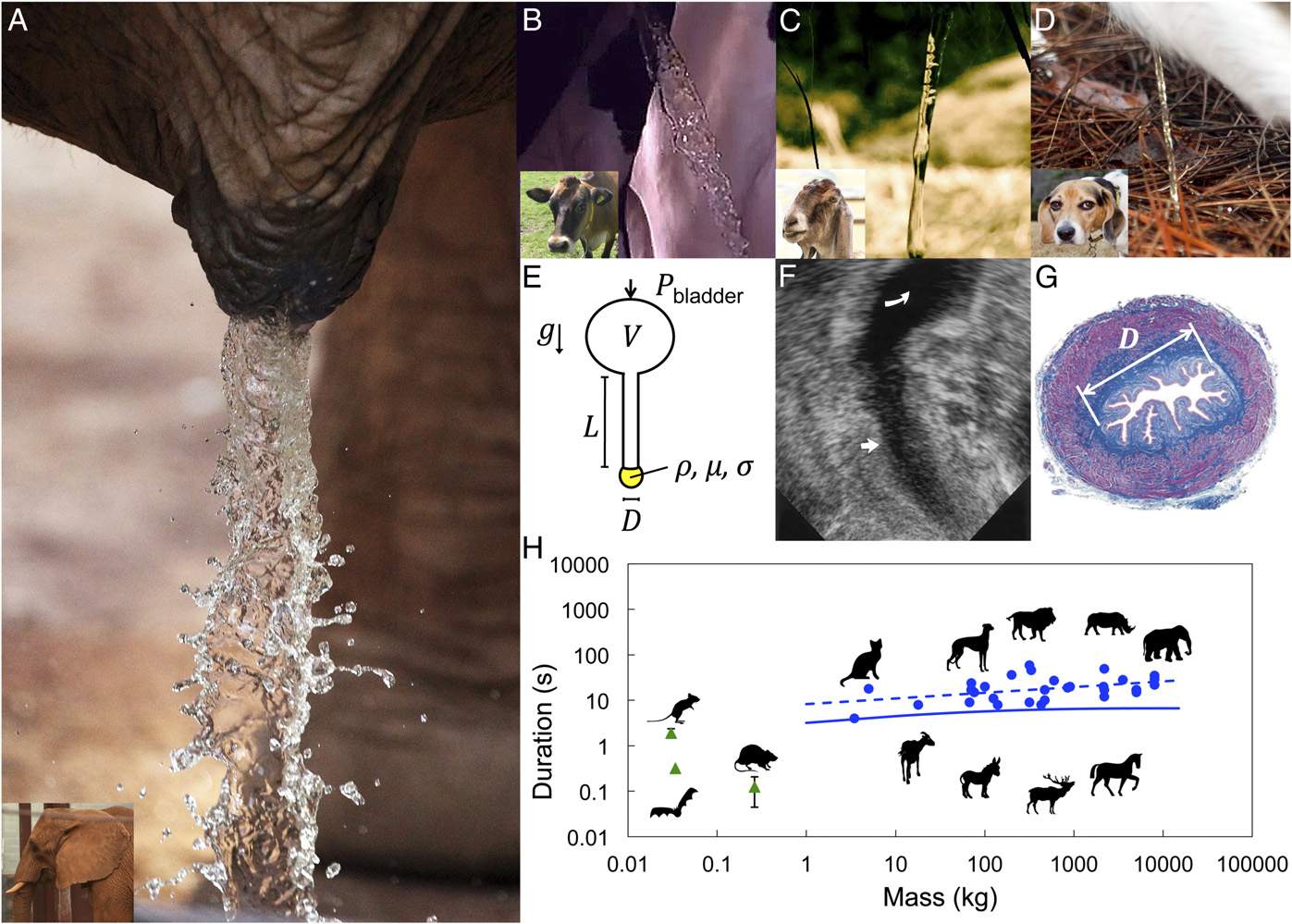 Jetting urination by large animals, including (A) elephant, (B) cow, (C) goat, and (D) dog. Inset of cow is reprinted from the public domain and cited in . (E) Schematic of the urinary system. (F) Ultrasound image of the bladder and urethra of a female human. The straight arrow indicates theurethra, and the curved arrow indicates the bladder. Reproduced with permission from ref. 20, (Copyright 2005, Radiological Society of North America). (G)Transverse histological sections of the urethra from a female pig. Reproduced with permission from ref. 9, (Copyright 2001, Elsevier). (H) The relationshipbetween body mass and urination time.
Table 1 shows the corresponding allometric relationships to be This shape factor is nearly constant across species and body used in numerical predictions for flow rate and urination time.
mass and consistent with the value of 0.17 found by Wheeler We begin by showing that the urinary system is isometric (i.e., et al. (55).
it has constant proportions across animal size). Fig. 3A shows Peak bladder pressure is difficult to measure in vivo, and in- the relation between body mass M and urethral dimensions stead, it is estimated using pressure transducers placed within the (length L and diameter D). As shown by the nearly parallel bladders of anesthetized animals. Pressure is measured when the trends for L and D (L = 35M0.43 and D = 2M0.39), the aspect bladder is filled to capacity by the injection of fluid. This tech- ratio of the urethra is 18. Moreover, the exponents are close to nique yields a nearly constant bladder pressure across animal the expected isometric scaling of M1/3. Fig. 3B shows the re- size: Pbladder = 5.2 ± 0.86 kPa (n = 8), which is shown in Fig. 3D.
lationship between body mass and bladder capacity. The bladder's The constancy of bladder pressure at 5.2 kPa is consistent with capacity is V ∼ M0.97, and the exponent of near unity indicates other systems in the body. One prominent example is the re- spiratory system, which generates pressures of 10 kPa for animals In ultrasonic imaging (Fig. 1F), the urethra appears circular spanning from a mosquito to an elephant (56).
(20). However, in histology (Fig. 1G), the urethra is clearlycorrugated, which decreases its cross-sectional area (9). The Steady-State Equation of Urine Flow. We model the flow as steady presence of such corrugation has been verified in studies in state and the urine as an incompressible fluid of density ρ, which flow is driven through the urethra (51, 52), although the viscosity μ, and surface tension σ. The energy equation re- precise shape has been too difficult to measure. We proceed lates the pressures involved, each of which has units of energy by using image analysis to measure cross-sectional area A per cross-sectional area of the urethra per unit length downthe urethra: from urethral histological diagrams of dead animals in theabsence of flow (9, 53, 54). We define a shape factor α = 4A/ πD2, which relates the urethral cross-sectional area with re- Pbladder + Pgravity = Pinertia + Pviscosity + Pcapillary: spect to that of a cylinder of diameter D. Fig. 3C shows theshape factor α = 0.2 ± 0.05 (n = 5) for which the corrected Each term in Eq. 1 may be written simply by considering the cross-sectional area is 20% of the original area considered.
pressure difference between the entrance and exit of the PNAS August 19, 2014 vol. 111 no. 33 11933 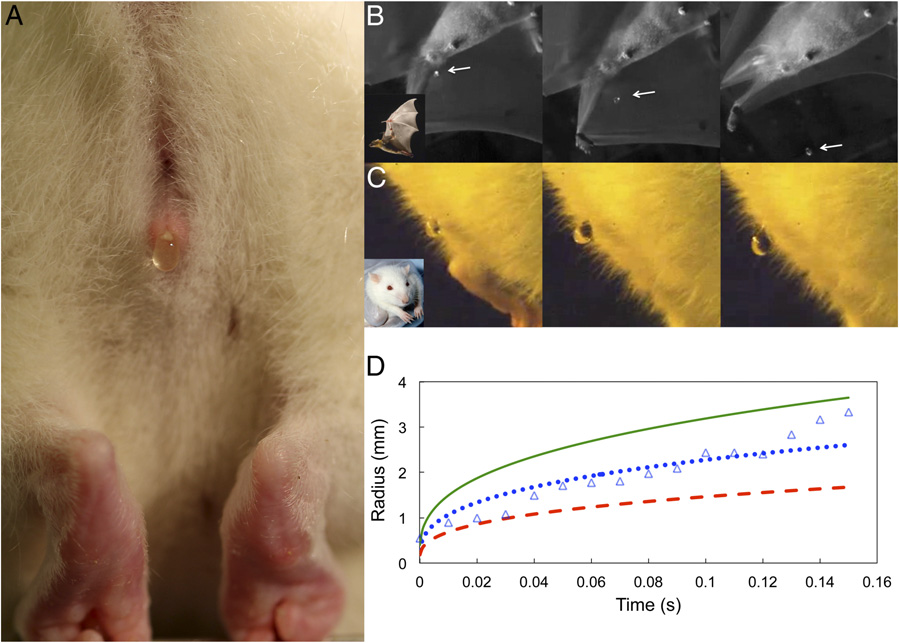 Dripping urination by small animals. (A) A rat's excreted urine drop. (B) A urine drop releasedby the lesser dog-faced fruit bat Cynopterus bra-chyotis. Courtesy of Kenny Breuer and SharonSwartz. (C) A rat's urine drop grows with time. Insetis reprinted from the public domain and cited in . (D) Time course of the drop radii of therat (triangles) along with prediction from our model(blue dotted line, α = 0.5; green solid line, α = 1; reddashed line, α = 0.2).
urethra. The combination of bladder and hydrostatic pressure our derivations here, however, we assume that the transient drives urine flow. Bladder pressure Pbladder is a constant given phase is negligible.
in Fig. 3D. We do not model the time-varying height in thebladder, because bladders vary greatly in shape (57). Thus, Large Animals Urinate for Constant Duration. Bladder pressure, hydrostatic pressure scales with urethral length: P gravity, and inertia are dominant for large animals, which can be gravity ∼ ρgL, where g is the acceleration of gravity. Dynamic pressure Pinertia shown by consideration of the dimensionless groups in scales as ρu2/2 and is associated with the inertia of the flow.
The viscous pressure drop in a long cylindrical pipe is given by the Darcy–Weisbach equation (58): Pviscosity = fD(Re)ρLu2/2αD.
αD as the effective diameter of the pipe to keep the cross- sectional area of the pipe consistent with experiments. TheDarcy friction factor f The urination time T, the time to completely empty the bladder, D is a function of the Reynolds number Re = ρuD/μ, such that f may be written as the ratio of bladder capacity to time-averaged D(Re) = 64/Re for laminar flow and flow rate, T = V/Q. We define the flow rate as Q = uA, where A = D(Re) = 0.316/Re1/4 for turbulent flow (104 < Re < 105). Drops generated from an orifice of effective diameter απD2/4 is the cross-sectional area of the urethra. Using Eq. 4 to a capillary force (59) of P substitute for flow speed yields αD. Substituting these terms into Eq. 1, we arrive at By isometry, bladder capacity V ∼ M and urethral length and The relative magnitudes of the five pressures enumerated in diameter both scale with M1/3; substitution of these scalings into Eq. 2 are prescribed by six dimensionless groups, including the Eq. 5 yields urination time T ∼ M1/6 ≈ M0.16 in the limit of in- aforementioned Reynolds number and Darcy friction factor creasing body mass. Agreement between predicted and mea- and well-known Froude Fr = u= gL and Bond Bo = ρgD2/σ sured scaling exponents is very good (0.13 compared with 0.16).
numbers (60) as well as dimensionless groups pertaining to the We, thus, conclude that our scaling has captured the observed urinary system, the urethra aspect ratio As = D/L, and pressure invariance in urination time.
ratio Pb = Pbladder/ρgL. Using these definitions, we nondimen- We go beyond a simple scaling by substituting the measured sionalize Eq. 2 to arrive at allometric relationships from Table 1 for L, D, α, V, and Pbladderinto Eq. 5, yielding a numerical prediction for urination time.
This prediction (Fig. 1H, solid line) is shown compared with ex- perimental values (Fig. 1H, dashed line). The general trend is captured quite well. We note that numerical values are under-predicted by a factor of three across animal masses, likely because In the following sections, we solve Eq. 3 in the limits of large and of the angle and cross-section of the urethra in vivo.
small animals.
How can an elephant empty its bladder as quickly as a cat? In we apply a variation of the Washburn law Larger animals have longer urethras and therefore, greater hy- (61) to show that the steady-state model given in Eq. 2 is drostatic pressure driving flow. Greater pressures lead to higher accurate for most animals. Animals lighter than 100 kg ach- flow rates, enabling the substantial bladders of larger animals to ieve 90% of their flow velocity within 4 s; however, for animals be emptied in the same duration as those of their much smaller such as elephants, the transient phase can be substantial. For

The Canadian Consensus Document on ME/CFS Our comparison study examined differences between patients meeting the Canadian clinicaland the Fukuda et al. criteria for ME/CFS, with people who had chronically fatiguing illnessexplained by a psychiatric condition. The Canadian Clinical Criteria selected patients with morephysical functional impairment, more fatigue/weakness, neurocognitive and neurologicalsymptoms and had more variables that significantly differentiated them from the psychiatriccomparison group than did the Fukuda et al. criteria. The findings do suggest that the Canadiancriteria point to the potential utility in designating post-exertional malaise and fatigue, sleepdysfunction, pain, clinical neurocognitive, and clinical autonomic/neuroimmunoendocrinesymptoms as major criteria.