W. Bender1M. Albus1H.-J. Möller2 Towards Systemic Theories in Biological Psychiatry Although still rather controversial, empirical data on the neuro- netics, informatics, computational neuroscience or systems sci- biology of schizophrenia have reached a degree of complexity ence. The methodology of systems science permits the modeling that makes it hard to obtain a coherent picture of the malfunc- of complex dynamic nonlinear systems. Such procedures might tions of the brain in schizophrenia. Theoretical neuropsychiatry help us to understand brain functions and the disorders and ac- should therefore use the tools of theoretical sciences like cyber- tions of psychiatric drugs better.
Empirical data and theoretical neuropsychiatry nity state etc. (Leuner and Müller, in this issue p. S15). For ªnatur-alisticº modeling, we do not know enough about the dynamics of Schizophrenia is a mental disorder for which therapeutic im- the dopamine system during sleep-wake cycles, either [42]. Final- provements in antipsychotic medications still are needed ly, the effects of new antipsychotic drugs like aripiprazole which [35,36,39]. Obviously the basic neurobiological mechanisms of acts as a partial dopamine agonist open up new questions with re- this disease are not understood sufficiently (Carlsson, in this is- gard to ªoptimizationº of dopaminergic transmission as basis of sue p. S10). On the other hand, in the last years a huge amount therapeutic effects in schizophrenia (Gründer et al., in this issue of data has been gathered by neurobiological research in the p. S21). These aspects have not yet been clarified by a consistent, form of animal experiments, clinical studies, imaging studies detailed and ªnaturalisticº biologically based theory of dopamine and other methods. Many details are still not clarified as for functions in schizophrenia. Any assumption like the hypothesis or instance it can be discussed controversially if a striatal theory of ªhyperactivity of dopamine transmissionº is a generali- hyperactivity or a prefrontal cortical hypoactivity of dopamine zation which is to some extent contradictory, but possibly not sig- transmission mechanisms is the primary causal mechanism of nificant. In spite of such inconsistencies and uncertainities on the schizophrenia [17,38]. One point of dissension is the conception empirical level, it seems useful to integrate current knowledge of of ªactivityº, as it can be understood as stimulus-bound ªreactiv- the mechanisms of schizophrenia (Emrich et al., in this issue p.
ityº of systems, i.e. their dynamic properties, and can mean tonic S52). Within this context, an enormous amount of information (sustained) and phasic (transient) activity [1,19]. Furthermore, must be compiled in order to construct a picture of this disease.
on the level of the molecular mechanisms of synaptic action, noconsistent picture can be drawn (Leuner and Müller, in this issuep. S15). One example is the question of the relevance of the local Philosophical aspects D1 : D2 ratio of receptors and their effects on local neuronal cir-cuits ([59]; Winterer, in this issue p. S68). The dopamine D 2 type From a philosophical point of view [6], we are in a position in receptors also demonstrate a high degree of diversity occurring which, pictorially speaking, we have broken the entire brain, as as a long and a short subtype, they also have presynaptic, extra- an operationally closed organ, down into it's molecular pieces, synaptic and postsynaptic locations, exert a high and a low affi- but now do not know how to put things together. It is hard to un- 1 District Hospital Haar, Haar, Germany 2 Psychiatric University Hospital, Munich, Germany PD Dr. Dr. Dr. Felix Tretter ´ District Hospital Haar ´ Ringstr. 9 ´ D-85529 Haar/Munich ´ Germany ´ Pharmacopsychiatry 2006; 39 Suppl 1: S4±S9  Georg Thieme Verlag KG Stuttgart ´ New York 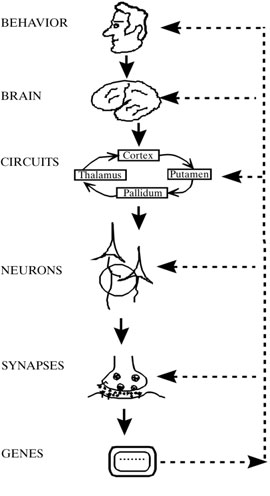 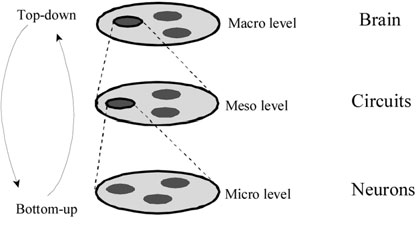 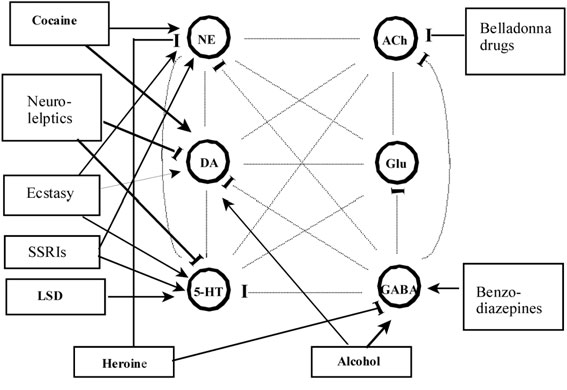 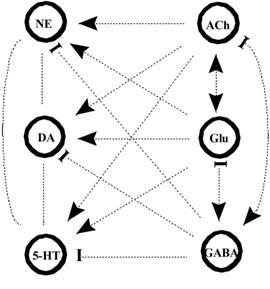 Fig. 3 The ªneuro- As a next step, this structure-oriented graphical model should be chemical interaction transformed into a formal functional model reflecting the dy- matrixº as a heuris- namics of the various processes. However, a formal model, con- tic schema [56]. Six sisting, for instance, of a system of six coupled nonlinear differ- neurochemical sys- ential equations, cannot be solved mathematically without using repinephrine (NE), numerical methods. For such solutions, the quantification of the acetylcholine (ACh), couplings between the components of the system, namely the synapse dynamics, must be known. This is currently not the glutamate (Glu),do- case. Therefore, only partial modeling is possible ([44]; Tretter and Scherer, in this issue p. S26). Here, as an example, we focus ric acid (GABA),and on the basic circuitry model from Arvid Carlsson ([7]; Carlsson, their 15 interrela- in this issue p. S10) and select the relevant components from tions are depicted, the entire system (Fig. 5). However, the behavior of three recipro- some of them expli- cally interconnected elements is already impossible to foresee by citly. Annotation: Ar- rows represent acti- the imagination alone. For exploratory purposes, this model can vations,lines with transoms stand for inhibitions. Scored lines without therefore be modeled and tested by computer simulations (Tret- arrows or transoms at the end of the line stand for relations not inter- ter and Scherer, in this issue p. S26) and formal analyses preted here.
(Schwegler, in this issue p. S43). Simulations performed by suchmodels help identify relevant questions for future empirical re-search. It should be kept in mind here, that the value of a model Even a first glance at the two matrices reveals the high level of thus lies in the purpose of its construction, and it is therefore not complexity of the reactions of the neurochemical network. How- necessary to represent all the details of reality! ever, it must also be kept in mind that every system has severalsubsystems with regard to the various receptor subtypes [9]. For As appropriate empirical data are not available, computational instance, the dopamine system might have excitatory D1 recep- modeling of the entire neurochemical matrix is not very useful tors mainly on glutamate neurons and inhibitory D2 receptors at present. However, the dynamics of the entire system, for heur- mainly on GABA neurons [45,52]. With regard to these connec- istic purposes, can be represented in the framework of a mobile, tions, a high level of dopamine release would simultaneously which could allow for better understanding of complex dynam- highly activate D1 receptors and D2 receptors, thus pushing very strongly an accelerator and a brake, simultaneously. But D1and D2 receptors probably demonstrate differences in sensitivityresulting in different temporal dynamics (Durstewitz, in this is- The neurochemical mobile ± a heuristic scheme for complex sue p. S72). Macroanatomical details should also be considered in this scheme, as most authors think that the cortical dopaminefunction is reduced, when the striatal function is elevated (Grün- The concept of a ªneurochemical mobileº was proposed by Jür- der et al., in this issue p. S21 and Winterer, in this issue p. S68).
gen Fritze [16]. It is an integrative framework and a metaphorical Also this aspect could be integrated in this matrix.
concept representing complex nonlinear dynamics. This mobileconcept was further developed as a heuristic tool for clinical ob- Fig. 4 Influences on the operation of the neurochemical interaction matrix [56]. Sur- vey of actions of psychopharmacological drugs and illicit drugs on various system components. Contact with a system com- ponent can lead to changes in another sys- tem component. Legend: s. Fig. 3.
Bender W et al. Towards Systemic Theories ¼ Pharmacopsychiatry 2006; 39 Suppl 1: S4 ±S9 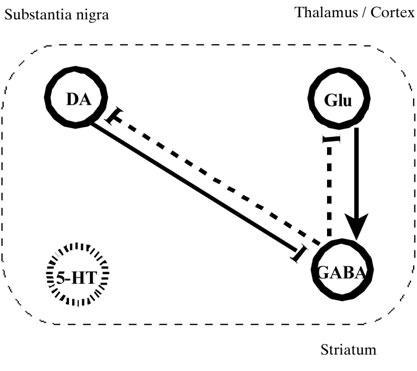 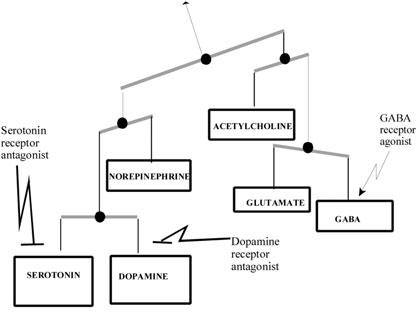 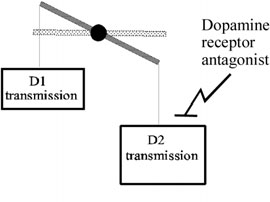 Grape Breeding for the Prairies: Inheritance of Resveratrol production in hybrid grapes 2008/09 Annual Project Summary for The Alberta Horticultural Growers Congress and Foundational Society By Tyler Kaban University of Saskatchewan Breeding Overview Over the last three seasons, I was able to perform multiple controlled crosses utilizing parent vines of diverse genetic backgrounds. Research started in my last year of undergraduate studies has continued