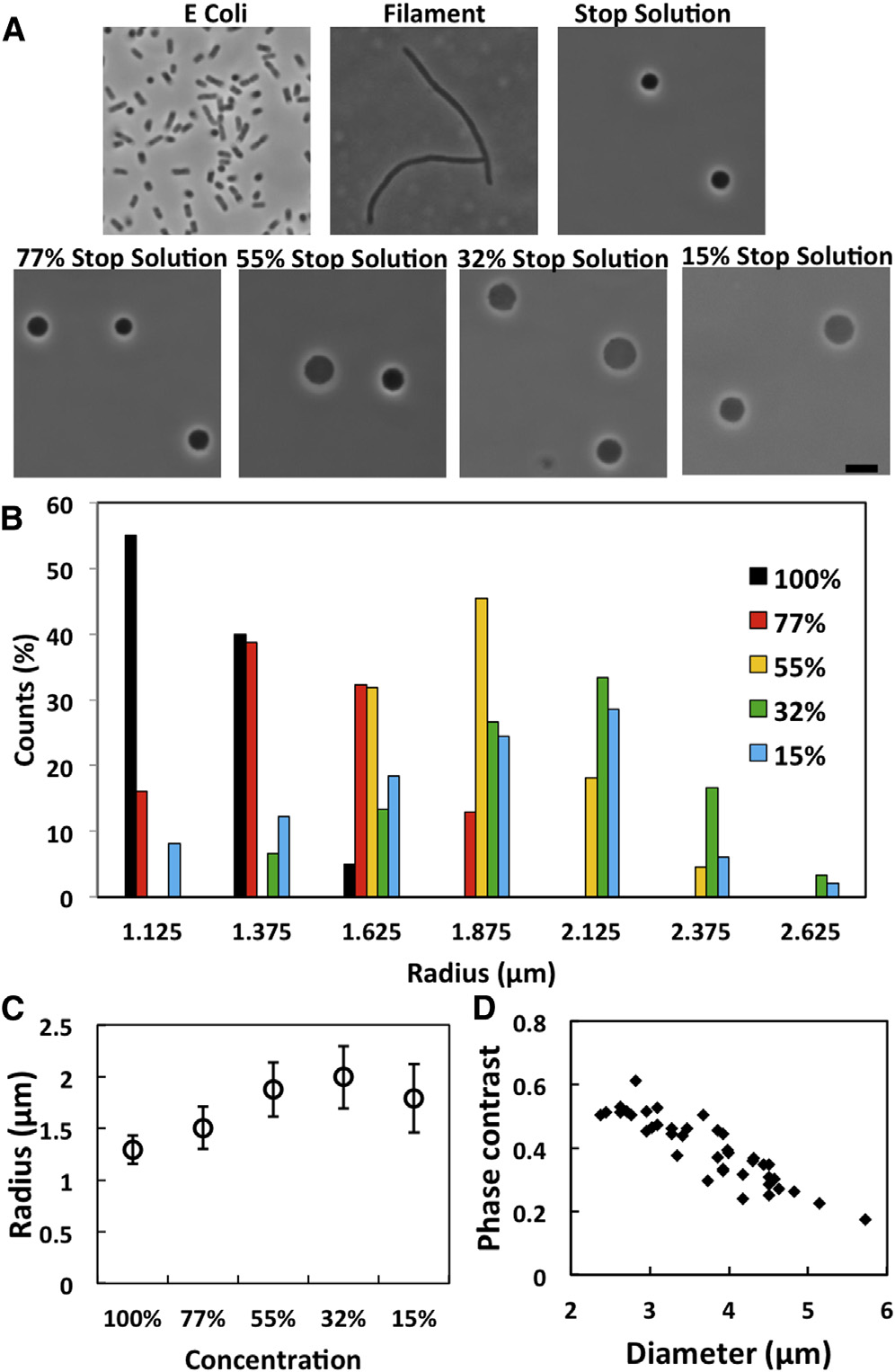 Micropipette aspiration of spheroplastmembranes The method of aspiration serves two purposes: one is toapply tension to the membrane and another is to measurethe membrane area changes. Previous studies have shownthat the membrane area changes by tension (by peptidebinding ), or by structural events (such as pore forma-tion) ) can provide a quantitative description for thephysical event taking place in the membrane. In this studywe used a micropipette to apply a small negative pressure(aspiration) to a spheroplast. When a spheroplast in the100% STOP solution was aspirated by a micropipette,the whole cell deformed and flowed into the pipette(). This could be because of the size of the micropi-pette being too close to the size of the spheroplast, or itcould be what was described as a liquid drop model inthe micropipette-aspiration experiments of human bloodcells (). We did not analyze the spheroplasts from100% STOP solution.
When the osmolality of the external medium was reduced, the cell volume visibly enlarged because of wa-ter influx. The response of the enlarged spheroplasts tomicropipette aspiration was similar to the response of aGUV of lipids. In this case, aspiration reshaped the sphe-roplast surface to include a protrusion in the micropipette,leaving a larger spherical part outside the pipette (The equal osmolality inside and outside shouldkeep the volume of the spheroplast constant. Then anysurface area change would result in a change in the lengthof the protrusion, from which we measured the fractionalarea change DA=A (see Materials and Methods ()).
E. coli spheroplasts. (A) E. coli cells, filamentous cells, sphe- We systematically investigated the spheroplast mem- roplasts in 100% STOP solution, and in diluted STOP solutions. Scale bar ¼ branes by the micropipette-aspiration method and found 5 mm. (B) Size distribution among a population in different concentrations the following general properties for E. coli spheroplast of STOP solution. As the external concentration decreased below 50%, more spheroplasts appeared to have lost the interior phase contrast. Thespheroplasts without interior phase contrast were not included in the radiussurvey. (C) The average radius of the population in different concentrations.
Membrane area expansion is a relaxation process (D) Correlations of size versus phase contrast ðI0  IÞ=I0 where I was theaverage phase contrast intensity of cytosol, I We found that the initial surface tension of a spheroplast was 0 that of the outside solution.
Spheroplasts without phase contrast had ðI0  IÞ=I0(0:01. To see this always zero, except for very swollen spheroplasts that will figure in color, go online.
be discussed later. When a tension was applied to the sphe-roplast surface, its surface area increased in a manner spheroplasts, indicating that there was a membrane reservoir describable as a relaxation process (Depending on in the original state of spheroplast. The degree of swelling the amount of area change, it could take as long as 100s was correlated to the reduction of the interior phase contrast for the surface area to reach equilibrium. If the tension of the spheroplast against the external medium. It is impor- was then reduced to the initial near zero value, the apparent tant to note that the swelling and the phase contrast changes surface area recovered the original value also in a relaxation were reversible (). The size distribution of the sphe- manner. This is very different from stretching a lipid bilayer roplasts is plotted for different external osmolalities in (), where the area change follows the tension with a B and the average size in C. The correlation between speed of sound in the material ).
the size and the interior phase contrast is shown in D.
The relaxation process gave rise to a loading-rate depen- In general swelling increased with decreasing external dence (which is well known in single-protein pulling osmolality and swelling reduced phase contrast. However, experiments ). When the tension was loaded in in a given external osmolality, there was a range of degrees different rates, the surface area expansion followed different of swelling among the spheroplast population.
relaxation paths ().
Biophysical Journal 107(9) 2082–2090 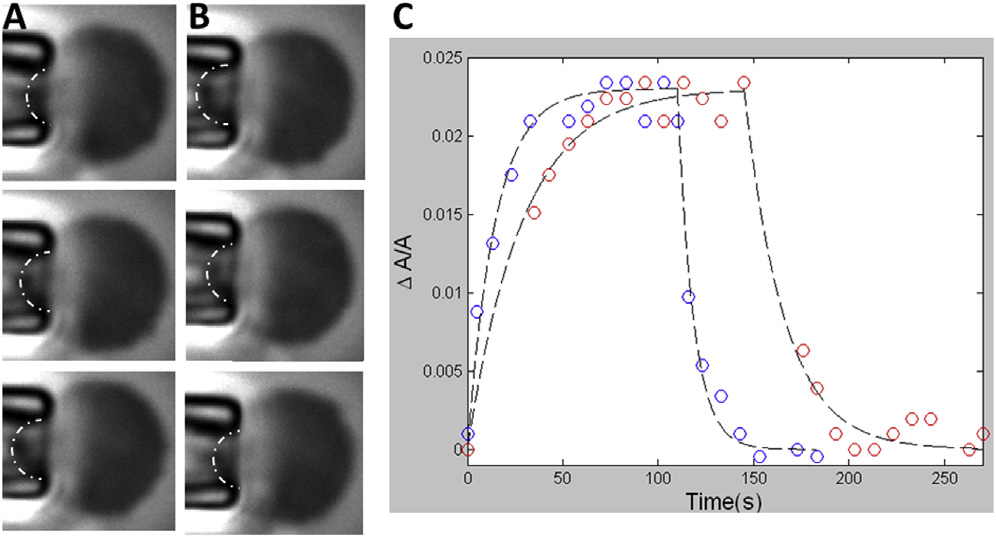 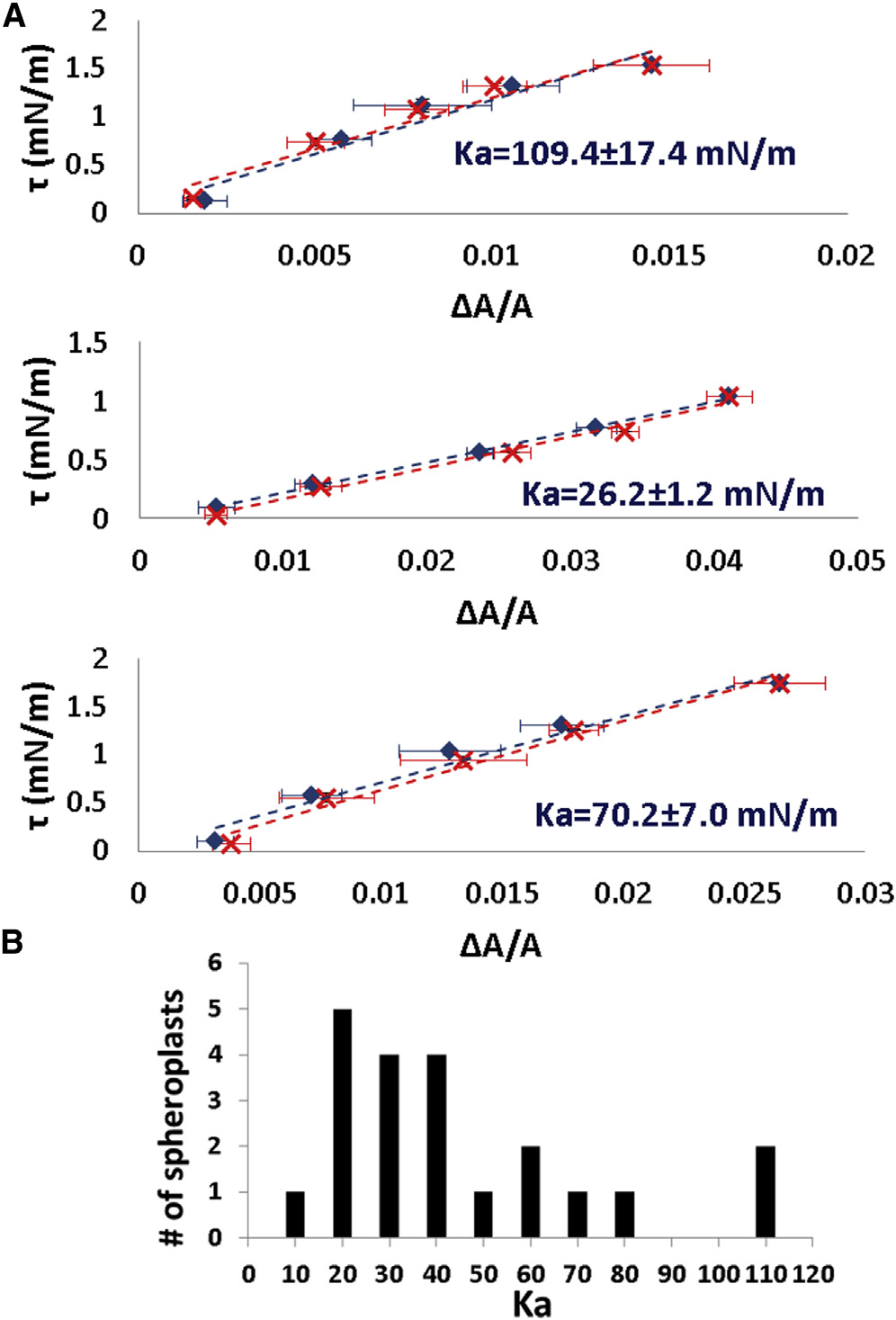 E. coli Spheroplast Membrane Time dependent area change of spheroplast membrane under a change of tension. (A) At time 0, the tension was increased from 0.25 to0.83 mN/m. The images from top to bottom were at t ¼ 0, 5, and 70 s. Scalebar ¼ 2.5 mm. (B) After the membrane area reached equilibrium, the tensionwas decreased to 0.25 mN/m. The images from top to bottom were at t ¼ 0,5, and 70 s. The dash-dot lines indicate the geometric features used to calcu-late the area changes. (C) Two area versus time curves were performedat different rates of applying tension: red, the tension (from 0.25 to0.83 mN/m) was applied by lowing the water column at 2 mm/s; blue, at10 mm/s (see Materials and Methods). The curve fitting used the formuladescribed in Discussion; the time constants for the blue curve are 14.6and 8.4 s for area increase and decrease, respectively. 28.8 and 20.9 s forthe red curve, respectively. To see this figure in color, go online.
Surface area expansion by tension is reversible Every spheroplast in a constant external osmolality gave awell-defined equilibrium tension t versus DA=A curve.
The curve is approximately linear for a small range of t.
(The range of t was limited by the height of the manometerwater column used to generate the aspiration pressure—see (A) Three examples of reversible tension t versus fractional Materials and Methods). Importantly we found that the area change DA=A of spheroplast membranes. In each example blue data stress-strain relation is reversible and repeatable are for increasing tension and red for decreasing tension. The data points and ) within errors. From the linear relation, we define are equilibrium values. The error bars represent the uncertainties in calcu- the apparent stretching modulus K lating the area from the microscope images. The uncertainties in tension a ¼ t=ðDA=AÞ. We calculation are smaller than the data symbols. K a, the apparent stretching a of the spheroplasts taken from a population modulus, was measured from the slope of each curve. (B) Ka of a sphero- equilibrated in external osmolality 0.237 Osm (B).
plast population in 28% STOP solution. To see this figure in color, go online.
The largest values of Ka from the population are 100 mN/m. In comparison, the typical values of Ka for lipidbilayers are 200 mN/m ). Only very swollen sphero- plasts. The requirement of a 100 microscope objective plasts exhibit Ka values in the same range (see below).
and its short working distance made it very difficult to trans-fer an aspirated spheroplast from one chamber to another, as Temperature dependence we did with GUVs ). Also, an aspirated spheroplast was Bacterial membranes may have a gel-fluid phase transition easily detached from the micropipette by a flow in the cham- below the growth temperature (). Thus it is important to ber, making it difficult to change the solution in the sample test the possible temperature dependence of their elastic prop- chamber. We could only change the solution osmolality erties. A number of randomly chosen spheroplasts were qualitatively. This was done by introducing an open tube measured by t versus DA=A, first in room temperature 25C containing a 100% STOP solution that included 1 mM car- then at 37C, the growth temperature (In all cases, boxyfluorescein (CF) into the chamber. We let the diffusion we detected no significant temperature dependence. Thus from the tube slowly increased the osmolality inside the we performed the rest of experiments in room temperature.
chamber until the fluorescence intensity of CF in the cham-ber appeared to be uniform. We measured K Stretching modulus K a changes with osmolality plast before and after the introduction of the open tube.
Measurements of the same spheroplast in different osmolal- We found that Ka invariably decreased if the external osmo- ities were difficult because of the small size of the sphero- lality was increased Biophysical Journal 107(9) 2082–2090 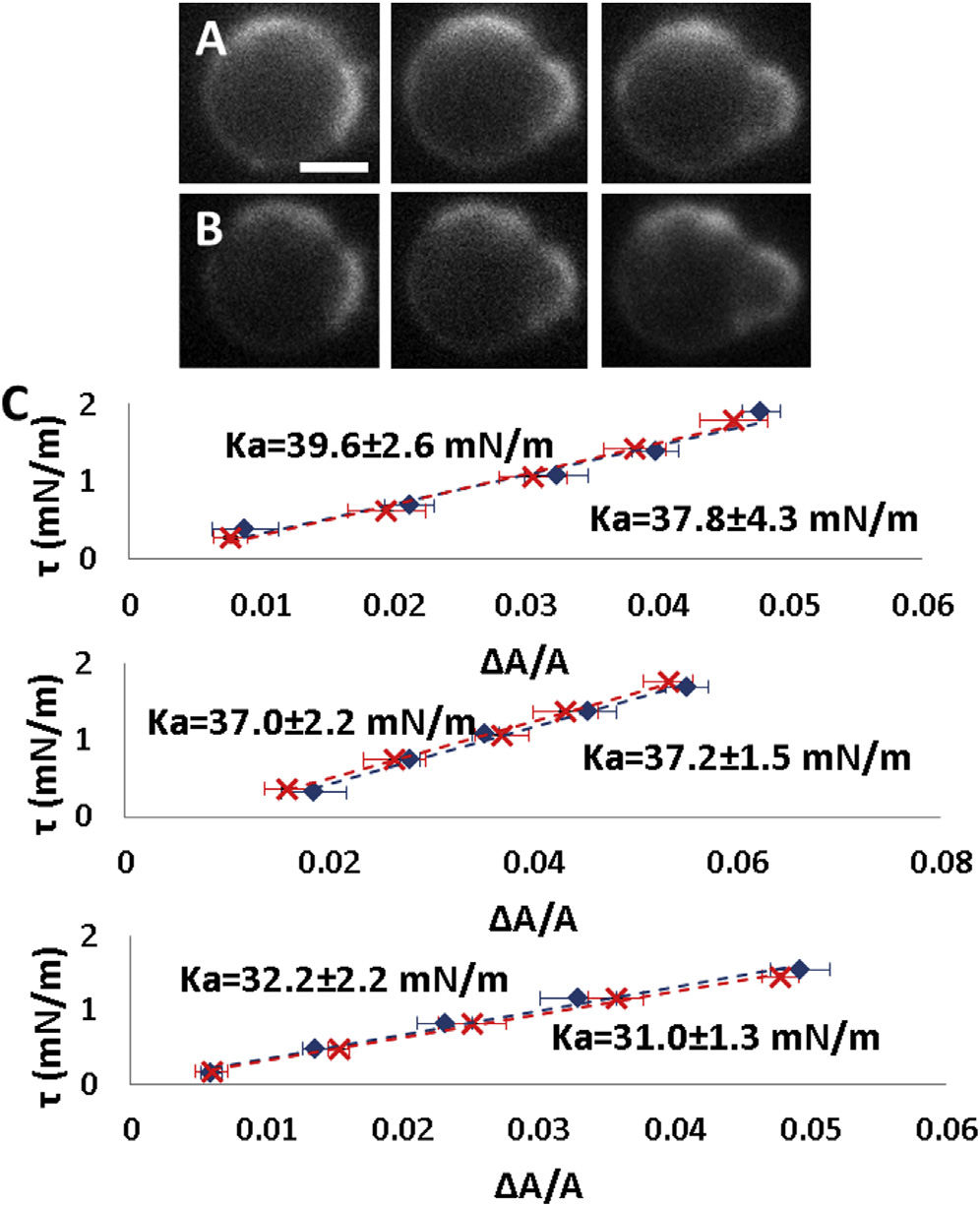 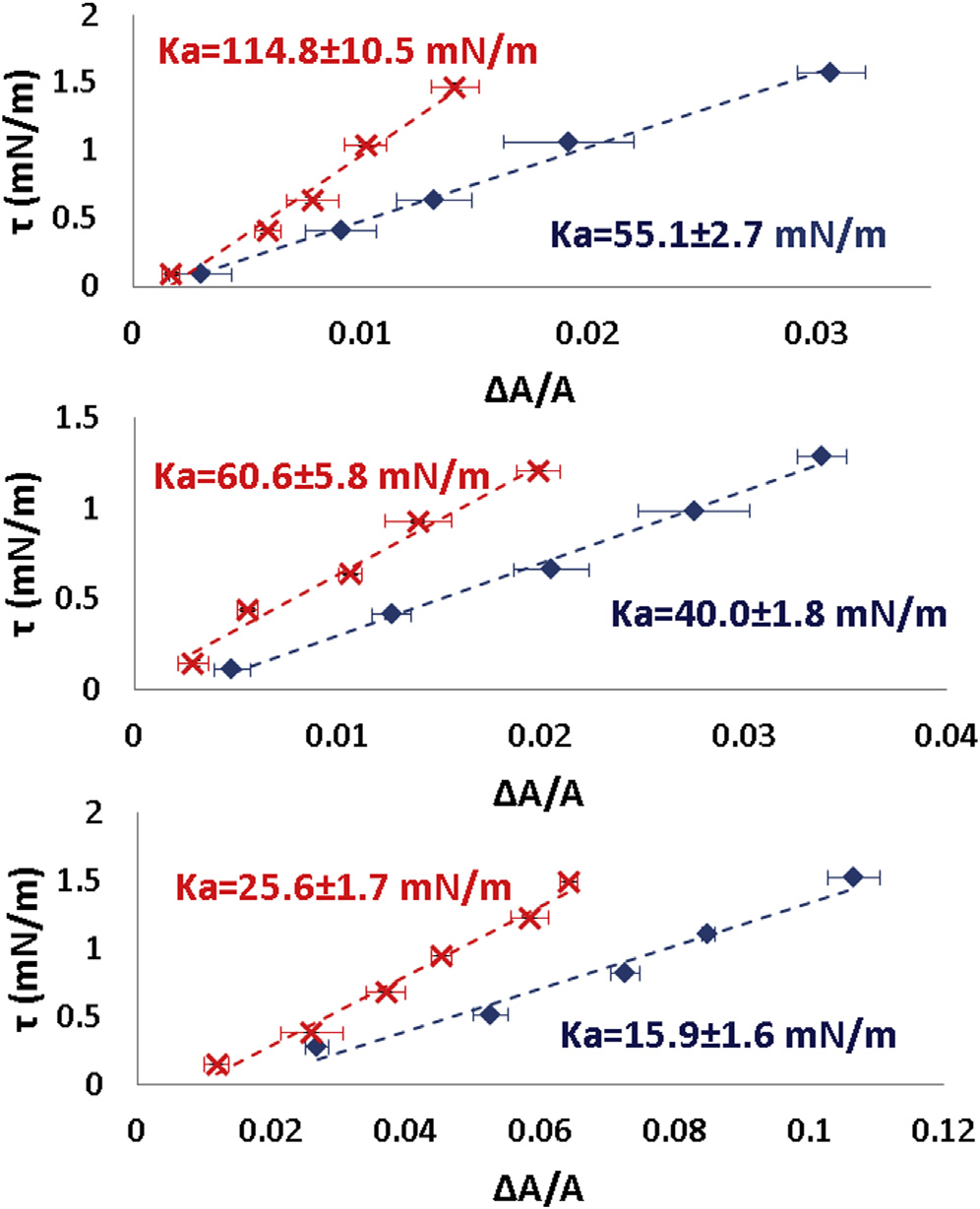 Tension t versus DA=A measurement at 25C and at 37C.
Ka decreased if the external osmolality was increased. Ka (A) A spheroplast was first measured at 25C. The image from left to right was first measured in a 28% STOP solution (red points). Then an open at tension t ¼ 0.34, 1.21, and 2.14 mN/m. (B) The same measurement was tube containing a 100% STOP solution and carboxyfluorescein (CF) was repeated at 37C. Scale bar ¼ 2.5 mm. (C) Data from three spheroplasts: introduced into the chamber. The diffusion from the tube slowly increased solid line (blue diamonds) at 25C; dotted line (red crosses) at 37C. No the osmolality inside the chamber until the intensity of CF in the chamber significant temperature dependence was detected. To see this figure in color, became uniform. Then Ka was measured again (blue points). The value of Ka always decreased. Three measurements are shown. To see this figure incolor, go online.
Very swollen spheroplast In all of the previous examples to ), we detected membrane surface area was lost, i.e., when the tension was no initial membrane tension in the aspirated spheroplasts.
reduced to smaller values, the membrane did not recover its In contrast, very swollen spheroplasts (as judged by small original smaller area ).
interior phase contrast) were under a surface tension. For Spheroplasts in the presence of the metabolic inhibitor CCCP such spheroplasts, a larger suction pressure was requiredfor aspiration and the initial tension was T 1 mN/m To test if the stretching reversibility is related to bacterial The values of Ka for very swollen spheroplasts metabolism, we added 100 mM metabolic inhibitor CCCP are 200 mN/m, close to the values of Ka measured from () into a spheroplast suspension in 100% STOP solu- GUVs of E. coli total lipid extract ( tion. After 1 h, 30 ml of the suspension was injected into anobservation chamber containing 28% STOP solution and Spheroplasts that lost the interior phase contrast 100 mM CCCP. The spheroplast population in the observa- In a normal spheroplast population, there were always some tion chamber looked normal initially. But after each addi- that appeared to have lost the interior phase contrast (but tional hour, more and more spheroplasts lost the interior still clearly visible by their boundaries). If the solution con- phase contrast. The aspiration experiments were performed tained the nucleic acid-staining, bacterial viability indicator soon after the spheroplasts were introduced into the ob- Sytox Green (the indicator appeared to first enter such servation chamber. Several spheroplasts with intact phase spheroplasts and then leaked out (). This implies that contrast as well as some without interior phase contract the no-contrast spheroplasts have lost their nucleic acids were randomly chosen for measurement. The results ). The response of no-contrast spheroplasts to aspiration (were the same as shown in . The spheroplasts was different from normal spheroplasts. If the membranes of poisoned by CCCP but still had intact phase contrast no-contrast spheroplasts were stretched, the reversibility of behaved exactly the same as those spheroplasts that had Biophysical Journal 107(9) 2082–2090 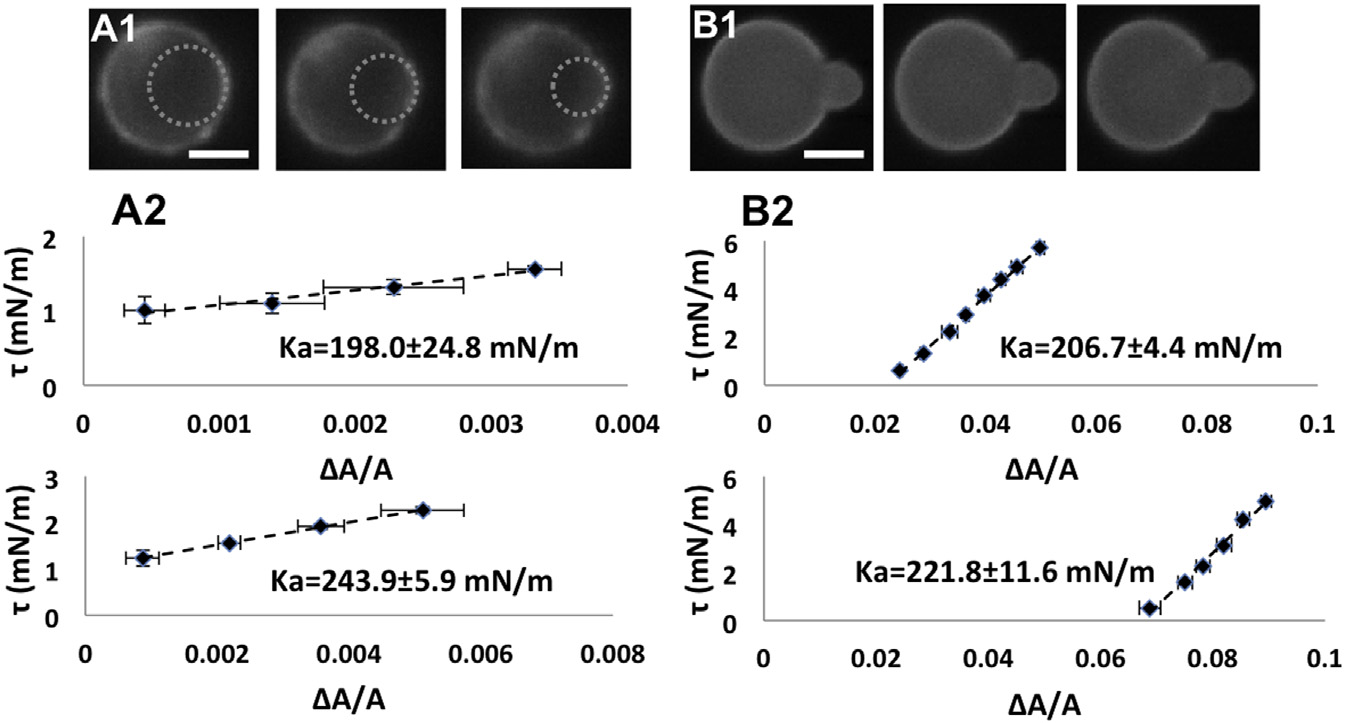 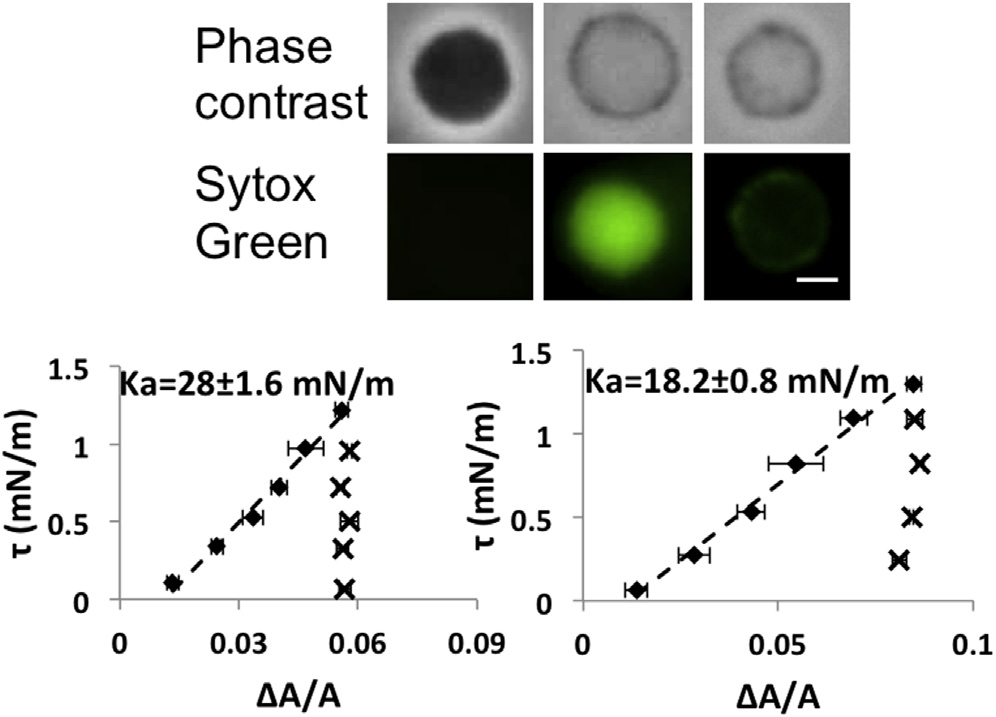 THE CENTRE FOR HEALTH IN THE HEART OF RODNEY Breast reconstruction following a mastectomy using Brava and autologous fat transfer (AFT) Rodney Surgical Centre is leading You adjust the pressure, starting at a comfortable level and gradually the way with a scientifically-proven increasing it, depending on your tolerance. Most patients ramp it up