THE JOURNAL OF BIOLOGICAL CHEMISTRY Vol. 278, No. 48, Issue of November 28, pp. 47987–47996, 2003 2003 by The American Society for Biochemistry and Molecular Biology, Inc.
Printed in U.S.A. Structural Rearrangements of the 10 –23 DNAzyme to ␤3 Integrin
Subunit mRNA Induced by Cations and Their Relations to the
Catalytic Activity*
Received for publication, January 16, 2003, and in revised form, July 22, 2003 Published, JBC Papers in Press, September 2, 2003, DOI 10.1074/jbc.M300504200 Marcin Cieslak‡, Jacek Szymanski§, Ryszard W. Adamiak¶, and Czeslaw S. Cierniewski§储**
From the Centers for ‡Molecular and Macromolecular Studies and 储Medical Biology and Microbiology, Polish Academy ofSciences, §Department of Molecular and Medical Biophysics, Medical University of Lodz, 92-215 Lodz, Poland and¶Institute of Bioorganic Chemistry, Polish Academy of Sciences, 61-704 Poznan, Poland The intracellular ability of the "10 –23" DNAzyme to
biological processes such as tumor angiogenesis. For example, efficiently inhibit expression of targeted proteins has
DNAzymes to ␤1 and ␤3 mRNA reduced expression of targeted been evidenced by in vitro and in vivo studies. However,
integrin subunits in endothelial cells and blocked proliferation, standard conditions for kinetic measurements of the
migration, and network formation in a fibrin and Matrigel™ DNAzyme catalytic activity in vitro include 25 mM Mg2ⴙ,
matrix (2). In a cell culture system, a 10 –23 deoxyribozyme a concentration that is very unlikely to be achieved
designed against 12-lipoxygenase mRNA specifically down-reg- intracellularly. To study this discrepancy, we analyzed
ulated expression of this protein and its metabolites, which are the folding transitions of the 10 –23 DNAzyme induced
known to play a crucial role in tumor angiogenesis (3). Simi- by Mg2ⴙ. For this purpose, spectroscopic analyzes such
larly, the DNAzyme to VEGFR2 mRNA cleaved its substrate as fluorescence resonance energy transfer, fluorescence
efficiently and inhibited the proliferation of endothelial cells anisotropy, circular dichroism, and surface plasmon
with a concomitant reduction of VEGFR2 mRNA and blocked resonance measurements were performed. The global
geometry of the DNAzyme in the absence of added Mg2ⴙ
tumor growth in vivo (4).
seems to be essentially extended, has no catalytic activ-
The origins of the DNAzyme catalytic activity are not yet ity, and shows a very low binding affinity to its RNA
fully understood, but the observed rate enhancements probably substrate. The folding of the DNAzyme induced by bind-
are generated by a number of factors, including metal ion and ing of Mg2ⴙ may occur in several distinct stages. The
nucleobase catalysis and local stereochemical effects. The first stage, observed at 0.5 mM Mg2ⴙ, corresponds to the
10 –23 DNAzyme has been developed using an in vitro selection formation of a compact structure with limited binding
strategy on the basis of its ability to cleave RNA in the presence properties and without catalytic activity. Then, at 5 mM
of Mg2⫹ (1). It has a catalytic domain of 15 highly conserved Mg2ⴙ, flanking arms are projected at right position and
deoxyribonucleotides flanked by two substrate-recognition do- angles to bind RNA. In such a state, DNAzyme shows
mains and can cleave effectively between any unpaired purine substantial binding to its substrate and significant cat-
and pyrimidine of mRNA transcripts. Like many other en- alytic activity. Finally, the transition occurring at 15 mM
zymes catalyzing phosphoryl-transfer reactions, it is recog- Mg2ⴙ leads to the formation of the catalytic domain, and
nized as a metalloenzyme requiring divalent metal, preferen- DNAzyme shows high binding affinity toward substrate
tially Mg2⫹ ions, for catalytic activity. Divalent cations play a and efficient catalytic activity. Under conditions simu-
crucial role in these mechanisms, as evidenced by a number of lating intracellular conditions, the DNAzyme was only
partially folded, did not bind to its substrate, and
observations. For example, addition of La3⫹ to the Mg2⫹-back- showed only residual catalytic activity, suggesting that
ground reaction mixture inhibited the DNAzyme-catalyzed re- it may be inactive in the transfected cells and behave
actions, suggesting the replacement of catalytically and/or like antisense oligodeoxynucleotide.
structurally important Mg2⫹ by La3⫹ (5). The function of diva-lent metal cations in DNAzyme activity is very complex andincludes (i) stabilization of the transition state of reaction. The The typical DNAzyme,1 known as the "10 –23" model, has divalent metal cation dependence of the enzyme was described tremendous potential in gene suppression for both target vali- as being the evidence supporting a chemical mechanism involv- dation and therapeutic applications (1). It is capable of cleaving ing metal-assisted deprotonation of the 2⬘-hydroxyl located ad- single-stranded RNA at specific sites under simulated physio- jacent to the cleavage site (6). It also includes (ii) neutralization logical conditions and can be used to control even complex of negative charges of phosphate groups, thus facilitating DNA-RNA interactions. High resolution x-ray crystal structuresof Mg2⫹ and Ca2⫹ salts of the model B-DNA decamers * This work was supported by Grant Z-KBN 004/PO4/98 from the CCAACGTTGG and CCAGCGCTGG revealed sequence-spe- Polish Committee for Scientific Research. The costs of publication ofthis article were defrayed in part by the payment of page charges. This cific binding of Mg2⫹ and Ca2⫹ to the major and minor grooves article must therefore be hereby marked "advertisement" in accordance of DNA, as well as nonspecific binding to backbone phosphate with 18 U.S.C. Section 1734 solely to indicate this fact.
oxygen atoms. This accounts for the neutralization of between ** To whom correspondence should be addressed: Dept. of Molecular 50 and 100% of the negative charges of phosphate groups (7).
and Medical Biophysics, Medical University of Lodz, 6/8 MazowieckaStreet, 92–215 Lodz, Poland. Tel.: 48-42-6783393; Fax: 48-42-6789433; (iii) Some of these bound cations may also play a purely struc- tural role by inducing proper folding of the DNAzyme molecule, 1 The abbreviations used are: DNAzyme, DNA enzyme suitable for thus helping to organize the enzyme into its active conforma- the sequence-specific cleavage of RNA; FRET, fluorescence resonance tion. There are several reports showing that Mg2⫹ helps to energy transfer; HPLC, high pressure liquid chromatography; HUVEC,human umbilical vein endothelial cell.
stabilize different types of double-stranded DNA structures (8, This paper is available on line at http://www.jbc.org 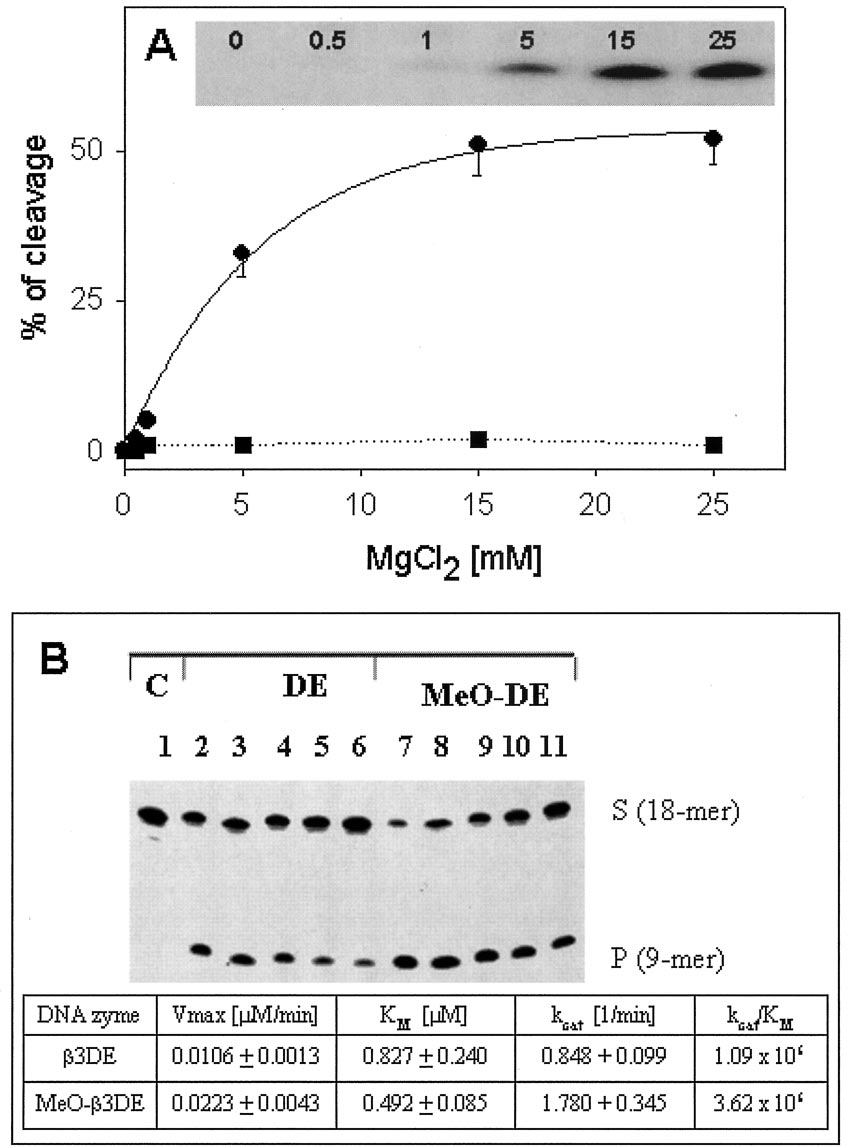 Structural Transitions Induced in the DNAzyme by Mg2⫹ FIG. 1. Cleavage of ␤3 integrin subunit mRNA substrate by DNAzymes in vitro. A, the effect of Mg2⫹ concentration on enzymatic activity
of DNAzymes. MeO-␤3DE (–) and its mutant MeO-␤3DE (f–f) were incubated with the RNA substrate (molar ratio, 1:80) for 10 min in the presence of increasing concentrations of Mg2⫹ ranging from 0 to 25 mM. The cleavage reaction was stopped by the addition of 0.5 M EDTA, andthe products were separated by electrophoresis in 20% polyacrylamide gels under denaturing conditions. Relative amounts of cleavage products(% of cleavage) are plotted versus Mg2⫹ concentration (MgCl [m M]). Inset, autoradiogram of the gel showing the cleavage product obtained at different Mg2⫹ concentrations (0 –25 mM). B, catalytic activity of ␤3DE and MeO-␤3DE. In these experiments, aliquots of the 32P-labeled mRNAsubstrate were incubated with DNAzymes. ␤3DE and MeO-␤3DE were used at a molar ratio (substrate:enzyme) ranging from 5:1 to 80:1 for upto 60 min at 37 °C. The cleavage products obtained after a 10-min incubation of 32P-labeled mRNA substrate are shown alone (lane 1) or withDNAzymes (␤3DE, MeO-␤3DE) mixed at the ratio 5:1 (lanes 2 and 7), 10:1 (lanes 3 and 8), 20:1 (lanes 4 and 9), 40:1 (lanes 5 and 10), and 80:1 (lanes6 and 11). DNAzymes were used at the concentration of 0.025 ␮M. Reactions were carried out in 50 mM Tris, pH 8.0, containing 15 mM MgCl , 0.01% SDS. Amounts of the product were evaluated by a PhosphorImager (Amersham Biosciences) and used to calculate kinetic parameters. They weredetermined in multiple turnover reactions and represent a mean of three independent experiments.
9) and can induce bending or enhance curvature in DNA (10).
with self-complementary ends (11). These structural effects of Furthermore, Mg2⫹ and other divalent cations enhance end-to- cations may be even more profound in a single-stranded and end DNA interactions, particularly in the case of fragments flexible DNAzyme molecule. 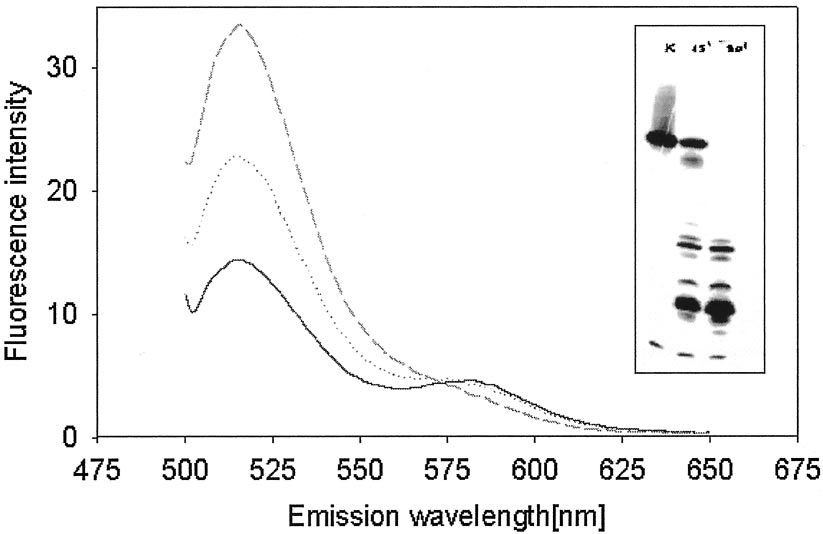 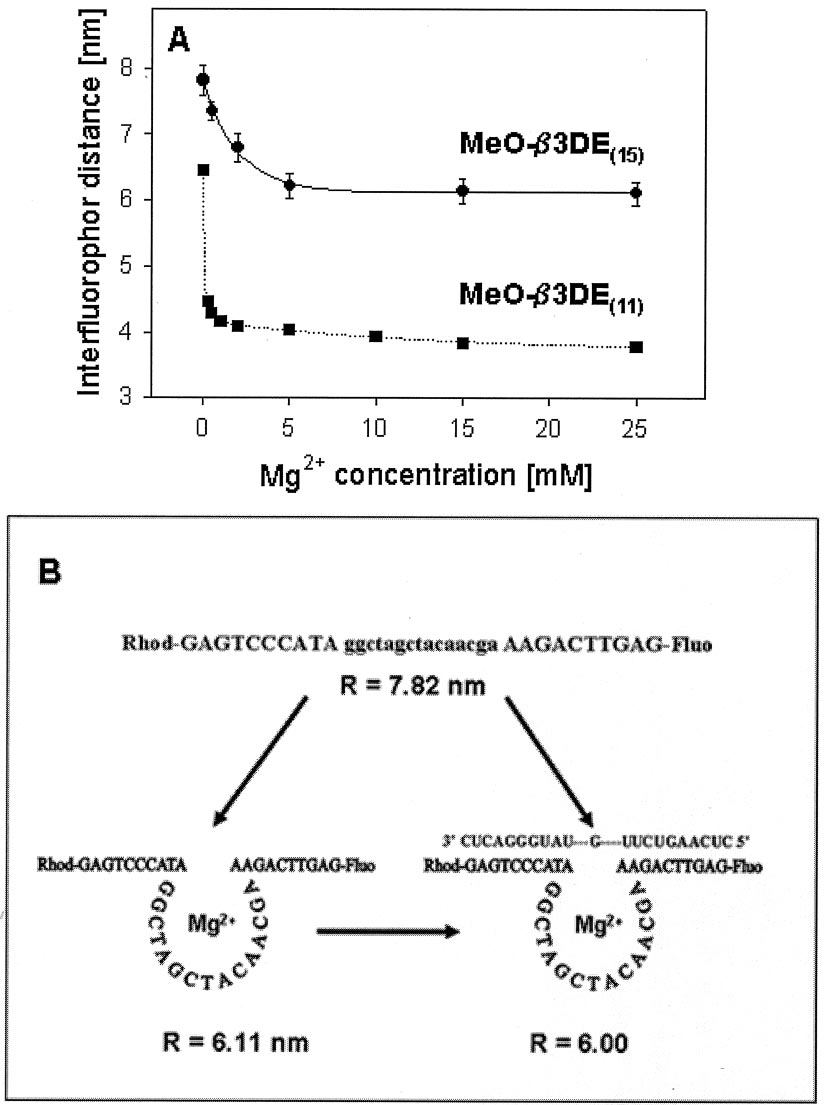 Structural Transitions Induced in the DNAzyme by Mg2⫹ FIG. 4. FRET analysis for the MeO-␤3DE as a function of Mg2ⴙ concentration. A, calculated interfluorophore distances based on
measured efficiency of energy transfer presented as a function of MgCl concentration. The plot shows the variation in FRET efficiency as a function of Mg2⫹ concentration up to 25 mM when Fluo-MeO-␤3DE -Rhod (–) or Fluo-MeO-␤3DE -Rhod (f–f) were tested. In accordance with the model, the FRET efficiency is found to increase (indicating a reducing end-to-end distance) over this complete range. B, scheme with theexpected behavior of the free DNAzyme or complexed with its RNA substrate in the presence of Mg2⫹. The distances (R) were calculated based onFRET analysis.
substrate. Essentially the same changes in the interfluoro- bozyme by means of high affinity binding to sites (Fig. 4B).
phore distance were induced in the Fluo-MeO-␤3DE-Rhod To evaluate overall changes induced in the DNAzyme by upon binding of other divalent cations, such as Ca2⫹ and Mn2⫹ cations, the fluorescence anisotropy of both fluorophores in (Table I). Such folding of the DNAzyme does not result simply Fluo-MeO-␤3DE-Rhod was measured in the presence of in- from the neutralization of the polyanionic nature of the oligode- creasing concentrations of Mg2⫹, Ca2⫹, Li⫹, Na⫹, and K⫹. The oxynucleotide, because neither Na⫹ nor K⫹ added in place of fluorescence anisotropy r reflects the local and global motions Mg2⫹, even at 1 M, showed any effect. In the case of DNAzyme of the fluorophore and is close to zero for a freely rotating with the 11-mer loop, Fluo-MeO-␤3DE fluorophore. The theoretical upper limit of 0.4 corresponds to a matically increased upon the addition of 0.5 mM Mg2⫹, indicat- totally non-rotating fluorophore (23). The fluorescein- and rho- ing that these cations induce folding of the mutated deoxyri- damine-labeled DNAzyme has a flexible single-stranded mole- 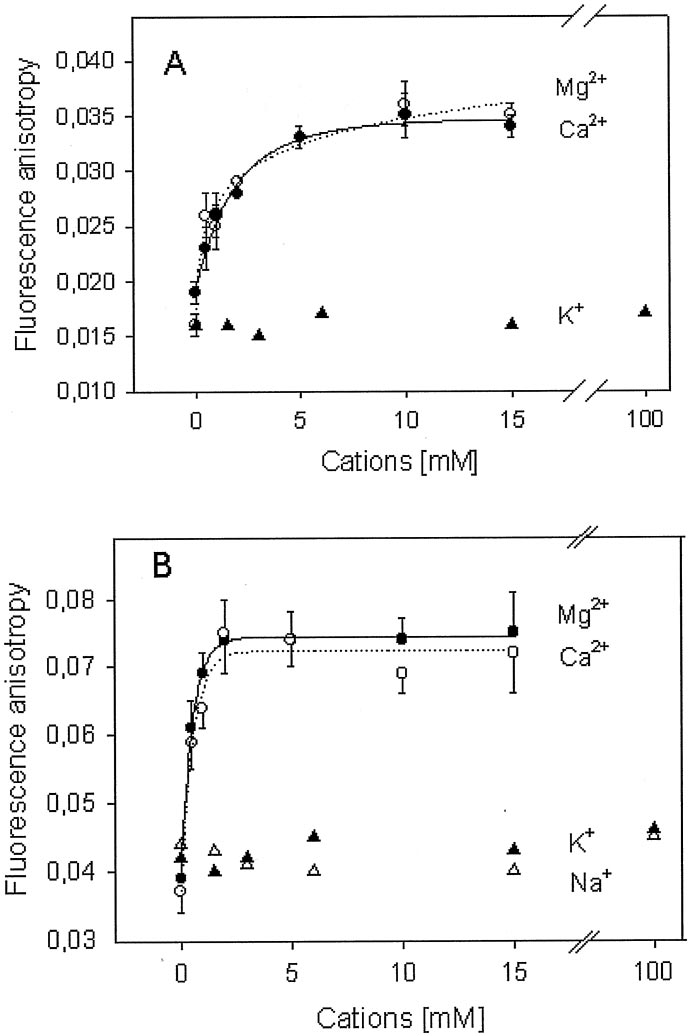 Structural Transitions Induced in the DNAzyme by Mg2⫹ cule characterized by a low r value ⫽ 0.016 and 0.037, as or Ca2⫹ concentration reached 5 mM or 1 mM, respectively, measured for fluorescein and rhodamine, respectively (Fig. 5).
indicating the increased condensation state of the molecule.
In both cases, the fluorescence anisotropy doubles when Mg2⫹ However, there was no change in the fluorescence anisotropywhen monovalent cations were used even at much higher con- centrations (Fig. 5). These results are fully consistent with the The estimated interfluorophore distance based on proposed mechanism involving the divalent cation-induced FRET analysis of the Fluo-MeO-␤3 DE-Rhod folding of the DNAzyme and indicate that its molecule becomes The fluorophore-labeled MeO-␤3DE (40 nM) was incubated with dif- more compact upon Mg2⫹ binding.
ferent divalent cations used in the concentration range from 0 to 25 mM,and the interfluorophore distance R was evaluated based upon the Complex Formation between DNAzyme and its RNA Sub- Forster equation. Data represent a mean value of three separate deter- strate—The conformational changes of the DNAzyme induced by Mg2⫹ were next analyzed by CD spectroscopy (Fig. 6). CD Interfluorophore distance [nM] spectra of an ion-free DNAzyme/RNA complex were reported earlier (24). We have been interested in examining how far CDspectroscopy (being sensitive to the structure helicity and fold) could be applicable to probing binding of metal ions to single- and double-stranded species of interest. As the reference, CD spectra related to a regular complex formation (Fig. 6A), re- flecting an antisense mechanism, were inspected first. The CD FIG. 5. Effect of Mg2ⴙ on the fluores-
cence anisotropy of Fluo-MeO-␤3DE-
Rhod. MgCl (–), CaCl (E–E), KCl
(Œ–Œ), and NaCl (‚–‚) were added step-wise to 0.5 ␮M Fluo-MeO-␤3DE and incubated for 5 min before measuringthe fluorescence anisotropy. To monitorthe fluorescence anisotropy of fluorescein(A) or rhodamine (B), the samples wereexcited at 494 nm or 560 nm and fluores-cence emission was measured at 520 nmor 580 nm, respectively. 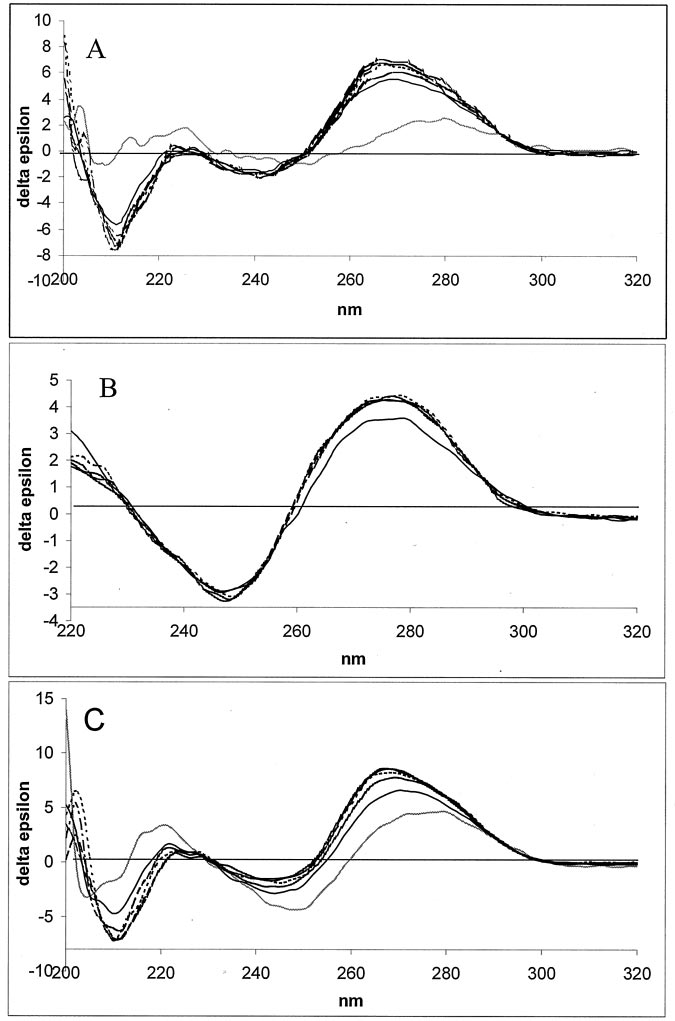