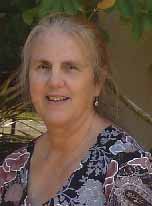 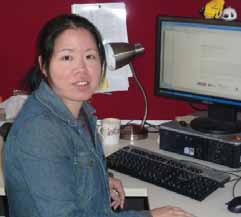 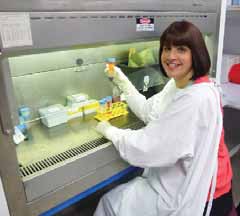 ASI Inc. Newsletter December 2012
Patricia Price Sylvia Lee Sonia Fernandez Studies of HIV in the majority world:
Key members of the team at UWA
are infected with HIV and/or HCV and the JakCCANDO project
the effects of antiviral therapy. She has Patricia Price (PhD,1985) runs several published several articles which utilised
ART is becoming more widely available in projects investigating HIV disease with a real-time PCR to evaluate mRNA expression
Asia, so many HIV patients with advanced focus on the consequences of beginning ART of viral genes and critical cytokines in viral
disease (AIDS) and untreated opportunistic with very low CD4 T-cell counts, as this is infections. More recently she has focussed
infections are starting therapy. JakCCANDO reality for many patients worldwide. To this on characterisation of humoral responses
stands for Jakarta CMV, Cardiovascular, end, she has initiated and run collaborations to HCV and has developed and exploited a
Antiretroviral, Neuropathy, Dental, with institutions in Africa and Asia. Patricia novel assay for neutralising antibody.
Ophthalmology. It is our third and largest is now returning to a long-standing interest
project based in the Cipto Mangunkusomo in CMV in relation to human disease; Sonia Fernandez completed her PhD in
Hospital affi liated with the University of specifi cally the varied manifestations of 2007. Since then she has continued to work
Indonesia. We will investigate the recovery CMV infection and how consequences in the fi eld of HIV immunology. Her main
of immune function and the role of CMV in arise from the infection of so few cells. The research interest is the immune recovery of
HIV patients beginning ART. Preliminary characterization of CMV genes encoding HIV infected patients receiving antiretroviral
data shows antibody responses to HIV are proteins homologous to components of therapy with a focus on the immunological
extremely high in Indonesian patients with human infl ammatory pathways presents mechanisms that underlie immune activation.
a signifi cant (but undocumented) burden many avenues for study. These can now be Current projects include the role of IFNα
of disease. This project will support four applied to real clinical situations – evaluating in immune activation and characterisation
Clinical/Biomedical PhD projects (at UI), the roles of immune activation, CMV burden of T-cell and B-cell homeostasis in HIV
plus graduate students enrolled through UI and T-cell competency in HIV patients, patients.
and UWA. Studies of candida immunology renal transplant recipients and healthy aging
are a new initiative.
Ben Oliver completed his PhD in 2012. His
thesis investigated whether plasma biomarkers
Evidence of repeated CMV reactivation Martyn French is a Winthrop Professor may inform about the immunopathogenesis
(the "footprint" of CMV) will include CMV in Clinical Immunology in the School of immune restoration disease associated
DNA (by PCR), antibodies and CD8 T-cell of Pathology and Laboratory Medicine with Mycobacterium tuberculosis (TB-IRD)
responses. This will be correlated with .
of UWA and also a Consultant Clinical or have a role in prediction and diagnosis. Immunologist/Immunopathologist at Royal He found that infl ammatory mediators of a) immune activation, immunosenescence Perth Hospital. He has had a research and the innate immune system may infl uence and T-cell homeostasis clinical interest in primary and secondary the immunopathogenesis of TB-IRD, while b) c l i n i c a l o u t c o m e s p r e v i o u s l y immunodefi ciency disorders for over 30 T cell responses may aid in diagnosis.
associated with CMV in other contexts, years. His current research is focused on
specifi cally ocular, cardiovascular and immune restoration disease in patients Constance Chew completed her PhD in
neurological sequelae assessed by expert commencing ART, immune activation and 2012. She analysed the role of TNF block
physicians
dysfunction in patients on long-term ART haplotypes as a predictor of risk for sensory and phagocytosis-inducing antibodies in the neuropathy in Caucasian, Malay, Chinese and Natural killer cells will be considered as a control of HIV infection. He also contributes South African HIV patients. Genotypes were mechanism affecting the "footprint" of CMV, to multi-centre research studies on the then reconstructed into TNF block haplotypes including an evaluation of the importance molecular pathology and genetics of primary and their effects on HIV-SN disease of genetically-determined variations in NK antibody defi ciency disorders.
were determined. Constance identified chemokines as molecules likely to mediate Silvia Lee completed her PhD in 2004 neuropathy and used confocal microscopy
and has continued a focus on research into to visualise infi ltrating macrophages around
the immune responses of patients who the damaged nerves. 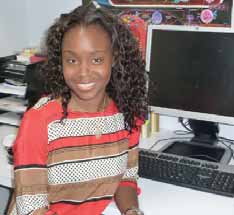 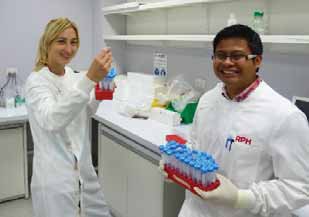 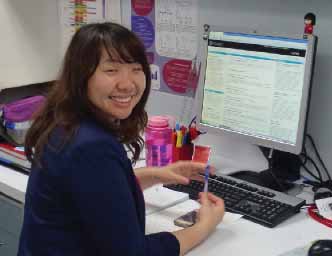