A quantitative analysis of insulin signaling in neurodegeneration

College of William and Mary

A Quantitative Analysis of Insulin Signaling in NeurodegenerationElise M. BraatzCollege of William and Mary Follow this and additional works at: Part of the nd the Recommended CitationBraatz, Elise M., "A Quantitative Analysis of Insulin Signaling in Neurodegeneration" (2015). College of William & Mary UndergraduateHonors Theses. Paper 119.
This Honors Thesis is brought to you for free and open access by the Theses, Dissertations, & Master Projects at W&M Publish. It has been accepted forinclusion in College of William & Mary Undergraduate Honors Theses by an authorized administrator of W&M Publish. For more information, pleasecontact . 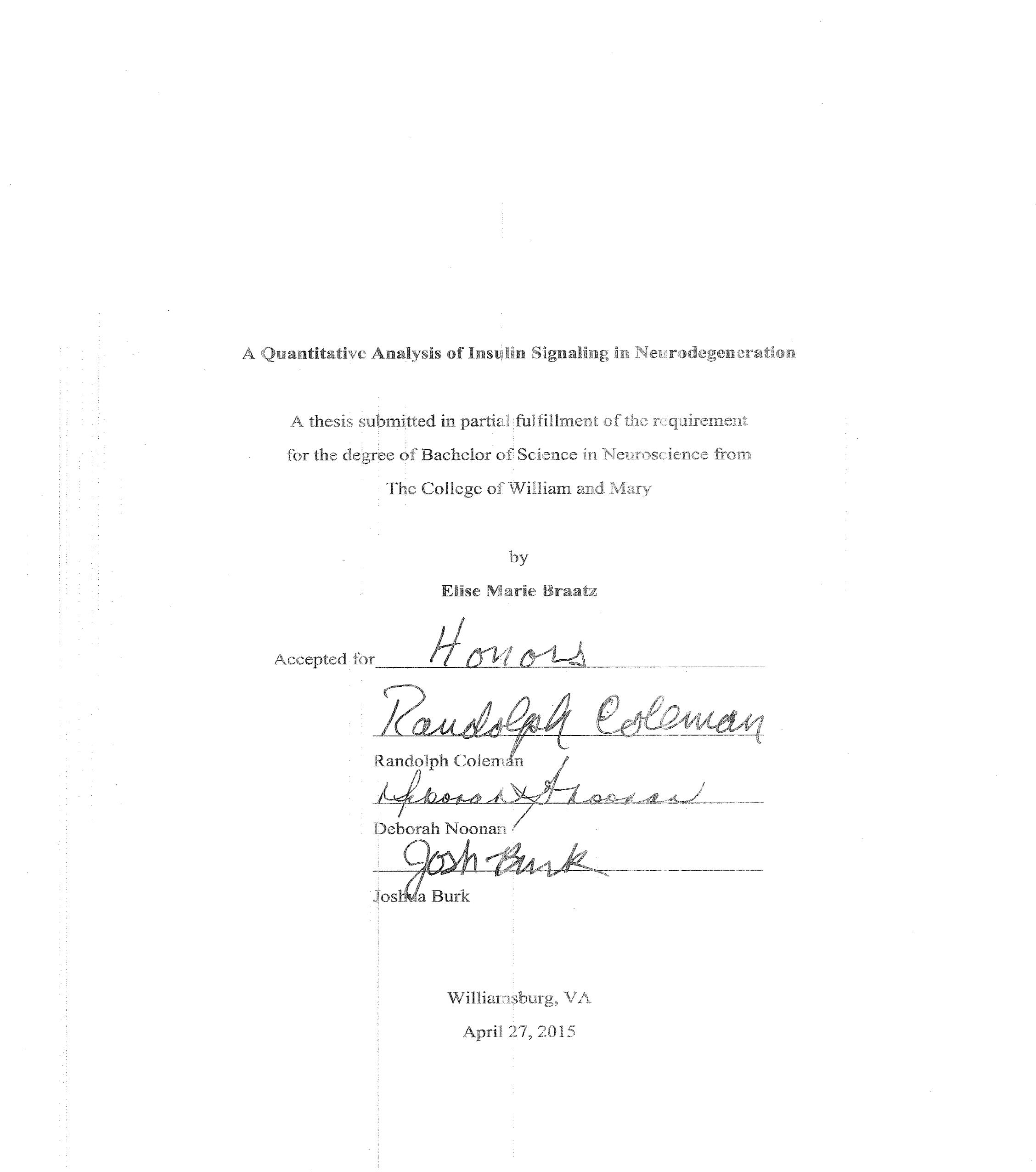 Abstract
This project introduces two mathematical models representing the biochemical interactions between insulin signaling, PD, and AD. The models can be used to examine the changes that occur over the course of the disease as well as identify which processes would be the most effective targets for treatment. The models are mathematized using Biochemical Systems Theory. They incorporate treatment strategies that includes several experimental drugs along with current treatments. In the past, BST models of neurodegeneration have used Power Law Analysis and Simulation to model the system. This work recommends the use of MATLAB instead. MATLAB allows for more flexibility in both the model itself and in data analysis. Previous BST analyses of neurodegeneration began treatment at disease onset. As shown in these models, the outcomes of delayed, realistic treatment and full treatment at disease onset are significantly different. The delayed treatment strategy is an important development in BST modeling of neurodegeneration. It emphasizes the importance of early diagnosis, and allows for a more accurate representation of disease and treatment interactions. 1. Introduction
PD is a neurodegenerative disorder characterized by dopaminergic neuron death in the substantia nigra pars compacta and results in physical symptoms such as tremors, rigidity, and bradykinesia as well as psychological symptoms such as an increased risk of dementia, depression, and anxiety. Insulin resistance, a precursor of T2DM, is a result of a diet high in fats and sugars. Insulin signaling pathways and PD pathogenesis have been experimentally proven to converge (Morris et al., 2008; Morris et al., 2011), yet clinical data is inconsistent (Bosco et al., 2012). The model includes production of ROS and RNS, p38 phosphorylation, tau protein hyperphosphorylation, inflammation, and dopamine synthesis, degradation, and transport. This paper presents a mathematical model that details the interactions between these processes and how they can combine to influence neuronal death. AD is an age-related neurodegenerative disorder affecting many brain regions, notably the cholinergic neurons in the hippocampus, which are correlated to the cognitive decline characteristic of AD (Kerbler et al., 2015). Insulin resistance in AD is much more accepted than in PD. Both a lack of insulin in the CNS, similar to T1DM, and a lack of CNS insulin receptor sensitivity, similar to T2DM, have been associated with AD, leading some to suggest that AD should be known as "type-III diabetes" (de la Monte et al., 2014). This paper presents a model of the pathways shared between insulin signaling impairment and AD within cholinergic neurons, astrocytes, and microglia. The data presented focuses on changes in insulin signaling, inflammation, ROS production, mitochondrial dysfunction, Ca2+ signaling dysregulation, neurofibrillary tangle production, Aβ oligomerization, p38 activation, and finally cell death. These disease simulations makes use of a modeling strategy know as BST, which was established by Savageu in 1969 and developed further by Voit in 2000. BST uses ODEs to model changes in reaction rates and species concentrations throughout the progression of the disease. These models include a baseline state, which depicts a healthy cell, a disease state, modeling a cell with PD and insulin resistance, and a treatment state, which is a disease state cell including several treatment options. The disease state was created by activating trigger points within the baseline model that initiated disease development, and the treatment state was created by introducing a mixture of drugs at two times: the onset of the disease, and halfway through the disease progression. These treatments target reactions the models show are important in neurodegenerative pathogenesis where it converges with insulin signaling pathways. 2. Methods
2.1 Modeled Pathways in PD This section explains several key pathways in the model, demonstrating the extent to which insulin signaling influences the biochemistry of PD. The system was modeled using the biochemical pathway visualization program CellDesigner. 2.1.1 Insulin Signaling and Inflammation Insulin signaling begins with insulin binding to the insulin receptor on the cellular membrane, which causes phosphorylation of the insulin receptor substrate (Takahashi et al., 1996). Insulin signaling is promoted by PPARG, which is also a transcription factor for proteins important in antioxidant scavenging and mitochondrial repair (Miranda et al., 1999; Mudo et al., 2012; Xing et al., 2007). Insulin signaling is inhibited by the chronic inflammation present in PD. The inflammation is a result of cytokine production in astrocytes and microglia, specifically cytokines IL-1β, IL-6, TNFα, and MCSF (Ghosh et al., 2007; Glass et al., 2010). Overproduction of NO promoted by nitric oxide synthase (Hunot et al., 1996), prostaglandin synthesis promoted by COX2 (Xing et al., 2007), and NF-κB in the neuron and glia are also contributing factors. Inflammation is decreased by the presence of PPARG (Ricote et al., 1998). This process is outlined in Model 1. 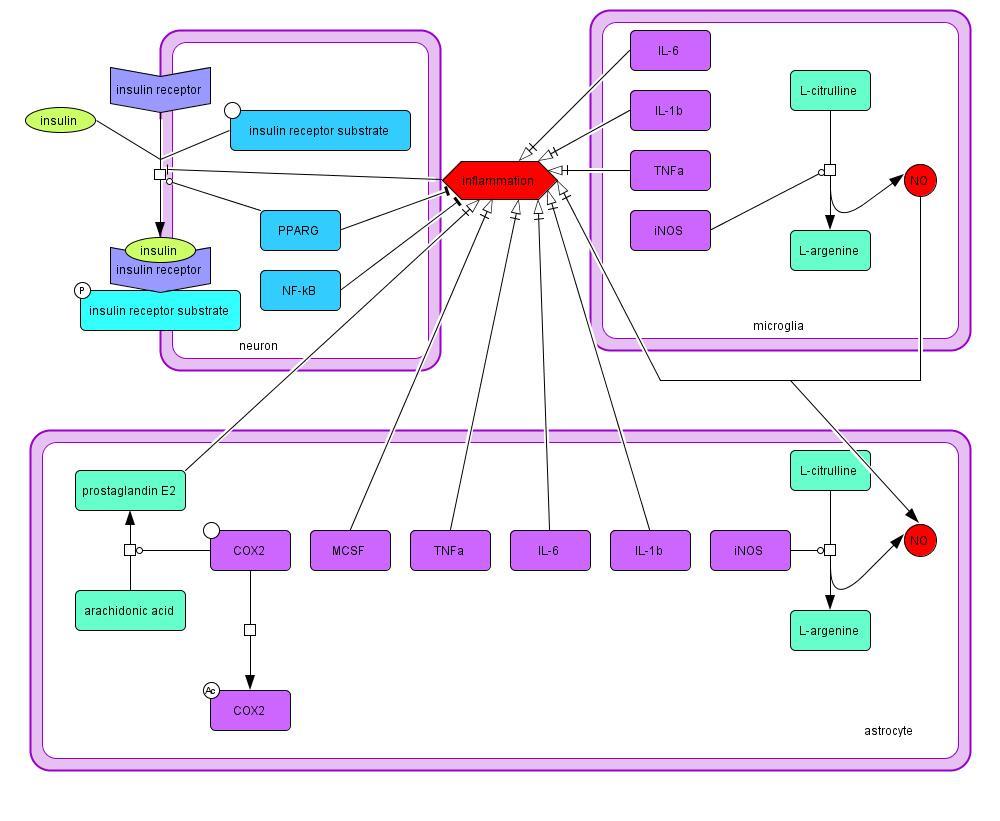 Model 1: Mechanisms of inflammation and factors influencing insulin signaling in PD
2.1.2 Dopamine Dopamine is produced in the neuron through the conversion of tyrosine to L-DOPA, and L- DOPA to dopamine (Model 2). Tyrosine hydroxylase, which is activated via phosphorylation by phosphorylated p38, promotes L-DOPA synthesis, and decarboxylase promotes the final step in the process to produce dopamine (Yu et al., 2005). Dopamine can also enter the cell through the dopamine transporter, which is upregulated by insulin signaling (Patterson et al., 1998). Free dopamine in the cell can be degraded into quinones, H2O2, and O2- (Yu et al., 2005), or use a 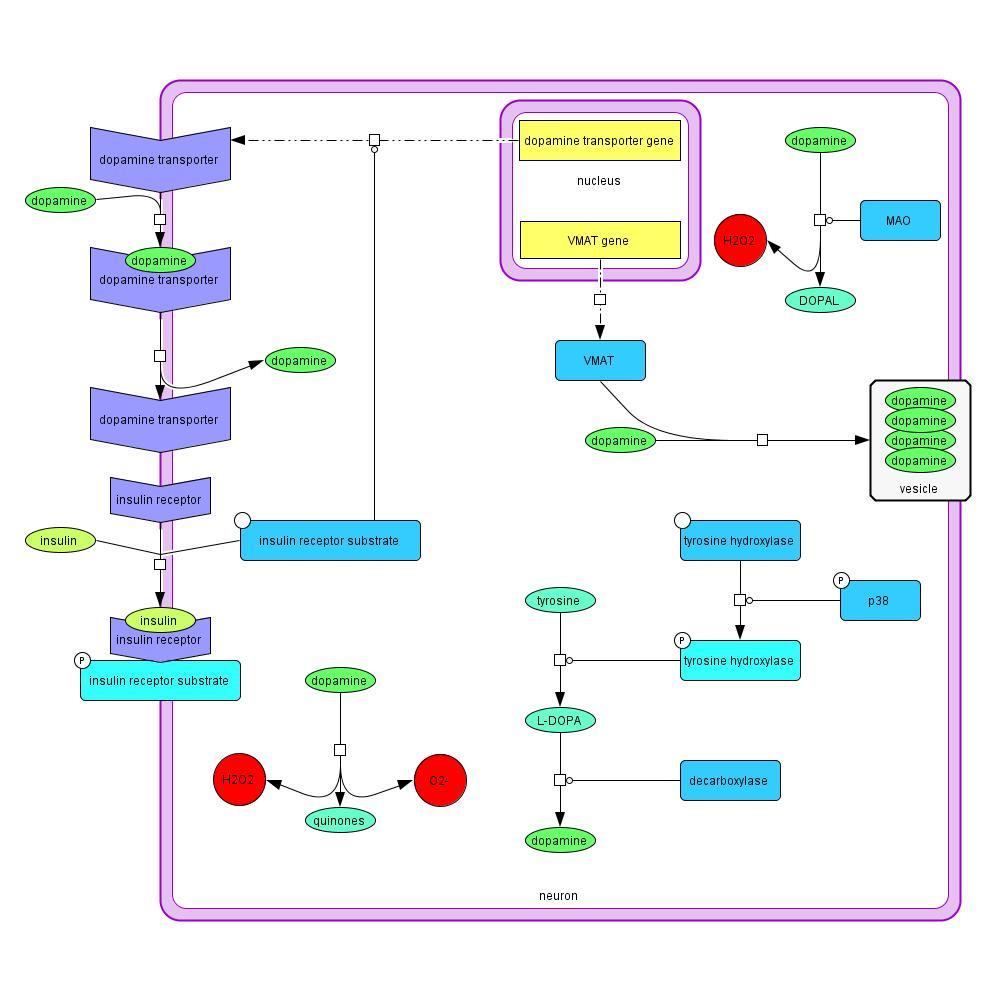 monoamine oxidase promoter, producing H2O2 and DOPAL (Marchitti et al., 2007). Alternatively, dopamine is collected into vesicles to be released at synapses. Vesicular dopamine is protected from degradation and the resulting production of ROS. VMAT are important in sequestering the dopamine into vesicles. VMAT is downregulated in PD (Xiong et al., 2011). Model 2: Reactions and cellular processes involving dopamine in PD 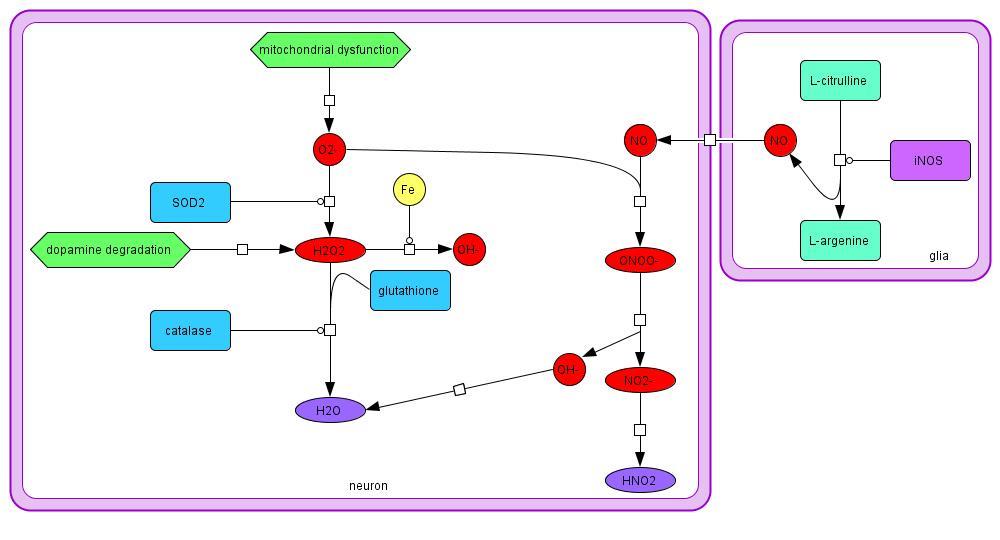 2.1.3 ROS and RNS ROS are the result of dopamine degradation and mitochondrial dysfunction in PD. Mitochondrial dysfunction creates an excess of O2-, which can be converted to H2O2 by SOD2. The H2O2 can then be converted to water by glutathione or catalase (Evans et al., 2002), or OH- by Fe through the Fenton reaction. Dopamine degradation also produces H2O2 and O2- in the cell. NO, a RNS, is produced in both the neuron and the glia from L-citrulline, and is membrane-permeable (Hunot et al., 1996). The NO can react with O2- to create ONOO-, which is extremely dangerous to the neuron (Beckman, Crow, 1993). Excessive ROS and RNS can react easily with vital cellular species causing lipid peroxidation, misfolded proteins, DNA damage, and endoplasmic reticulum and mitochondrial stress, all of which decrease cellular function and increase the risk of cell death. ROS and RNS can also trigger the caspase cascade, initiating apoptosis (Choi et al., 2004; Ko et al., 2005). Model 3: Synthesis and degradation of reactive oxygen and nitrogen species in PD 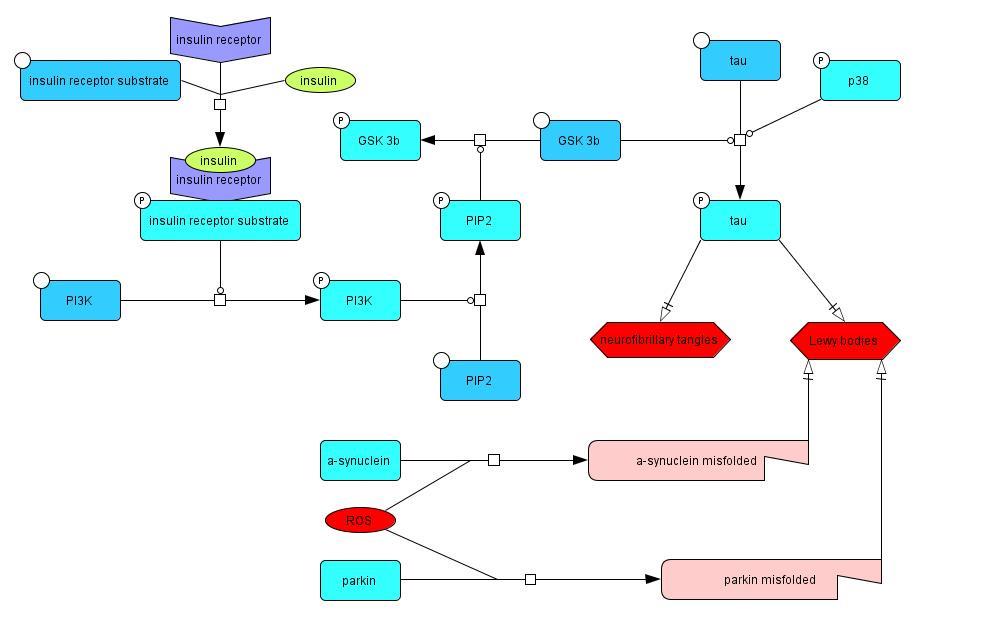 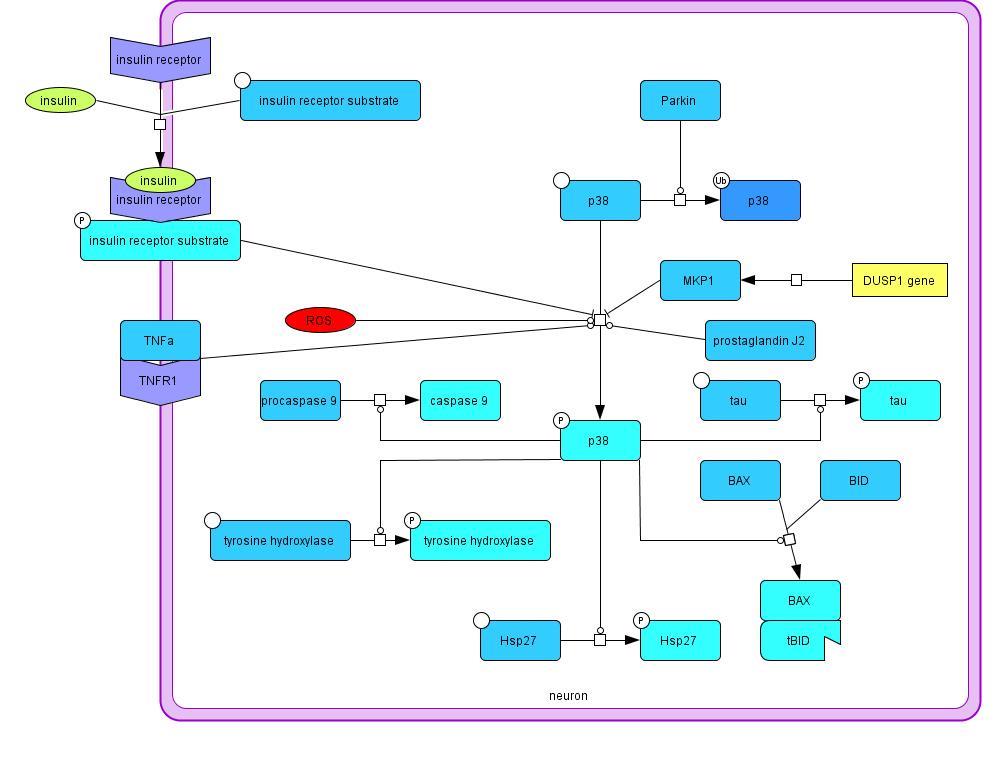