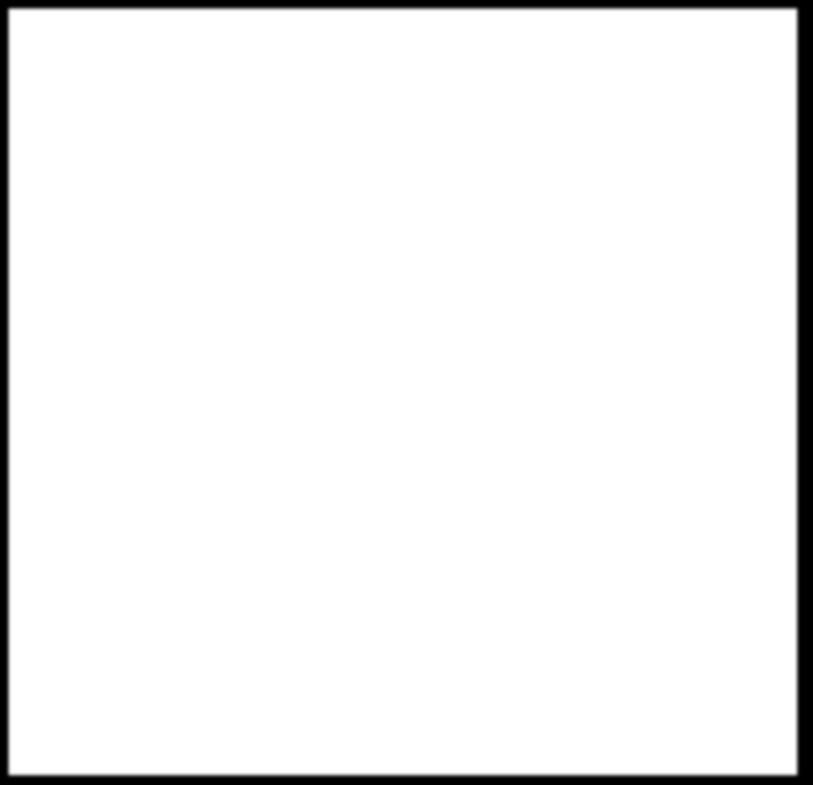 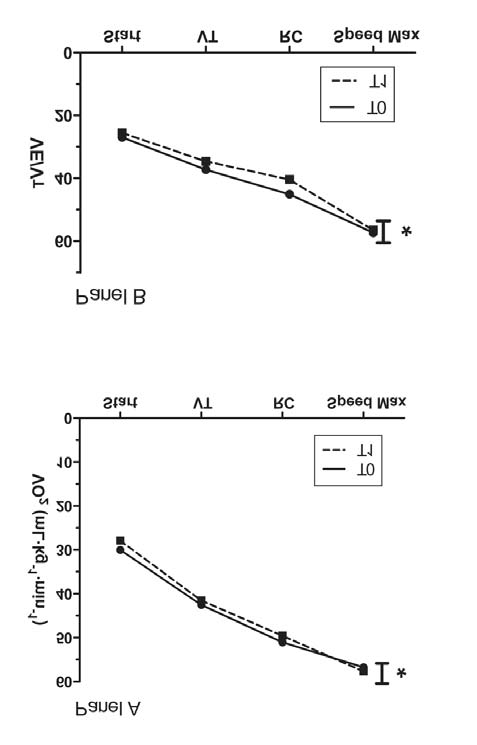 Bernardi et al. (2014) at 90 W) until a dyspnoea Borg score of 8/10 was reached; then between RMT and CON at T1 shows a significant difference in the final acceleration started (1 rpm corresponding to 9 W every MIP improvement and in MVV (unpaired T-Test, P = 0.03 and P = 20 s) until exhaustion. Endurance respiratory muscle training
Endurance Respiratory Muscle Training
The training protocol lasted for five weeks and was performed According to the training program all athletes performed by means of a Spirotiger® (MVM, Linate, MI, Italy), consisting of a RMET for 20 min daily, seven days a week, for five weeks. They hand-held unit with a pouch and a base station. A two-way piston started RMET with the following average work load: volume of valve connected to a rebreathing bag allows a constant isocapnic the bag of 3.45 ± 0.37 l, respiratory rate 23 ± 1.4 b·min-1. At the end-tidal CO fraction [24] to be maintained.
end of the training period the volume of the bag didn't change, respiratory rate increased: 29.6 ± 2.1 b·min-1 (+28%, P<0.001) The use of the instrument and the software, the assembly corresponding to a ventilation of 102.5 ± 13.1 l·min-1, roughly the of the various components and the hygiene standards were same ventilation measured at RC point during incremental test explained to the subjects. (106.8 ± 0.3 l·min-1 and 98.2 ± 0.5 l·min-1 respectively for running Before starting the protocol the subjects underwent four and cycling).
supervised training sessions to learn the technique and to define Maximal incremental tests
the appropriate size of the bag and the respiratory rate. While performing the RMET, the athletes wore a nose clip to ensure that During both cycling and running tests, the subjects in the they were breathing through the training device only.
RMT group show a higher exercise capacity: wattage and speed The volume of the bag was initially set at a value corresponding to 60% of the subject's vital capacity. The RR was progressively increased in order to reach the same ventilation measured at RC point during the incremental test (roughly corresponding to 50% of MVV). The subjects trained for 20 min daily, seven days a week, The compliance to home-based training was evaluated by a Subjects were required not to change their daily training and diet during the study.
Statistical analysis
Data are reported as mean ± standard deviation (SD). The unpaired T-test was used for comparison between RMT group and CON group parameters at T0 and T1. The 2-way ANOVA test was used to evaluate the effect of training on the anthropometric parameters, pulmonary function, and ventilatory pattern and VO 2 trend during the tests; the P values were adjusted according to the Bonferroni correction. Comparison between groups at different points (after the warming up, at VT point, at RC point and at maximum load) was performed by using repeated-measures analysis of variance (mixed model). The parametric Pearson correlation coefficient was used to describe the relationships between variables: MIP vs VE and VE vs VO . Statistical significance was accepted at P≤ 0.05.
All the analyses were performed using GraphPad Prism 40. General characteristics of the subjects in the RMT and CON groups are summarized in (Table 1). They had similar experience in cycling and running and had similar VO peak at T0 (unpaired T-test, P>0.05), (Table 1).
Figure 1 The oxygen consumption trend (VO2, Panel A) and
ventilatory pattern trend (VE/VT, Panel B) in RMT group during Pulmonary function tests
running test before (T0) and after (T1) RMET. * ANOVA test between T0 and T1, P<0.05.
No difference is found in FEV and FVC in both groups while in Mean value after warming up (start), at ventilatory threshold (VT) RMT group, but not in CON, a significant increase in MIP and MVV point, at respiratory compensation point (RC) and at maximum load is shown (P = 0.03, 2-way ANOVA); (Table 1). The comparison reached at T0.
Ann Sports Med Res 1(1): 1003 (2014) 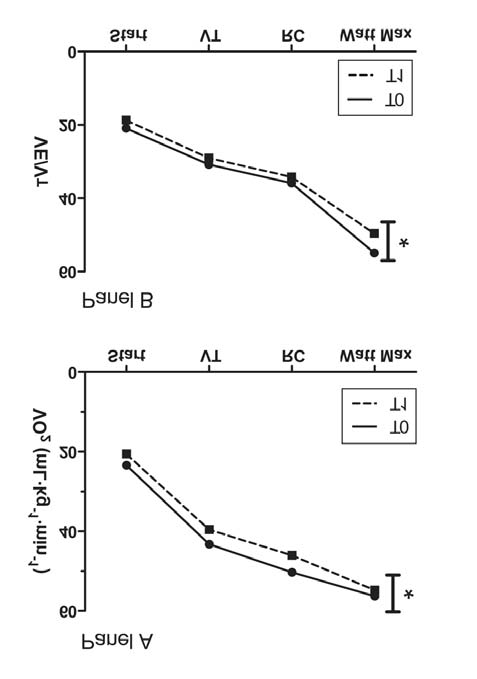 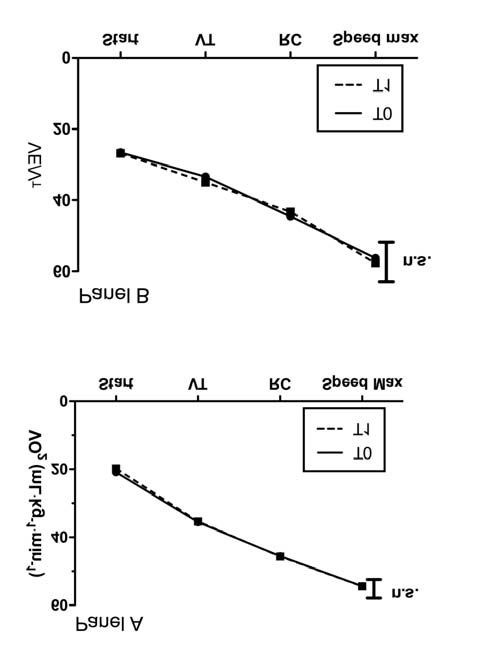 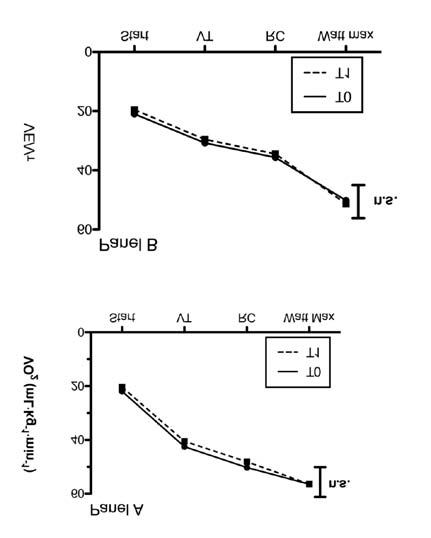 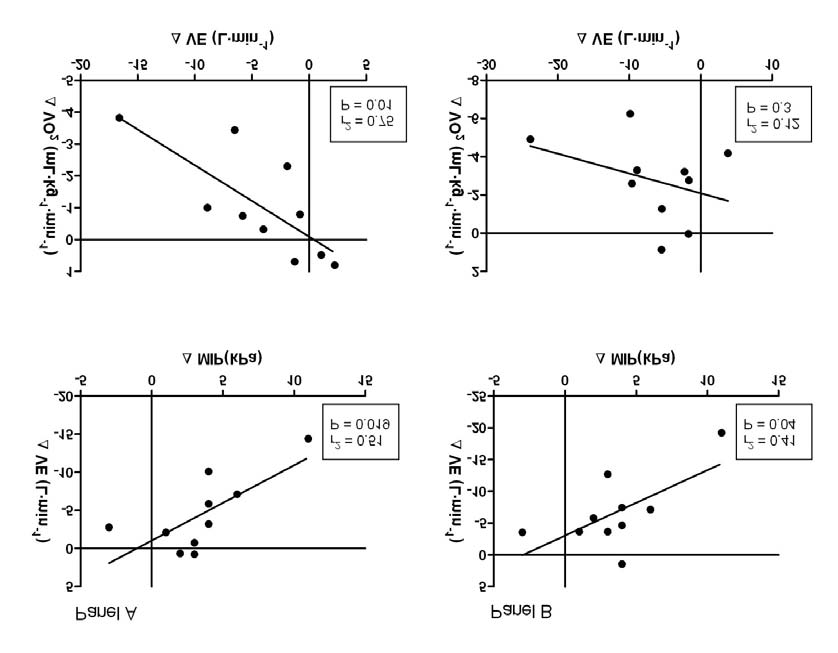 Bernardi et al. (2014) Figure 5 The oxygen consumption trend (VO2, Panel A) and ventilatory pattern trend (VE/VT, Panel B) in CON group during cycling test before (T0)
and after 5 weeks (T1). ANOVA test between T0 and T1. Mean value after warming up (start), at ventilatory threshold (VT) point, at respiratory compensation point (RC) and at the maximum load reached at T0.
Figure 5 Panel A running, panel B cycling. Upper panels: Correlation between the change in minute ventilation (ΔVE) and the change in maximal
inspiratory pressure (ΔMIP). Lower panels: correlation between the change in oxygen consumption (ΔVO2) and the change in minute ventilation (ΔVE) before and after RMET.
Ann Sports Med Res 1(1): 1003 (2014) Bernardi et al. (2014) Table 2: Exercise performance during maximal incremental tests before and after training in RMT and CON group.
Load max (km·h-1)
17.8 ± 1.4§
Load at VT (km·h-1)
Load at RC (km·h-1)
VO peak (ml·kg-1·min-1)
HR max (bpm)
VE max (l·min-1)
RR max (b·min-1)
Load max (W)
395 ± 98§
Load at VT (W)
Load at RC (W)
VO peak (ml·kg-1·min-1)
HR max (bpm)
VE max (l·min-1)
RR max (b·min-1)
Data are represented as mean ± SD. * Statistical significance (ANOVA test) from T0 to T1, P<0.05. § Statistical significance (unpaired T-test) from T0 to T1 between RMT group and CON group, P<0.05.
Abbreviations: RMT, respiratory muscle endurance training group; CON, control group; T0, baseline evaluation; T1, after five weeks. VT, ventilatory threshold; RC, respiratory compensation point; HR max, maximum heart rate; VO peak, peak oxygen consumption; VE max, maximum ventilation; RR max, maximum respiratory rate; VE/VO ventilatory equivalent of VO .
As regards VE/VT we observe a different response to exercise of breathing and different breathing strategies during cycling and between running and cycling. This is in line with the literature running can play a role.
[17]. In fact, cycling and running are characterized by a different In this study we also show that, after five weeks of RMET, the breathing pattern, ventilatory efficiency and mode of increase exercise capacity of amateur triathletes significantly improves in ventilation. According to Kalsas and Thorsen [16], cycling as demonstrated by the higher workload reached during both is characterized by a steeper rise in VT and sharper curvature incremental tests. Despite the increase in maximal workload, of VE/VT, implying that VT max is achieved at a lower VE. Our no difference in VO peak is found after RMET and this result is results are similar to those reported in literature. At baseline we consistent with previous data. As reported by Illi et al [7], only found a different VE/VT during the two tests. RMET reduces the in two studies out of 22 was a significant change in VO max ventilatory response for identical exercise tasks and induces the after RMET observed [12,24]. This could be due to the fact that adoption of a more efficient breathing pattern characterized by a RMET involves a small group of muscle (only respiratory) while lower respiratory rate. This is true for both exercises: in fact, the to improve the VO max a large group of muscle must be trained. differences between running and cycling remain significant.
So, there should be no reason to observe a significant change in As for VE/VO , at baseline we found a better ventilatory the central cardiocirculatory response and O tissue utilization efficiency in cycling (lower VE/VO ). After RMET, VE/VO after RMET as pointed out by Markov et al [27]. Even if the VO2 significantly improves only in running, erasing the difference peak does not change significantly, the VO trend during both incremental tests shows a significant improvement. The less O between the two types of exercises. required to perform the same workload reflects the fact that an Moreover, only in running is the reduction in ventilation improvement in respiratory efficiency has been shown.
significantly related to the reduction in VO . We can therefore say Interestingly, no change in both ventilatory threshold that the effect of RMET in running is almost completely due to and respiratory compensation point is found as if respiratory the increase in strength and resistance of respiratory muscles, as muscle training improves the ability to sustain exercise beyond confirmed also by the strong correlation between the increase in anaerobic threshold. MIP and the reduction in ventilation. This study has some limitations. The major limitation is the This is not completely true for cycling. In fact, during this type lack of either an endurance exhaustive constant-load test or time- of exercise the reduction in ventilation is significantly related to trials at different intensities; this is due to the fact that our aim the increase in MIP but not with the lower VO . The explanation was the evaluation of the effect of RMET on respiratory function of this result can be only speculative. According to previous and breathing pattern during maximal exercise tests. Another papers [25,26], we might hypothesize that different entrainment limitation is that the control group is not a placebo group: Ann Sports Med Res 1(1): 1003 (2014) Bernardi et al. (2014) in fact they did not perform breathing exercise (i.e. a "sham" In conclusion, respiratory muscle endurance training increases respiratory muscle strength and changes the breathing pattern during exercise toward a more efficient one characterized by a lower respiratory rate. After the training the athletes can tolerate a higher workload enhancing the exercise performance.
20. Trooster T, Gosselink R, Decramer M. Respiratory muscle assessment, in: Gosselink R., Stam H., Lung function testing. European Respiratory Monograph. 2005; 4, 57-71.
22. Conconi F, Borsetto C, Casoni I, Grazzi G, Guglielimni C, Manfredini F, et al. The methodology of the "Conconi test". Oster J Sportmed. 1992; Cite this article
Bernardi E, Melloni E, Mandolesi G, Uliari S, Grazzi G, et al. (2014) Respiratory Muscle Endurance Training Improves Breathing Pattern in Triathletes. Ann Sports Med Res(1): 1003. Ann Sports Med Res 1(1): 1003 (2014)