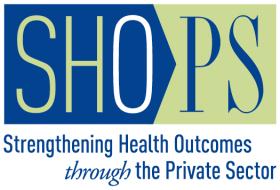 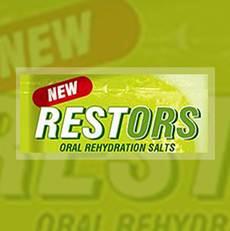 • In 2007 the POUZN project, implemented by Abt Associates Inc. and PSI, collaborated with the government of Benin to introduce OraselZinc into the marketplace through private sector channels. Orasel Zinc is a diarrhea treatment kit containing ten 20 mg tablets of zinc sulfate and two sachets of orange flavored low osmolarity ORS. It is the only zinc product for diarrhea treatment available in Benin. • In Uganda, the AFFORD project, implemented by Johns Hopkins Center for Communication Programs in partnership with the Uganda Health Marketing Group (UHMG), launched the Zinkid (zinc tablets) and Restors (ORS sachets) products for diarrhea treatment in 45 AFFORD project districts. The government of Uganda offers a separate zinc product supplied by UNICEF for public facilities. • Caregiver survey – multi-stage sampling approach • In Benin, survey carried out in 8 communes, distributed among the 7 project departments while in Uganda, survey was carried out in a sample of 20 districts randomly selected from the 45 UHMG project districts. • 392 caregivers were selected from 3,196 sampled households in Benin and 803 out of 3,425 caregivers sampled were selected in Uganda. Participants were selected through door-to-door screening, data were collected on one child under five (aged 0-59 months in Benin and 6-59 months in Uganda) with diarrhea in the 2 weeks preceding the survey. • Provider survey • Conducted in same areas as household surveys. • Convenience samples of providers were selected. In Benin, a total of 60 public and private sector providers were interviewed (30 pharmacy agents and 30 nurses/midwives). In Uganda, 71 public and private sector providers were interviewed (44 doctors/clinical officers/nurses and 27 chemists/pharmacists). 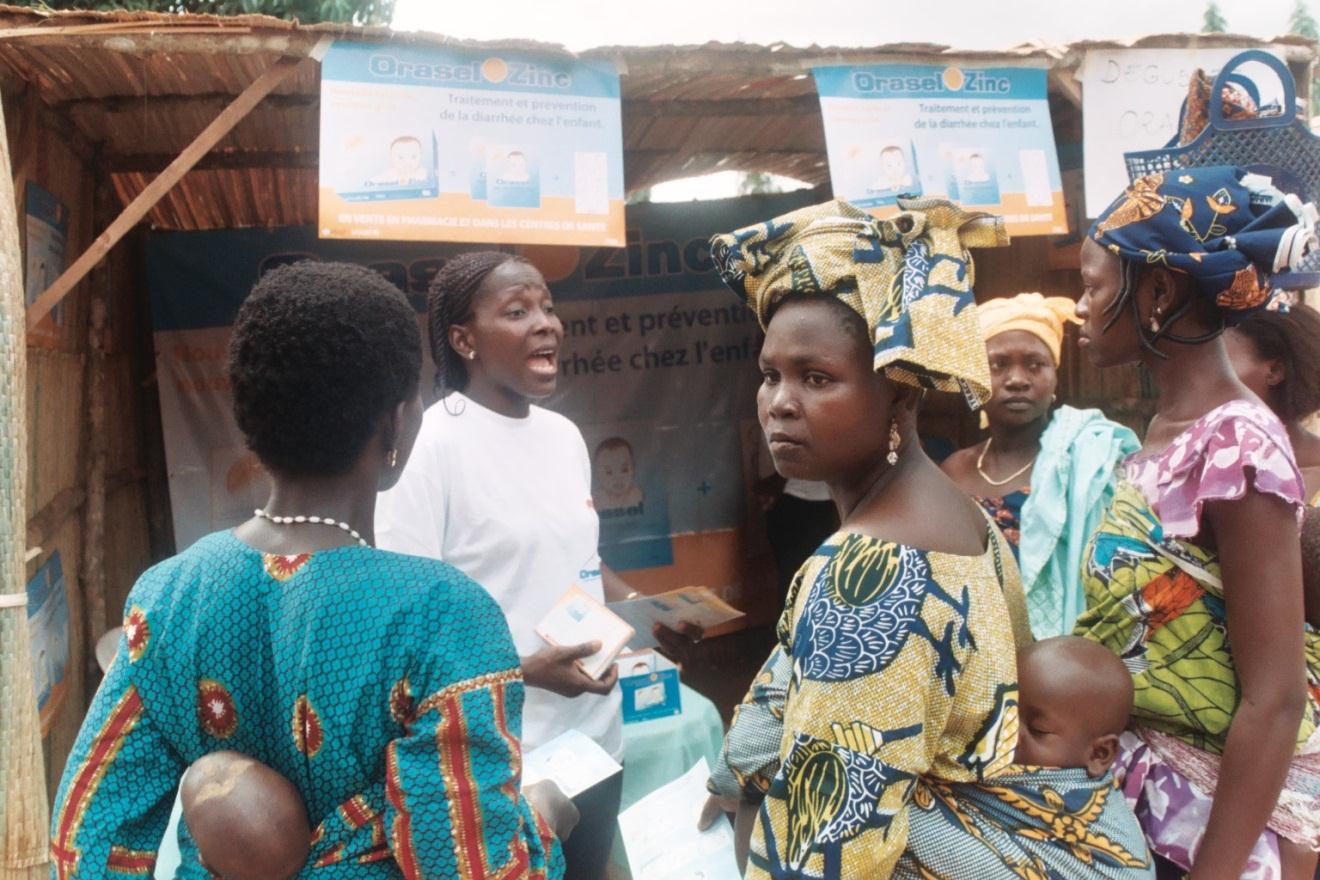 Caregiver Knowledge, Attitudes and Practices Zinc use rates were substantially different in
Benin and Uganda.

No treatment
% of all children Benin % of all children Uganda Correct use of zinc with ORS was high in both countries Diarrhea Treatment Using Zinc Among Children Under
Uganda caregivers Treated with zinc also treated with treated for full 10 Inappropriate treatments were widely used, and many
times given in conjunction with zinc
Children with complicateddiarrhea Children with uncomplicateddiarrhea Antibiotic *
Respondents may report multiple choices so the sum may exceed 100%; Complicated diarrhea is 7 diarrhea with fever, a bloody stool, or both. *Statistically significant at p<0.05 Health providers in both the public and private sectors are
main sources of zinc and play an important role in
encouraging initial use of zinc.
• Public health clinics were the primary source of zinc (43 percent in Uganda and 56 percent in Benin). The private sector was the second largest source: in Benin 37 percent of caregivers received zinc from pharmacies or private clinics/sellers, while in Uganda 35 percent of caregivers received zinc from private clinics/sellers. • Many caregivers who treated with zinc were first time users (70 percent in Uganda and 42 percent in Benin). Most first-time zinc users in both countries said that they used zinc because it was recommended by a provider (85 percent in Uganda and 67 percent in Benin). Zinc use was associated with better perceptions of price and access to products % agreeing with statement
Drug stores nearby always have
zinc for sale
Zinc treatments are difficult to get
around here
There is a place nearby where you
can get zinc when your child needs
Don't know where to get zinc
Zinc treatments are too expensive
Zinc treatment products are
available within walking distance of
your home
Total number of caregivers
*Statistically significant difference between users and non-users of zinc (p<0.005) note: not all zinc users answered these questions Caregivers hear zinc messages from a variety of sources,
and recall of messages about zinc is strongly associated
with zinc use.
Heard message about Did not hear message Heard Orasel Zinc Did not hear Orasel Zinc Statistically significant different between zinc users and non-users in both countries (p<0.000). 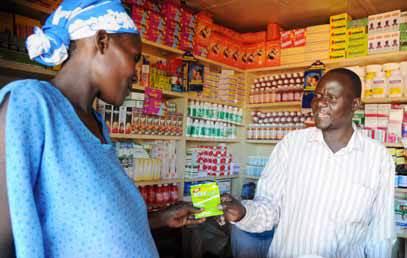 Provider Knowledge, Attitudes and Practices Inappropriate co-prescription of antibiotics with zinc/ORS
was high in both countries.

Primary treatment recommended for childhood diarrhea (1st recommended)
• In Benin, over half (58 percent) of providers that recommended Orasel Zinc as a primary treatment also recommended a second treatment with an antibiotic (Flagyl) • In Uganda, of the few providers that primarily recommened zinc (or zinc plus ORS), half also recommended co-treatment with antibiotics. Caregiver requests may influence provider diarrhea treatment behavior. • Most providers report that caregivers request specific • In Benin, providers said the most common treatments requested by caregivers were ORS (84 percent), Orasel Zinc (50 percent), and antibiotics (36 percent). • In Uganda antibiotics (58 percent) and antidiarrheals (40 percent) were the most requested treatments. • 65 percent of providers who recommended antibiotics/antiparastics (including Flagyl/metronidazole) as their primary diarrhea treatment also stated that caregivers commonly requested antibiotics. • When asked their reasons for not recommending zinc, 21 percent said it was because "caregivers prefer antibiotics." Provider knowledge and attitudes about zinc are inconsistent. given with Flagyl diarrhea subsides Provider knowledge and attitudes about zinc are inconsistent. What would motivate a provider to recommend zinc? • Providers who had ever recommended zinc said it was because "it is the most effective treatment for childhood diarrhea" (75 percent in Benin and 77 percent in Uganda). • When asked what it would take for them to recommend zinc plus ORS as the primary treatment for diarrhea, most said: "knowing zinc is an effective treatment for diarrhea" (92% in Benin and 76% in Uganda). • In Benin, 80 percent of providers also said that "knowing that zinc is a safe product" would be convincing, and in Uganda 45 percent said it would help to have "information about the merits of zinc over antibiotics/antidiarrheals" • Data suggests that although providers recall this message they are still not entirely convinced of zinc's effectiveness. Providers are aware of zinc and learn about zinc through multiple channels • In both countries, most providers (86-88 percent) said they had heard of zinc as a treatment for diarrhea. • The largest percentage of providers (75 and 47 percent respectively) said they had learned about zinc via television or radio, followed by medical/drug representatives (53 and 25 percent) and continuing medical education sessions (49 and 36 percent). • Most providers recalled a message that zinc was an "effective treatment for diarrhea" (69 and 78 percent) followed by it "reduces duration/severity of diarrhea" (62 and 33 percent). Training in diarrhea management did not appear to
influence diarrhea management knowledge and practices.
Benin Providers
Look for danger Heard of zinc Training in diarrhea management did not appear to
influence diarrhea management knowledge and practices.
Uganda Providers
diarrhea treatment Perception of price and availability of zinc products in stock are associated with prescribing behavior • Nearly all providers in Benin and Uganda (96-97 percent) carry products for childhood diarrhea treatment. Far fewer (68 and 41 percent respectively) stock/sell diarrhea treatment products containing zinc. • No providers in Benin were concerned about price of zinc. However, half (50 percent) of providers in Uganda who sold zinc products were concerned about the pricing. Most (75 percent) were concerned that the retail price was too high. Providers reported the retail price of zinc as between UGX 2,000 and 3,000 (USD $0.82 - 1.23) per 10 tablets. • Full course of treatment with Flagyl is 1,500 UGX (USD$0.60) for 3 tablets x 5 days. Conclusions and Lessons Learned 1. Co-packaging of zinc and ORS may increase correct use of zinc with ORS, but only in certain environments. 2. Widespread message dissemination is key to increasing use of zinc; however, more precise messaging is needed around the correct use of diarrhea treatment products. 3. Providers may play a critical role in driving use of the right (as well as the wrong) treatments for childhood diarrhea. 4. Efforts to address supply side drivers of zinc use including appropriate pricing and widespread availability of zinc products must accompany demand generation efforts.

SHOPS is funded by the U.S. Agency for International Development.
Abt Associates leads the project in collaboration with

MENTAL HEALTH LAW CENTRE (WA) Inc. ABN 40 306 626 287 Our Ref: SB NCW 572 6 March 2012 Mental Health Commission GPO Box X2299, Perth Business Centre WA 6847 DRAFT MENTAL HEALTH BILL 16 DECEMBER 2011 Mental Health Law Centre (WA) Inc. SUBMISSION PHYSICAL AND DENTAL HEALTH OF INVOLUNTARY PATIENTS AND PRISONERS We take this opportunity to make a submission on the Draft Mental Health Bill released for public comment on 16 December 2012. General Position The Bill authorises a single "authorised mental health practitioner" (not necessarily a doctor and perhaps simply an enrol ed mental health nurse with two days training in making referrals) to assess/ examine, refer, detain and transport a person against their wil and without their consent, to a psychiatrist (sometimes thousands of kilometres away from the patient's home) for an examination to decide whether or not that person requires detention (involuntary admission to an authorised psychiatric hospital or hostel) and/or involuntary treatment; and authorises the examining psychiatrist (who may or may not have trained in Australia) to make an involuntary detention and/or treatment order sometimes on the basis of a hurried five minute examination. Mistakes and oversights happen in a busy, under-resourced system whose priority and objective is treating a person's mental illness. Physical and dental il health may be the underlying cause of mental il -health – such as urinary tract infection in elderly people causing psychosis, may impede recovery from mental illness and may be low on the agenda of mental health