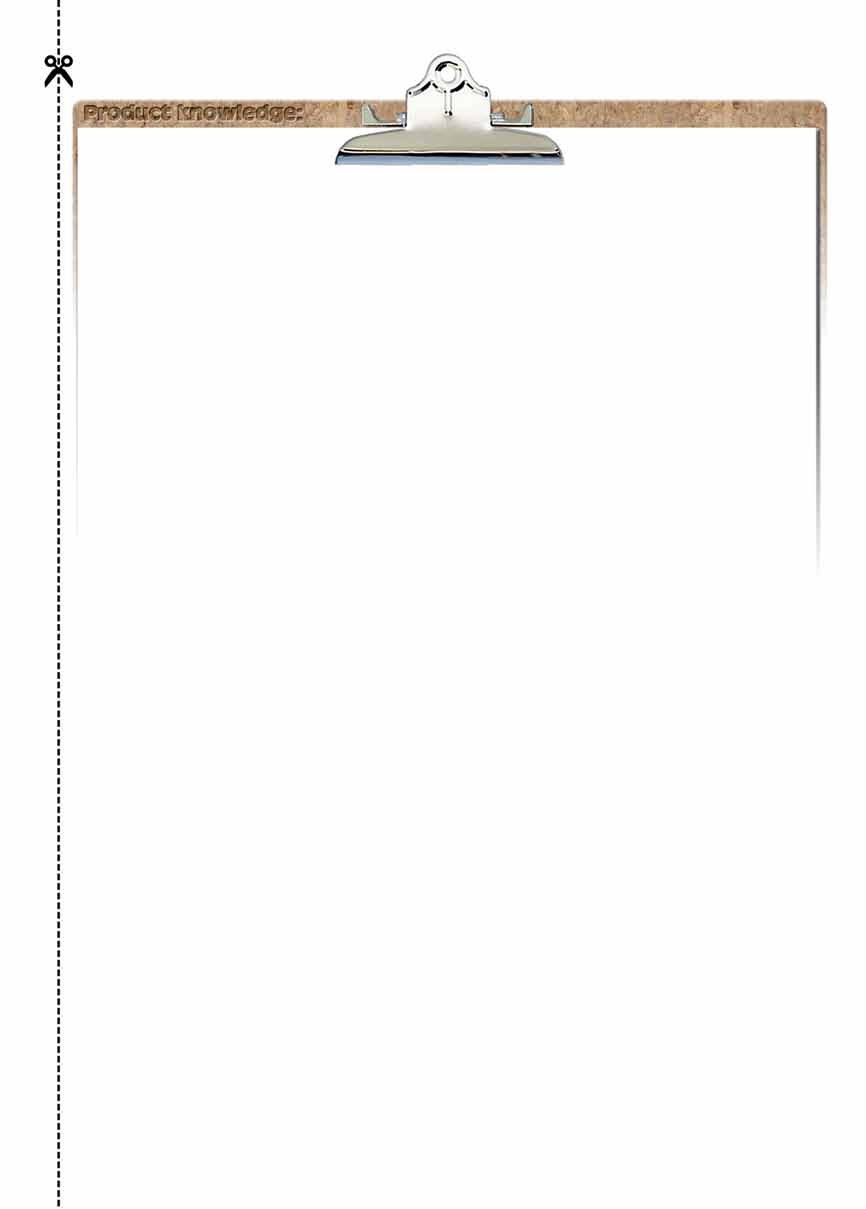 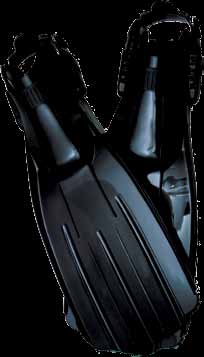 Visit Sports Trader's website for more product knowledge: www.sportstrader.co.za A closer look at diving fins Our cut-out-and-keep series to • "Bigger fins are like riding a bike in the high- assist retailers with product Although Leonardo da Vinci is said to have scribbled down some ide-as for artificial flippers, it was a est gear — you go further on each pedal French Navy lieutenant command- stroke, but it's much harder on your legs," er, Louis De Corlieu, who is cred- explains Rhys Couzyn of Scuba Equipment ited with inventing the first diving fins, back in Words: MARK JOHNSTON. Compiled with
Africa, importers of Scubapro dive equip- 1914. From these early crude "swimming and the help of Rhys Couzyn of Scubapro,
rescue impulse devices", as they were called Chris Serfontein of Aqua Divers Interna-
• For this reason they're only really popular then, the design and materials have been tional, SA suppliers of Mares and Head
with free divers and spear fisherman, who steadily developed to give us the wide selec- diving equipment and Dion Sarrimano-
need to build up momentum with just a few tion of specialist swimfins available today. lis of AJF Agencies, the local agent for
kicks so they can descend quickly. While variety is good news for the customer, since there's a greater chance of finding the Paddle fin or split fin? right fin for their needs, it does put more pres- Forget what you've seen in 007 movies. Rec- sure on retail staff. reational diving isn't about chasing after Clearly, a high level of product knowledge is speargun-wielding frogmen; it's about taking essential to ensure that they don't make the it easy! The slower you move through the wa- mistake of recommending something that's ter, the less energy you expend, which in turn unsuitable. The trick, as with selling any piece means you suck less air. This is pretty much the of sporting or outdoor equipment, is to have a Holy Grail in diving: using less air means your solid understanding of the key design features, tanks last longer and you can spend more time and be able to match these with the custom- trying to find Nemo. While diving style plays er's specific needs. a huge role here, the design of the fins is also Let's take a closer look. Heel: open or closed? Significantly, it's essential to match the right fin with the customer's ability, allowing them Manufacturers categorise dive fins as either to get the best performance with the least open or closed heel, so it's logical to make this amount of effort. your starting point when helping a customer Paddle fins: With traditional paddle fins, the
choose a pair of fins. stiffness of the blade is the key factor. Which type you recommend to the customer • Stiffer fins provide more thrust in the water, will depend largely on where they plan to go giving you a better return on your kick. But the payoff is that you need strong legs; Open heel fins are just that — open at the • A weaker diver paired with fins that are too back — with an adjustable strap to keep your rigid will soon become tired, using more en- foot in place, much like a sandal. They are ergy and also running the risk of cramping. designed to be worn in conjunction with neo- • So for decades the sales pitch worked like this: beginner divers were sold fins with • The big advantage of wearing booties is heel model without first finding out what softer blades, while more experienced that they protect your feet, so they're the the customer's preference is.
divers bought ones that were stiffer. number-one choice for dive sites where "There's no right or wrong here," says Dion • The problem with this is that flexible fins people have to first walk across sharp Sarrimanolis of AJF Agencies, the local agent have very little power, so if the diver needs rocks or hot sand to get to the water.
for Cressi. "It's very much a personal choice." to move quickly (say in an emergency, or • Booties also provide much needed insulation when swimming against a strong current) in cold water sites (think Cape Peninsula or Blade: short or long? they end up running on the spot like a Loon- the West Coast).
Is bigger better when it comes to buying fins? ey Tunes cartoon character. Closed heel, or full foot fins, are more like Split fins: About ten years ago a completely
regular shoes. They're non-adjustable — i.e. • While it's true that longer blades will new design arrived on the scene: the split fin. are a fixed size — and are designed to slip generate more thrust, this doesn't mean • As the name suggests, the blade is literally snugly over the whole foot. Most divers wear they're automatically a ticket to better div- sliced in two, allowing each side to flex in- them on bare feet. ing performance. For one, longer fins are dependently. It's this propeller like action • Many divers prefer the snug fit and more more cumbersome — a boatload of divers that is supposed to give split fins the edge, streamlined design of closed-heel fins, so all trying to don long fins can get interest- providing more thrust with less energy ex- don't automatically recommend an open- ing! But the main factor is power. Or lack 2011 October/November :: Sports Trader 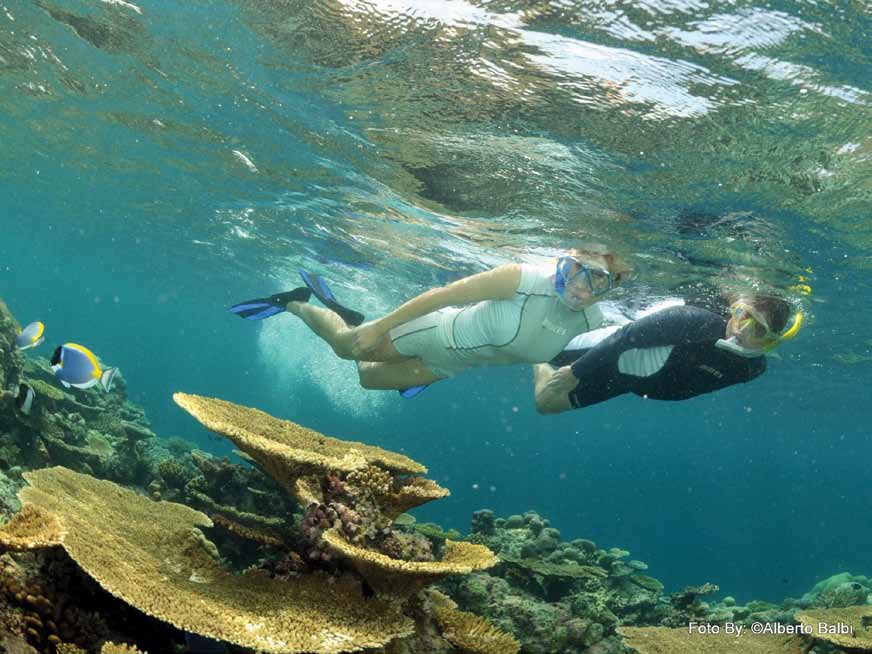 this in mind, manufacturers have looked at pendently from the foot, thanks to a hinge or Selling fins cont from alternative designs to provide divers with the flexible section at the end of the foot pocket.
right mix of performance and comfort. • The big advantage of this system, explains Dual-density construction: One approach
Couzyn (who developed Scubapro's pivoting that has proved highly successful is a dual- model, the Seawing Nova), is that a bigger • The market responded positively, with split density construction, as used on models such portion of the blade flexes to the correct fins coming out tops in numerous tests and as the Cressi Frog Plus and Mares X-Stream. angle of attack. "Regular paddle fins take • "Instead of building a blade of uniform stiff- on a gradually curved profile, with the ini- • But while they've proved a boon for re- ness, manufacturers use a composite con- tial portion of blade after the footpocket creational divers, especially weaker ones struction, with harder ridges running along not sitting at an optimal angle to gener- who benefited from the increased perform- the edges and a softer, more flexible mate- ate thrust. By condensing this curved sec- ance, not everybody is convinced. More rial in the centre," explains Chris Serfontein tion into an actual hinge or short flex-zone, experienced divers, in particular, complain of Aqua Divers International, the local agent a larger portion of the blade achieves the that manoeuvrability and acceleration are for Mares. The result is a fin that is more optimum angle of attack (45º)." This gener- still not on par with that of a good pair of forgiving on your legs when you're cruising ates more thrust per kick and reduces drag.
paddle fins.
along, but delivers more power when you • As yet this technology is still relatively new. kick hard.
And expensive! But with pivoting fins from Alternative solutions Hinged fin: Another new design that has
three different manufacturers taking the So while split fins still have their place, they're turned a lot of heads is the so-called hinged, top three spots in a recent ScubaLab shoot- definitely not the answer for everybody. With or pivoting, fin. Here the blade moves inde- out, they're definitely something to watch. New snorkel and diving ranges JuST IN time for retailers to stock up in order to kayakers or surfers wanting to keep their
The products are all designed in Italy by the to meet the high demand for snorkel and div- gear dry — Aqua Divers International has a Mares engineers who have over the years de- ing equipment during the December-January good selection of products for all watersport veloped comfortable technical solutions like holidays, suppliers are offering several inter- soft-touch silicone buckles, broad field of vi- esting new products that should appeal to Mares is one of the best known brands among sion in the masks, easy-purge and anti-splash holidaymakers cooling off in the water.
serious scuba divers and they have applied top-dry system in the snorkels and optimised their 60 years of experience in developing un- Aqua Divers International pivoting in the blade. The siliter used in the derwater equipment to produce a the exten- more affordable recreational mask skirts and From serious divers to snorkelers, swimmers sive Aquazone snorkeling range. mouthpieces are non-toxic and To p56 Ghilibi Mask Vento Mask Storm Mask Mistal Mask Seta Mask Pirate Mask
BK,BL,YL BL,PK,YL 60 years of experience
in Scuba Diving .
Ghilibi Set Seta Set
Storm Set Sharky Set Vento Set
Optimized Pivoting Blade
Soft Touch Silicone Buckles
. now available in the
MARES Aquazone
Aqua Divers International
T: 011 794 9444
F: 086 506 1220
Mistal Set
Marea Set
Pirate Set
Marea/Volo One Fin Frontier Fin
Explorer Fin Allegra Fin Fluida Fin Volo One Fin
27/28 - 34/35 L-M-S
36/37 - 46/47 L-M-S