Title: Occurrence of Pharmaceuticals, Hormones, and other Organic Wastewater
Contaminants in Cave Water within the Lower Neosho and Illinois River Basins,
Oklahoma

Start Date: 3/1/2006
End Date: 2/28/2007
Congressional District: District 3 (University), District 2 (Field Sites)
Focus Category: GW, NPP, WQL
Descriptors: Organic wastewater contaminants, cave streams, passive sampler
Principal Investigators: Joseph R. Bidwell, Department of Zoology, Oklahoma State
University
Publications: A manuscript that will be submitted to a peer-reviewed publication is
currently in preparation.
Problem and Research Objectives: The headwaters and upper basins of the Illinois
River and the eastern part of the Lower Neosho River are located in northwestern
Arkansas and northeastern Oklahoma. In Arkansas, this area is experiencing significant
urban development and is one of the most productive poultry producing regions in the
United States (Galloway et al. 2004). While there has been widespread concern about
the health and continued aesthetic quality of these systems due to nutrient input and
associated water quality effects, effluent and/or runoff from livestock production facilities
and municipal wastewater treatment plants may contain a number of organic
wastewater contaminants (OWCs) such as antibiotics, hormone residues, various
pharmaceutical compounds, and other trace organics that are ultimately transferred to
aquatic habitats. The frequency with which these contaminants occur in U.S. surface
waters was clearly indicated by a U.S. Geological Survey (USGS) study that found 80%
of the 139 streams sampled contained detectable levels of OWCs (Kolpin et al. 2002).
Another recent USGS study (Galloway et al. 2004) sampled surface water in Benton
and Washington counties, Arkansas, and similarly reported the presence of selected
OWCs in some streams receiving input from municipal wastewater treatment plants.
In addition to the land use characteristics stated above, the basins of the Illinois and
Lower Neosho Rivers are situated within the Ozark Plateau, an uplifted region with a
karst topography that is characterized by sinkholes, disappearing springs, and caves.
As a result of these features, surface water contaminants may enter the groundwater
and associated cave ecosystems. The presence of contaminants in water flowing
through caves is a concern since these habitats often support a highly specialized
assemblage of organisms which may be particularly susceptible to water-quality impacts
due to their generally low population densities and unique life history requirements
(Graening and Brown, 2003). Several aquatic species that are federally-listed or
considered species of special concern are known to use caves in the Ozark Plateau of
Oklahoma. These species include the Ozark cavefish, Amblyopsis rosae, federally- and
state-listed as threatened, and the Oklahoma cave crayfish, Cambarus tartraus, state-
listed as endangered. An unnamed cave crayfish, C. subterraneus, and the Ozark cave
amphipod, Stygobromus ozarkensis, both considered critically imperiled by the
Oklahoma Natural Heritage Inventory, also occur in caves of this region (NatureServe,
2005). Environmental contamination has been identified as one of the most significant
threats to cave-dwelling fishes (Proudlove, 2001), and chemical and septic system
pollution has been implicated in the loss of both invertebrate and vertebrate taxa from
cave ecosystems (Aley, 1976; Crunkilton, 1984; Simon and Buikema, 1997).
The prevalence and potential impacts of pharmaceuticals, hormones, and other OWCs
in the Ozark cave habitats of Oklahoma are currently unknown. However, given the
agricultural activities, wastewater discharges, and urban development that are occurring
in the Lower Neosho and Illinois River basins, the karstic nature of these basins, and
the recent detection of OWCs in streams within them (Galloway et al. 2004),
contamination of ground water and associated cave habitats may be occurring. The
presence of OWCs and related compounds could have significant implications for the
long-term management of cave habitats since the potential for effects due to exposure
to these contaminants may result in the need to relocate populations of some organisms
and make it necessary to revise recovery plans for those groups listed as threatened or
endangered. By determining the extent to which OWC residues are present in caves,
this project will provide an important first step toward understanding the risk these
chemicals pose to these sensitive habitats.
The objectives of this study were to 1) determine the presence of selected lipid soluble
and water soluble pharmaceuticals, hormones, and other organic wastewater
contaminants at two surface-water sites and in ground water in six caves in
northeastern Oklahoma and western Arkansas using Semi Permeable Membrane
Devices (SPMD) and Polar Organic Chemical Integrated Samplers (POCIS), and 2)
evaluate the potential for sub-lethal effects associated with exposure to water from the
sampling sites through 7-day bioassays with the fathead minnow, Pimephales
promelas, a standard US EPA test organism. 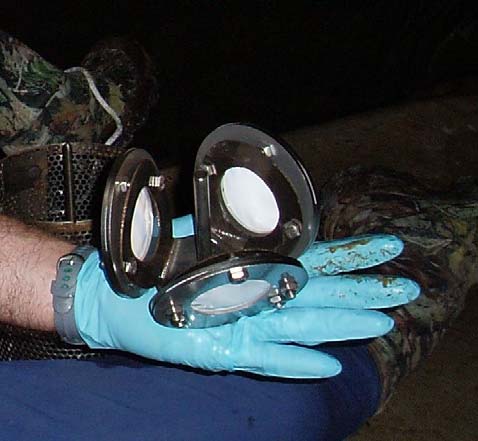 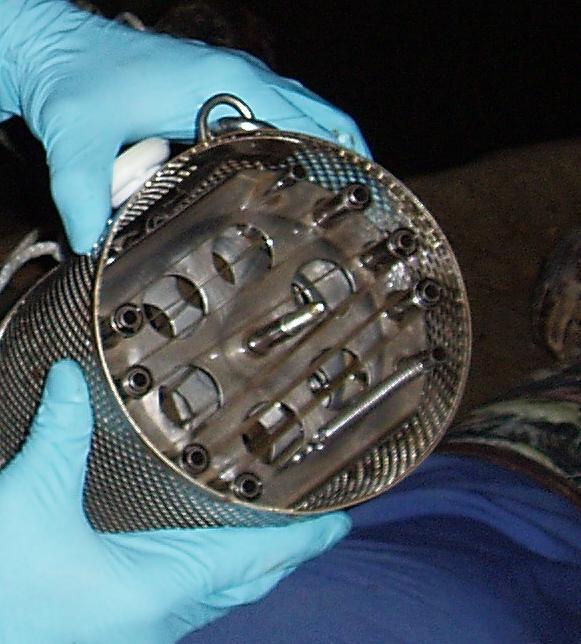 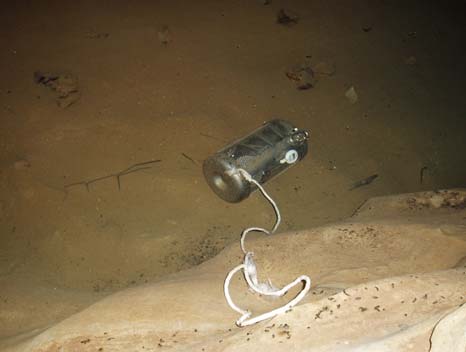 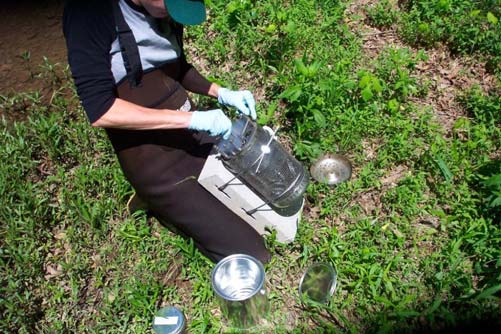 Figure 2. Deployment of a stainless steel canister in a cave (left) and at one of the
surface sites (right).

OK-Surface
January-
Stansbury
Temperature (°C)
NA 21.61/23.52 14.9/NA 13.5/14.2 14.3/NA Dissolved
NA 7.21/5.62 8.8/NA Oxygen (mg/L)
NA 6.91/6.52 6.9/NA 7.0/7.0 7.1/NA NA 4941/6022 269/NA 207/293 293/NA NA/258 4563/NA 3984 1-Value from 7 June 2006 retrieval of sampler 2-Value from 27 June 2006 deployment of sampler 3-Value from 27 June 2006 deployment of sampler 4-Value from 3 December 2005 reconnaissance of site Detection of target compounds in passive sampler extracts: Lists of the compounds detected in the extracts from the POCIS and SPMD samplers are presented in Tables 6-9. These tables are differentiated based on analytical technique used and compounds analyzed. The data presented in Tables 6 & 7 were derived from the analyses for standard wastewater compounds (e.g. Zaugg et al. 2001), the data in Table 8 summarizes the antibiotic residues detected, while that in Table 9 summarizes the results of analyses for chlorinated and other organics using the experimental, unpublished analytical technique which provides lower detection limits. An additional summary of all detections is presented in Figure 3. Regardless of the analytical technique used, more compounds were detected in the surface water sites than in caves and more were detected in the OK-Surface site than in the AK-Surface site. This is not a surprising result given that the OK samplers were placed directly downstream from the outfall of a municipal wastewater treatment plant. A total of 27 different organic wastewater compounds were detected in the POCIS and SPMD extracts from the surface water and cave sites, with the majority of these found in the extracts from the POCIS samplers (Tables 6 & 7). Of these 27 compounds, 11 OWCs were detected in the caves, and Star Cave had the greatest number of detects, followed by Cave Springs Cave. Cholesterol and diethylexylphthalate were the most commonly detected compounds in the POCIS extracts, while no consistent trend in compound detection was apparent for the SPMD extracts. Measurable levels of antibiotics/pharmaceuticals were only found in the extracts from samplers at the OK surface water site and in Star Cave, with 8 compounds detected in the surface water and 2, carbamazapine and sulfamethoxazole, detected in the cave (Table 8). In most cases, the level of antibiotic measured in these extracts was 5 times the detection limit or higher. As would be expected, the majority of compound detections were observed in the SPMD extracts that were analyzed with the experimental method allowing for lower detection limits (Table 9). A total of 44 compounds were measured using this method, with this number including those with estimated levels below the laboratory reporting limit (LRL). Since this analytical technique is still being developed, a more conservative approach was taken when interpreting the data. Specifically, a "detect" was considered to have occurred only if the level of compound in the extract was at least 2X the LRL or level measured in the blanks. With this approach, 32 detections were observed, with 23 of these occurring in extracts from the cave samplers. In the OK surface site, the most commonly encountered residues were selected BDE and PCB congeners, organochlorine pesticides, and the common wastewater contaminants triclosan and methoxytriclosan. For the caves, the most common residues were BDEs and other selected flame retardants, organochlorine pesticides and triclosan and methoxytriclosan. Most of these residues were observed in the samples from January-Stansbury and Logan caves, although Star cave also had a number of detects at lower (<2X LRL) levels. The compounds triclosan and chlorpyrifos were also targeted as part of the OWC analyses (Table 1), although chlorpyrifos was only measured using the method with nanogram detection and triclosan was detected at more sites using this more sensitive method (Table 9). Table 6. Compounds detected in extracts from the POCIS samplers. (D)=Detection at less than the laboratory reporting limit
(LRL); D=Detection above, but less than 2X, LRL or average blank concentration; D-2X=Detection at or above 2X, but less
than 5X, LRL or average blank concentration, D-5X=Detection at or above 5X LRL or average blank concentration.
Stansbury
Long Cave
4-tert-octylphenol ND (D) (D) ND ND ND ND
(D)
(D)
(D)
ND ND ND ND D
(D)
(D)
D-2X D-2X D D-2X D
Diethylhexylphthalate D D-5X (D)
(D) (D) D-5X D-2X
Diethylphthalate ND ND ND ND ND D-5X
Ethanol,2-butoxy-,phosphate ND Methylsalicylate ND (D)
(D)
(D)
ND ND ND D
(D)
Octylphenol monoethoxylates (total) ND (D)
ND ND ND ND D
(D)
ND ND ND ND ND D
(D)
tri(2-Chloroethyl)phosphate ND tri(Dichlorisopropyl)phosphate ND (D)
Detections

Published by Utah State University Extension and Utah Plant Pest Diagnostic Laboratory June 2008 Arthropod Diagnostician Extension Entomology Specialist What You Should Know • Very few insects are considered pests, and even fewer are actual y parasites of humans. • If you believe your body is infested with insects or other parasites, consult a physician immediately.

Psychotherapy Research 12(1) 1–21, 2002© 2002 Society for Psychotherapy Research HERMENEUTIC SINGLE-CASE EFFICACY DESIGN Robert ElliottUniversity of Toledo In this article, I outline hermeneutic single-case efficacy design (HSCED),an interpretive approach to evaluating treatment causality in single therapycases. This approach uses a mixture of quantitative and qualitative methodsto create a network of evidence that first identifies direct demonstrationsof causal links between therapy process and outcome and then evaluatesplausible nontherapy explanations for apparent change in therapy. I illus-trate the method with data from a depressed client who presented withunresolved loss and anger issues.