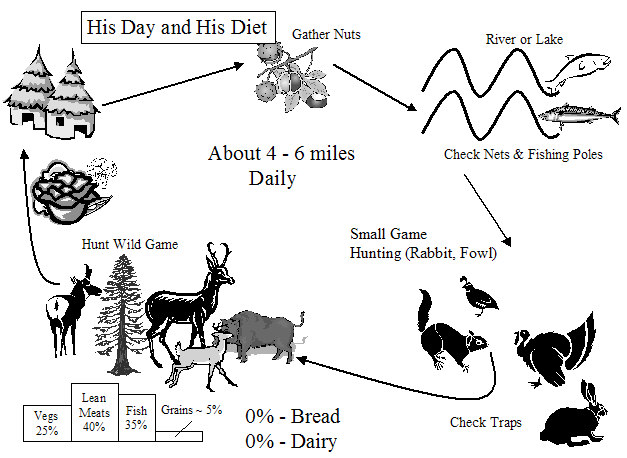 Hunter - Gatherer The AA Origin
Hunter - Gatherer The AA Origin
lunch, or even some meat that was being caught, a deer or elk as I saidbefore. From there, two, three, four in the afternoon, it's time to startback—heading towards home. By the time he got back home he hadtraveled nearly 4-6 miles round trip. Coming back home meant, turningthe meat over to the female for her part and taking care of house mending,fences, and some of the living facilities on the outside. The male is havinghis last meal around 5 or 6 P.M. that evening. That last meal would consistof green vegetables that the female had gathered during the day along withthe meat, fish or poultry that the male had caught or hunted.
I'll get to the female model in a minute, but what you end up seeing is that the male's day was one of grazing all day. He probably had, from whatI can tell, 40% lean meat which was fresh game that they'd caught, poultry,some deer or elk meat and another 30% in fish. So that is 70% right there inmeat (protein). Add about 5% in grains and wild rice that he'd had in themorning, berries and fruits, nuts. And later in the evening, that combinationof meat, plus fish plus about 25% in vegetables that the female had gatheredduring the day, ends up being a very good diet. These percentage distributionsof lean meats, poultry, vegetables and grain helped keep the African huntergatherer lean and healthy. As you can see there was no mention of dairy,eggs, bread, or potatoes in his diet.
For the female hunter - gatherer, her model of nutritional needs were a little bit different from the male, because her duties andresponsibilities were different. She didn't have to walk as far as the maledid during the course of the day, instead she likely walked 2 or 3 milestops. Her walking and work consisted primarily of communal child care,walking to the river for water and washing clothes, and then carrying thatwater back to the communal area. And that was a good walk. Down tothe river and back - sometimes twice per day. The family didn't want tobe too close to the river because wild animals would drink from the riveror water source, too. Often she would tote one, two or three kids with herand that was exercises in and of itself. After that, there was interactionwith the social structures that existed. . visiting others, taking itemsback and forth, trading, elder care, grooming, coming back and forth and 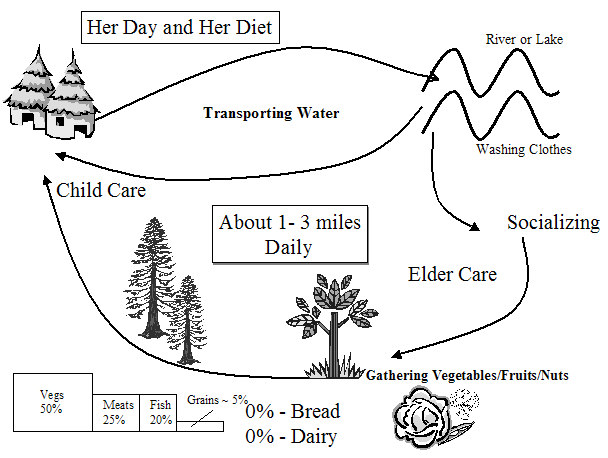 Volume 15, Number 05 American College of Veterinary Pharmacists MANAGEMENT OF CARDIOVASCULAR DISEASE IN THE HOUSEHOLD DOG or it may be from dramatically in- riosus (PDA) or Tetralogy of Fallot, As awareness of cardiovascular dis- creased afterload such as chronic pul- and are therefore not included in this ease increases in human medicine,