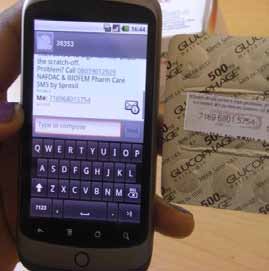 Combating Counterfeit Drugs with Mobile Phones Initiative DescriptionSproxil joined the Business Call to Action with a commitment to mobilize US$4 million to expand its efforts to empower patients and consumers in the fight against counterfeit medication in India and Kenya. Sproxil's goals:• Improve health care outcomes for up to 150 million people by 2016 Expand the use of Sproxil technology in the target markets by over 1,000 percent For every US$1 spent, Sproxil will deliver US$1,700 in social returns (i.e. lowered health care costs, reduced number of casualties, and reduced cost of lost productivity) Business ModelIn recent years, the number of counterfeited goods in developing countries has risen exponentially. Few imitation goods have as devastating an impact on consumers as counterfeit drugs. Fake prescription drugs made with cheaper–sometimes even dangerous ingredients–pose significant risks to "With our technology, we had an already vulnerable populations. Individuals that unknowingly take counterfeit opportunity to operate in emerging pharmaceuticals are at risk of death or serious bodily injury in the gravest markets and solve a critical situations. Communities also pay as these fake drugs result in increased social problem while doing well demand for health care and more invasive interventions to treat illness that commercially. For me, the two sides could be treated early on with medication. have always been self-combined." Despite the toll on developing countries, the prevalence of counterfeit medications continues to grow. According to a 2010 report by the UN Office -Dr. Ashifi Gogo, Founder and on Drugs and Crime, fake drugs represent a US$1.6 billion annual market in Chief Executive Officer, Sproxil Africa and Asia alone, with a prevalence rate between 10 and 30 percent in the developing world. Fake drugs are now making their way from the black market directly to pharmacies where legitimate drugs are being sold, making it even more difficult for customers to know that the medications they take are safe. Dr. Ashifi Gogo founded Sproxil in 2009 after witnessing firsthand the effects of counterfeit medications in his native Ghana. Considering the country's high rate of mobile penetration–over 70 percent in 2010 according to the World Bank–Dr. Gogo realized that mobile phones could help combat fake drugs in the marketplace. Sproxil developed a mobile phone-based medicine verification application that can easily and effectively identify fake drugs before consumers even leave the pharmacy. With its Mobile Product Authentication (MPA) application, consumers simply scratch a label on the packaging and text a set of unique numbers to a toll-free phone number to verify if a medicine is authentic. In response, customers immediately receive a text message back that indicates whether or not a drug is legitimate; saying "Yes, genuine" or "No, fake". If a fake product is found, a consumer is given a hotline number to call in order to report the fake product, and the hotline operators then report it to the appropriate authorities in the country. Sproxil is helping to improve health care outcomes for individuals manufacturers and distributors. The application is comprised of in communities where counterfeit medications are prevalent. The scratch-off labels and the mobile short message service (SMS). company's mobile authentication application is also helping to Sproxil provides either pre-printed labels that can be affixed reduce losses for pharmacies and pharmaceutical chains that to a box of medication or manufacturer-printed codes which are targeted by counterfeiters. This initiative is central to Sproxil's are printed directly on the box. Sproxil also works directly with core business development goal which is to expand access to this mobile phone providers in each market to negotiate the cost service throughout the developing world. of the SMS services, which then becomes part of the final unit price. Verification is accomplished by consumers using basic mobile phone handsets, so there is no need for large infrastructure Sproxil piloted its mobile verification application between investments or data connections. Since the scratch-off labels February and May 2010 in Nigeria where the government has are similar to using scratch-off vouchers to charge airtime onto been proactive in the fight against fake drugs and there is a a mobile phone, they require minimal training and education to strong mobile phone culture. Nigeria-based drug distributor use because customers are already familiar with the technology. BIOFEM Pharmaceuticals had been searching for a solution In addition, posters and other informational material are placed to address massive counterfeiting of its flagship Merck Soreno in pharmacies to advertise the service to consumers. product for Type 2 Diabetes, Glucophage. Sproxil's solution provided the company with a low-cost and efficient way to combat Today, the distributors or subsidiaries for GlaxoSmithKline, this negative trend. Working with the National Agency for Food Johnson & Johnson and Merck all employ Sproxil's technology. and Drug Administration and Control (NAFDAC) and BIOFEM, To date, Sproxil has sent more than one million text messages Sproxil launched a 100-day pilot in three of Nigeria's major cities: to verify drug authenticity. To further improve access, Sproxil Lagos, Abuja and Port Harcourt. Sproxil's scratch codes were has partnered with all global systems for mobile communication affixed to over one million sachets of Glucophage. According to (GSM) networks in Nigeria (Etisalat, Glo, MTN, and Zain), with Sproxil, Glucophage sales increased by more than 10 percent the potential of reaching 67 million users. Consumers can now in Nigeria and BIOFEM had seen a return on investment of over text on any GSM network in the country using one live short 1,000 percent, within 90 days. code, 38353. The company has been able to replicate this same service in Kenya through its partnership with Safaricom and the Since its pilot, Sproxil has been expanding rapidly in Nigeria, Kenya Pharmacy and Poisons Board (PPB), the national drug Ghana, Kenya, and India. Sproxil sells its medicine verification regulatory authority. application directly to pharmaceutical companies, drug Sproxil's Business Operations Model Innovations in Action: Sproxil 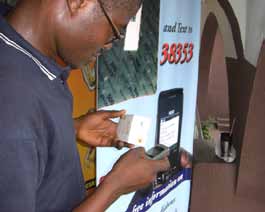 Results AchievedSince joining the BCtA in 2010, Sproxil has raised US$1.8 million in investment with expansion to three new markets; Ghana, India, and Kenya.
Business Impact Since the company was founded, Sproxil has expanded access to its service from Nigeria to Ghana, Kenya, and India and currently covers 11 pharmaceutical products that include antimalarial, diabetes, and antifungal medications. In 2011, Sproxil received US$1.8 million in investment from Acumen Fund, a non-profit impact investment fund. These new funds will help the company realize its expansion goals in target markets such as India. Sproxil generates its revenue by selling pre-printed labels with authentication codes and SMS messages directly to pharmaceutical companies, their manufacturers and distributors. The bundle price for the label and SMS comes to a couple of U.S. cents per item, Sproxil offers a and varies depending on the target market, access to analytics and support options. To date, Sproxil has served over 800,000 unique comprehensive anti- mobile numbers, a number that is growing rapidly. counterfeiting strategy for Development Impact cash-based societies, one With its ambitious business plan Sproxil estimates that by 2016, that enables consumers hundreds of millions of people will have improved health as a result of their business. By offering consumers a way to verify the authenticity of to text message an item- medicines, Sproxil reduces health risks for individuals and lowers health costs to society as a whole. Sproxil's solution will contribute to overall unique code for a rapid lower health care costs in developing countries by reducing both the number of casualties and the cost of lost productivity due to the effects response that confirms a of potentially harmful counterfeit drugs.
This initiative will contribute to reaching Millennium Development Goals (MDGs) by providing safe access to medications. Specifically MDG 6 -combating HIV/AIDS, malaria and other diseases-because patients will be certain that they are taking the right medicines and that they are effective. At the same time, with more focus on counterfeit drugs in developing countries, it will indirectly contribute to MDG 8-providing access to affordable essential drugs in developing countries. Sproxil also helps to raise awareness about the risks of counterfeit drugs and connects consumers with the brand owners of pharmaceutical products in a way never before seen in cash-based societies. This provides a communicative channel for consumers to voice concerns, share thoughts, and seek advice on products.
Sproxil projects that by 2016, the Sproxil technology could be used to verify drugs that cover up to 80 percent of all diseases, including HIV/AIDS, diarrheal diseases, childhood diseases, malaria, cardiovascular diseases, and diabetes.
Innovations in Action: Sproxil Key Success Factors Next Steps and Spin Off Effects Partnership building Sproxil is continuously seeking out new partners Partnership building is a major component of Sproxil's success.
to further disseminate its technology for new Most partnerships are brokered from company headquarters in Boston; however, Sproxil has subsidiary offices in key target markets to deal with administrative tasks and ensure delivery of service on the ground. The company works very closely with multinational mobile phone In 2011, Sproxil expanded its services to three companies to bundle the price of text messaging for its clients. The new markets: Kenya, Ghana and India. The company also collaborates with national governments, which in most company anticipates significant expansion countries are the main providers of health care, in a mutually beneficial plans in the coming years. To ensure the relationship to ensure medications are authentic. However, there is no safety of its technology and stay ahead of drug financial relationship with any government; nor is any government a counterfeiters, Sproxil does not release any source of revenue for Sproxil. information about where it will next display its technology.
Ensuring quality and security of its servicesSproxil has faced challenges finding qualified and reputable While Sproxil is currently targeting developing manufacturers for its scratch labels. The company has introduced a countries, Dr. Gogo is looking for opportunities rigorous vetting and screening process to make sure that the suppliers to expand into developed markets such as meet quality needs; especially focusing on security and reliability.
the United States, Japan and Europe as well as in other industries. For example, Sproxil Cross-national collaboration has the ability to offer barcodes that would In September 2011, Sproxil announced its first cross-national require the use of a camera phone or barcode collaboration between Greenlife Pharmaceutical Limited, a Nigeria- scanner, which would be beneficial to consumer based distributor of prescription medications, and Bliss GVS Pharma Limited, an India-based pharmaceutical manufacturing company. Nigerians are now able to verify the authenticity of a crucial antimalarial Informational Resource drug, Lonart DS, as well as medications for Type 2 Diabetes, Sproxil is also exploring the possibility of Glucophage 500mg and 1,000mg and Glucovance 2.5mg and 5mg, and providing information on health to consumers. Nizoral cream, an antifungal cream, among other medicines.
With its technology, pharmaceutical companies and health care providers can send text Using technology for national tracking of counterfeits messages that remind patients to take their Using Mobile Product Authentication (MPA), pharmaceuticals and the medications, or raise awareness on health appropriate national authorities can track the specific mobile network associated with an incoming text message and identify areas of the country with possible counterfeit activity. In Nigeria, Sproxil has also set up the first national mobile-based anti-counterfeit service in Africa with support from Nigeria's National Agency for Food and Drug Administration and Control (NAFDAC).
Published February 2012 Contact the
Email: [email protected] Tel: +1 212 906 5695 Web: www.BusinessCalltoAction.org Business Call to Action