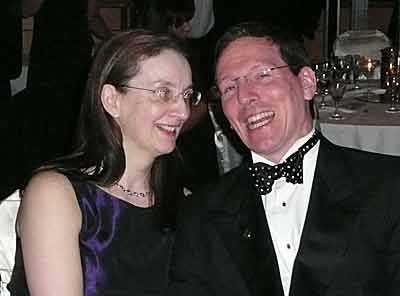 Many Thanks to all those contributors who take the time to send
Business news of Irish Jewel ery interest to 2010. If your foto is here and you would like the original (better quality, suitable for printing etc., and with al the other fotos from the relevant occasion, just ask). We can do DVD's now and can fit a lot on it. Free.
Foto at left of Aine
(Secretary RJI ) and husband James Murtagh (former RJI
President), at RJI Annual Gala Weekend on Saturday 6th
Wholesaler's reports:
Findings Ireland were down 20% for December and we are down 11%
over twelve months.
We finished over 9% up on the year. We would have finished higher only
for the disastrous weather in December.
We had 3 reps off the road for approx 7 days and only doing short trips for another week or so.
Our average price per piece is down however we are sel ing loads more pieces Happy new year.
Hi there Johnny… Here is some info from Oisin in Primastar for your newsletter.
The last 2 months have seen an improvement in business with some decent orders for
diamonds in the 1ct and above category. We have found that a lot of the public are really shopping around in great detail and are driving very hard bargains with the retail jewellers. There has been a lot of heavy discounting by the retailers who are happy to turn higher priced stock items into cash and reinvest in lower priced stock products.
In response to a question that was posed in an earlier newsletter I wish to advise that we are in a position to look at buying in second hand diamonds from the retail jewellery trade. It must be noted that it probably would only be feasible on stones that are 0.25ct and above. People can feel free to call me to discuss any such issues.
Thanking you for your efforts and support.
Oisin Ryan Prima Star Ltd 086 2109076 Greetings Johnny, it's January it must be ski time.
FJMI Report
Happy New Year to al , hope Santa delivered some business in time for New Year new beginnings, best wishes to al the FJMI members currently preparing their new col ections for the up-coming exhibition season, starting with SHOWCASE 2011 from 23rd to 26th January in the RDS.
Showcase is always a recommended visit, it al ows you the opportunity to view the new offerings and social y mingle with the rest of the Jewel ery industry, so that must be worth a day away from the desk, time out to think and look forward.
Bal ou Limited also looks forward to 2011 and wil resume its duties as International trade show reporter for "Johnny's Jewel ery News", starting with Paris in January.
From John Harrison MGD
As promised and after many delays I am final y sending you some news.
Hope yourself and Sheila are keeping wel .
As you may know we held a Christmas window competition For Festina and Zinzi silver. The prize for the winner was €4000 RRP of each brand.
On behalf of DiVad International & MGD I would like to thank al of our business partners who took part in this competition and promoted Festina & Zinzi over the 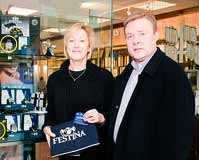 Christmas. We would also like to acknowledge the effort everybody put in to these displays. Unfortunately not everybody can win the prize and I am happy to announce the winners.
The winning window displays for Festina go too Douglas Jewellers: Carlow. Ivan & Ken Tucker with David
Buckley in the centre, below.
Gleeson Jewel ers Shannon: Rita Gleeson with John Harrison.
The Winner of the Zinzi Christmas window display goes to: Briscoe Conway Jewel ers Waterford: Edrina Briscoe Conway,
Vivienne Conway & Declan Conway (Colm Fogarty on left)
Jack Murphy Jewellers: Carla Walsh (with John Harrison) below 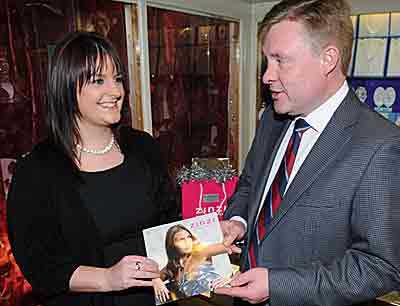 Congratulations to the winners on a job wel done and continued success with the brands in the future.
As I mentioned to you when we meet before Christmas we have had a good year with our Value range which is very much based on price and from the feedback from the trade since Christmas the sel through and prices hit the spot.
The Tesoro brand was a good addition to our range last year and again the sel through reports are good.
Considering how difficult Christmas was for al we are delighted to have some good news to filter back into the trade and hope we can offer these products to many more over the coming months.
On the watch side we had great success with the French Connection watches again the styles and price point seem to have been what the public wanted The introduction of the Jacques Farel Childers range was also very wel received.
Festina sales held their own throughout the year and have sold through wel according to our stockists. Anne Kline also performed wel over the twelve We would also like to hear any feedback on our products or any other matters.
Please contact me at [email protected]m.net Looking forward to the chal enge of the year ahead.
John Harrison 087-2368878 MGD Charlotte House Unit F1 M7 Business Naas Co. Kildare 045-888409 Zinzi Silver Jewellery
End of wholesalers.

Hi johnny and a happy new year.
I hope that 2011 is better than 2010, but I have my doubts. We struck a few records in 2010 and not one of them positive. We had the worst trading year
in living memory. We have hit rock bottom for December figures, it has got to
the stage where as any sale was a bonus (one does not expect that situation to arise in December) and what about the gold price. Talk about being slaughtered. Then to put the icing on the cake The Big Snow. What a Bol….ks of the most important trading season of the year.
On the bright side my accountant has being saying to me for years that my stock level was to high, wel next year he wil being seeing a much lower set of figures.
We have been living of the fat of the pig as I am sure is the same situation for a lot of Jewel ers.
December figures are about 10% down on a disappointing 2009 December.
What sold- Silver Silver & Silver.
Margin was cut to the bone with any reasonable offer being accepted.
Signing off now to start cutting costs "Again" December, due to the recession, the weather etc – the forecasts that were being made on radio by Retail Ireland that there would be a drop of 6.7% was very optimistic, neighbouring retailers are quoting anything up to a shortage of 60%, and for your entertainment I attach a chart, we are stil dropping, but near the bottom, if the touts are to be believed we're heading for an increased tourist season…yippee. just hang on in there.
The Pattern of December at left.
I haven't done the percentages yet but we are down on sales on last
But we wil struggle on and hope there is light at the end of the tunnel. As I see it, it can only get better. Real y look forward to your monthly report it keeps me in touch. Keep up the good work.
Happy New year to you, hope al is wel with you .
Any plans for skiing ? [Tomorrow] Business for us was very good up until the snow hit in December.
One part of the business:
Business down by 20 % for month of December, but had very strong sales
since we opened after Xmas.
Overal for year 5 % up on last year .
Other part:
Business was up 3% on last year, very strong sales after Xmas, half % down
on last year .
Usual items sel ing as expected, Branded Jewel ery, Silver very strong but mainly Branded .
High end watches made a big come back but nothing to be getting excited about, fashion brands were hit and miss.
Quality Diamond Earrings, Rings and pendants Very Strong .
Luxury fancy Jewel ery made a come back this Xmas, sales were very slow over the last two years .
Gold very slow .
Have to say optimistic about the new year, can't be any worse than last year .
December up 9%. Year down 5%. We are reasonably happy although stil
back to 2002 figures. Christmas Eve was big disappointment. I think al ot of customers shopped earlier due to fears about the weather.
Happy new year to you.
I am delighted to be up 2.5% in turnover and 5% in customer
numbers for the year.
The snow wasn't good for business, where were the council to clear the path's ? I saw the army on the 23rd December, better late than never I suppose ! Happy New year to you and your family.
We had a fairly ok Christmas. Year on year we are down 9%. Good footfal
for last few days and only smal price tags sel ing with a few exceptions.
Pandora, DKNY, Sabo al good sel ers. Two particular branded high end watches [I have to prevaricate, NOBODY wil accept criticism!!] and yel ow gold al did poorly. But we won't have to restock them! Wel Johnny Happy New Year to you and yours.
What can I say it was a hard Christmas and we were down 33% on
Christmas 2009 in saying that Christmas 2009 was only down 5% on 2008 so
hopeful y we have hit rock bottom.
2009 down 21% on 2008 (Jan-Dec)
2009 down 33% on 2007 (Jan-Dec)
Again biggest problem is peoples spends are way down with the average spend €100 - €150.
Diamond Rings - POOR Gold Chain/Pendant/Bracelet - POOR Gold Earrings - GOOD High End Watches - POOR Mid/Low End Watches - GOOD (Guess Top Brand Again) Silver Jewel ery - GOOD Costume Jewel ery - GOOD With reference to the outfit who got costs down by 43%:
what is the breakdown of figures?
Hi Johnny – see answer below, please do not mention me by name.
Seasons Greetings See below for chart of accounts that have been reduced over 24 month period, al areas of spending have been slashed, staff reduced, wages and salaries slashed, insurance reviewed downwards, people have been met and deals struck, in house repairs only, no outsourcing, if we can't do it, it won't be done and each job priced on an individual basis, negotiated settlements, al payments to self practical y ceased…there's no end to it! If it can be cut it has been, next thing wil be to reduce lighting to bring down power costs ( I can remember in my childhood going into a toy shop with only a 60 watt bulb over the counter and other lighting was only switched on as needed for the customer!.are we there yet?) Management works at the coal face … 4199-100 Purchase Ledger Disc 4400-100 Delivery & Packing 4420-100 Other Direct Costs 5000-100 Staff Salaries 5020-100 Dir's Salaries 5035-100 PAYE+PRSI 5060-100 Staff Training 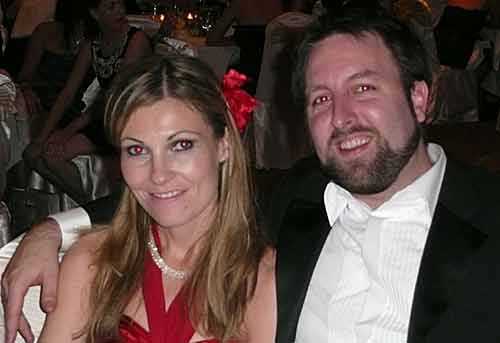