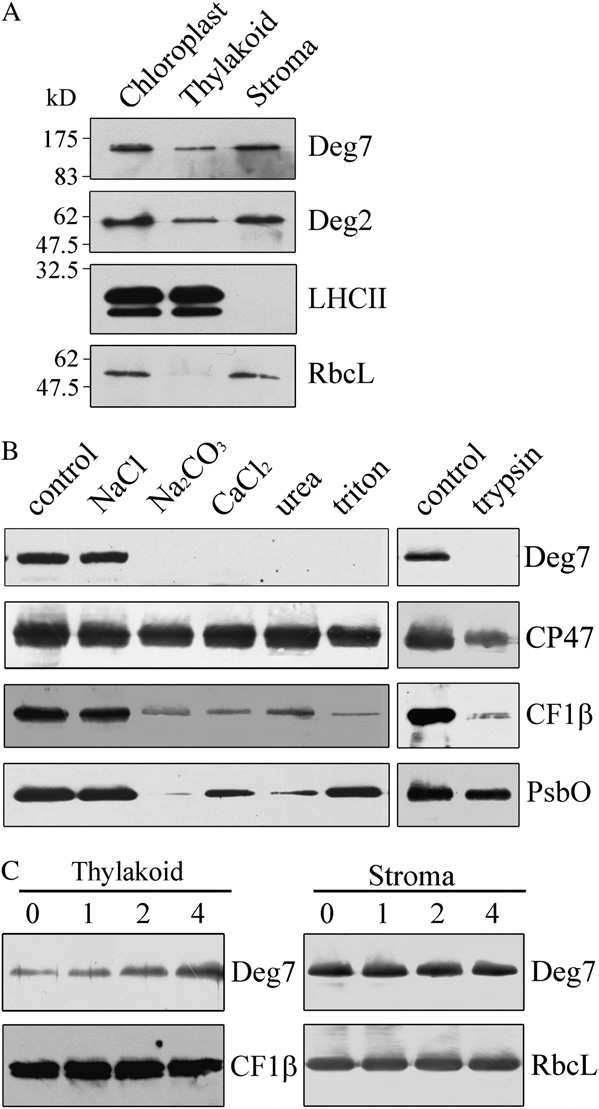 PSII Protein Degradation by DEG7 protein and is associated with the membranes. Next, toexamine the strength of Deg7's membrane association,we treated the thylakoid membranes with salts andchaotropic agents. Washing the membranes with 0.25M NaCl did not release the Deg7 from the membranes,but Deg7 was barely detectable after washing themembranes with 0.2 M Na CO , 1 As a control, we found that the integral membraneprotein CP47 was not released from the membranes bysuch treatments. High-light treatment increased theamount of Deg7 associated with the thylakoid mem-branes, and the levels of Deg7 in the stromal fractionsremained almost unchanged after exposure to high-light treatment (Fig. 1C). This may reflect an increasedexpression of Deg7 after high-light treatment.
Proteolytic Activity and Physiological Targets of Deg7 The increased association of Deg7 with the mem- branes suggested that it might function in the degra-dation of photosynthetic proteins. To examine theproteolytic activity of the recombinant His-taggedDeg7, we incubated it with a mixture of a-, b-, and k-forms of casein. b-Casein is the preferred substratefor assaying bacterial DegP activity under in vitroconditions (Lipinska et al., 1990). b-Casein was effi-ciently degraded by the fractions containing overex-pressed Deg7, and the a- and k-forms remainedunchanged under our experimental conditions (Sup-plemental Fig. S4). More than 50% of the b-casein wasdegraded within the first 30 min. These results indi-cated that the recombinant Deg7 was proteolyticallyactive.
Next, we examined whether Deg7 is proteolytically active toward photosynthetic proteins. Since the DegPprotease has been shown to degrade damaged ormisfolded proteins (Gottesman, 1996; Pallen andWren, 1997; Clausen et al., 2002), the thylakoid mem- Figure 1. Immunolocalization and expression of Deg7. A, Intact branes used in this experiment were first subjected to chloroplasts were separated into stroma and thylakoid membranes.
high-light treatment (1,800 mmol m22 s21) for 90 min at Proteins in each fraction were resolved by SDS-PAGE, and the location 0°C. Treatment with high light causes irreversible of Deg7 was determined by immunoblot analysis. B, The thylakoid oxidative protein damage, which subsequently in- membranes from mature Arabidopsis leaves were treated with trypsin duces conformational changes in proteins, making for 30 min at 25°C or incubated with 250 mM NaCl, 200 mM Na2CO3, them vulnerable to proteolytic degradation (Prasil M urea, and 0.05% Triton X-100 for 30 min at 4°C. After these treatments, the thylakoid proteins were separated by SDS-PAGE et al., 1992; Aro et al., 1993; Andersson and Aro, and immunodetected with anti-Deg7, anti-CF1b, anti-PsbO, and anti- 2001). The thylakoid membranes isolated from leaves CP47 antibodies. CF1b, PsbO, and CP47 were used as markers.
exposed to high light were treated with 50 mmol Membrane preparations that had not been subjected to any of these EDTA to inhibit the endogenous FtsH proteases. They treatments were used as controls. The experiments were repeated five were then incubated with or without recombinant times independently, and similar results were obtained. Results of a Deg7 in the dark at 37°C. In the absence of recombi- representative experiment are shown. C, Expression of Deg7 associated nant Deg7, the D1, D2, CP43, and CP47 protein levels with the thylakoid membranes. The detached leaves, floating adaxial remained unchanged and no degradation products side up on water, were illuminated with a photon flux density of 1,800 were detected (Fig. 2A). However, when recombinant mmol m22 s21 for 1, 2, and 4 h. Then, the thylakoid and stroma proteins Deg7 was added to isolated thylakoid membranes, the were prepared, and the proteins were subjected to SDS-PAGE andimmunoblot analyses.
amounts of full-length D1, D2, CP43, and CP47 pro-teins decreased with time, and polypeptides of 20 kDfor D1, 29 kD for D2, 19 kD for CP43, and 19 kD for by trypsin, while the lumen protein PsbO was pro- CP47 were immunodetected using antibodies raised tected from trypsin treatment (Fig. 1B). These results against the DE loop of the D1 protein, D2 protein, indicate that the Deg7 protein is a chloroplast stroma CP43 protein, and CP47 protein, respectively (Fig. 2A).
Plant Physiol. Vol. 152, 2010 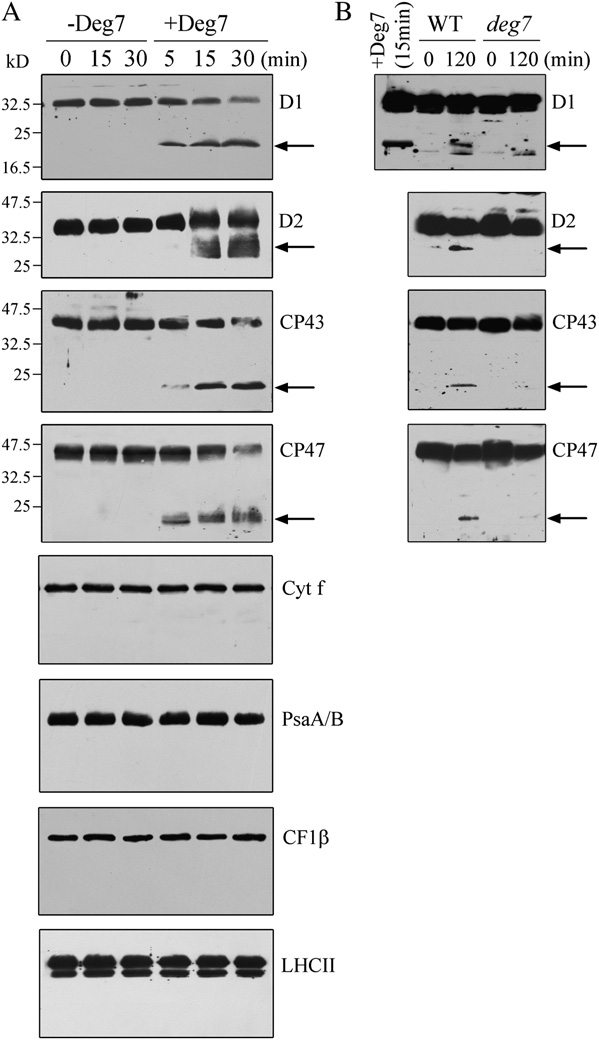 using isolated PSII and anti-CP47 for calibration (datanot shown), which showed a large excess of PSII overprotease.
Functions of PDZ Domains with Respect to the Activitiesof Deg7 To determine the function of the PDZ domains in regulating the proteolytic activities of Deg7, we ex-pressed a series of Deg7 proteases that contain zero totwo PDZ domains in vitro (Supplemental Figs. S6–S8).
Regardless of the presence of either one or two PDZdomains in the truncated Deg7 protein, the levels ofPSII core proteins D1, D2, CP43, and CP47 decreasedand the specific degradation fragments of their corre-sponding proteins were not detected. When the trun-cated Deg7 without any PDZ domains was incubatedwith the thylakoid membranes, the amounts of notonly PSII core proteins D1, D2, CP43, and CP47 butalso LHCII, PsaA/B, Cyt f, and CF1b were reduced.
Association of Deg7 with PSII The proteolytic activity of Deg7 toward PSII core proteins suggests that Deg7 is associated with PSII. Totest this possibility, the thylakoid protein complexesseparated on a blue native gel were further subjectedto denaturing SDS-PAGE and immunoblot analysisusing specific antibodies. Our results showed that theDeg7 protein and PSII complex comigrated on the gel(Supplemental Fig. S9). Next, pull-down experimentswere performed with recombinant Deg7 fused to anN-terminal His tag. The purified His-Deg7 fusionprotein was incubated with n-dodecyl b-D-maltoside(DM)-solubilized thylakoid membranes. After wash- Figure 2. Degradation of photodamaged PSII proteins by recombinant ing nickel-nitrilotriacetic acid agarose (Ni-NTA) resin Deg7. A, High-light-treated thylakoid membranes (10 mg of chloro- with buffer, the bound proteins were separated by phyll) were incubated with (+Deg7) or without (2Deg7) purified SDS-PAGE and examined by immunoblot analysis recombinant Deg7 (0.5 mg), and the degradation of thylakoid proteins (Fig. 3). The PSII proteins D1, D2, and CP47 were was detected by SDS-PAGE and immunoblot analyses with anti-D1, detected when the His-Deg7 fusion protein was used anti-D2, anti-CP43, anti-CP47, anti-Cyt f, anti-CF1b, anti-PsaA/B, andanti-LHCII antibodies. Molecular mass markers (kD) are to the left. B,Thylakoid membranes isolated from wild-type (WT) and deg7 leaveswere exposed to high-light illumination for 2 h. The thylakoid proteinswere separated by SDS-PAGE and immunodetected with antibodiesraised against the D1, D2, CP43, and CP47 proteins. The degradationfragments are indicated with arrows. Similar results were obtained intwo additional independent experiments. Results from a representativeexperiment are shown.
Immunoblot analysis with anti-Cyt f, anti-LHCII, anti-CF1b, and anti-PsaA/B antibodies showed that thelevels of these proteins remained almost constant in the presence of recombinant Deg7 (Fig. 2A). When the Interaction of Deg7 with PSII. Ten micrograms of the Deg7- His tag fusion protein coupled to Ni-NTA resin was incubated with 100 thylakoid membranes were isolated from the plants mg of DM-solubilized thylakoid membranes. Bound proteins were that were not exposed to high-light treatment, the eluted, separated by SDS-PAGE, and subjected to immunoblot analysis photosynthetic proteins were not degraded by recom- with anti-PsaA/B, anti-D1, anti-D2, anti-CP47, anti-Cyt f, and anti- binant Deg7 (Supplemental Fig. S5). The relative mole CF1b antibodies. Similar results were obtained in two additional ratio of Deg7 and PSII was estimated to be about 1:10 Plant Physiol. Vol. 152, 2010

PSII Protein Degradation by DEG7 in the assay. In contrast, the PSI protein PsaA/B, the Increased Sensitivity of the deg7 Mutants to High Light protein Cyt f, and the ATP synthase protein CF1b were not detected when the solubilized thyla- To determine whether Deg7 is involved in photo- koid membrane and the resin were incubated in the inhibition and repair processes, the F /F presence or absence of His-Deg7 (Fig. 3).
sured in the wild-type and deg7 plants under high-lightillumination (1,800 mmol m22 s21). In the absence oflincomycin, within 2 h of illumination at a lightintensity of 1,800 mmol m22 s21, F /F declined in the T-DNA Insertion Mutants of deg7 wild-type and mutant leaves to about 53% and 39%, To study the in vivo function of Deg7, we obtained respectively, of the dark-adapted values (Fig. 5A).
Arabidopsis lines from the SALK collection. The deg7 These results clearly demonstrate the increased pho- mutant line (SALK_075584) contains a T-DNA inser- tosensitivity of the mutants. In the presence of linco- tion within the 1,417-bp sequence downstream of the mycin, the decline of F /F in the wild-type leaves was ATG codon, and this was confirmed by PCR and more rapid and continued until F /F subsequent sequencing of the amplified products proached about 10% of the dark-adapted values (Fig.
(Supplemental Fig. S10, A and B). Reverse transcrip- 5A). Interestingly, in the presence of lincomycin, the tion (RT)-PCR analysis showed that expression of the decline in F /F in the deg7 mutants was similar to that Deg7 gene was not detectable (Supplemental Fig.
observed in the wild-type leaves during the same S10C). Further immunoblot analyses revealed that photoinhibitory light treatment (Fig. 5A). Since linco- Deg7 protein was not detectable in the deg7 mutant mycin blocks the repair of PSII by inhibiting de novo and that the levels of Deg7 in the complemented plants protein synthesis in the chloroplast, these results sug- were comparable to those in the wild-type plants gest that the wild-type and mutant leaves display (Supplemental Fig. S10D). When grown under 120 similar rates of PSII photoinhibition.
mmol m22 s21 light, the growth rates of the deg7 To establish whether the high susceptibility of the mutants were comparable to those of the wild type deg7 mutants to photoinhibition is related to PSII (Fig. 4A). Chlorophyll fluorescence analysis showed protein turnover, we analyzed the PSII protein con- that the maximal photochemical efficiency of PSII tents of the thylakoid membranes in the wild-type and (F /F ) was similar between the deg7 plants (0.82 6 mutant plants under high-light illumination in the 0.02) and wild-type plants (0.83 6 0.01).
presence of lincomycin. Under high-light illumination To examine the steady-state levels of thylakoid and in the presence of this inhibitor, the levels of the proteins, immunoblot analyses were performed with PSII proteins D1, D2, CP43, and CP47 gradually de- antibodies raised against specific subunits of the pho- clined in the deg7 and wild-type plants, but the rate of tosynthetic protein complexes (Supplemental Fig.
reduction was slower in the mutant (Fig. 5B). The S11). Our results showed that levels of the thylakoid levels of PsbO, another PSII protein, and the PSI proteins, including D1, D2, LHCII, PsbO, and CP43 of protein PsaA/B were found to be relatively stable in PSII, PsaA/B of PSI, Cyt f of the Cyt b f complex, and both the wild-type and mutant plants.
CF1b of ATP synthase, were not altered in the deg7 Next, we performed an in vivo labeling experiment mutant. The levels of Deg1, Deg5, Deg8, and FtsH to follow the turnover of newly synthesized chloro- were also not changed in the mutant.
plast proteins (Fig. 5C). Our results showed that the Figure 4. Phenotypes of deg5, deg7, deg8, deg2 deg7, deg5 deg7, and deg8 deg7 mutants and wild-type (WT) plants. A, Four-week-old deg5, deg7, deg8, deg2 deg7, deg5 deg7, deg8 deg7, and deg7 complemented mutants and wild-type plants grownunder a photon flux density of 120 mmol m22 s21. B, Two-week-old deg5, deg7, deg8, deg2 deg7, deg5 deg7, deg8 deg7, anddeg7 complemented mutants and wild-type plants grown in a growth chamber under a photon flux density of 120 mmol m22 s21and then transferred to a greenhouse for another 2 weeks with a maximum photon flux density at noon of about 1,000 mmolm22 s21.
Plant Physiol. Vol. 152, 2010

Cost effective C3-fermentation chemistry The NordBioChem's way out of Fossils Cologne, April 7th 2016 NordBioChem will in following show, that • an efficient and competitive C3-fermentation-chemisry is available and next to PLA • a high variety of C3-Bio-Chemicals like propylene oxide, propylene glycol, their derivatives, acrylates as well as many other basic and new chemicals could be produced.